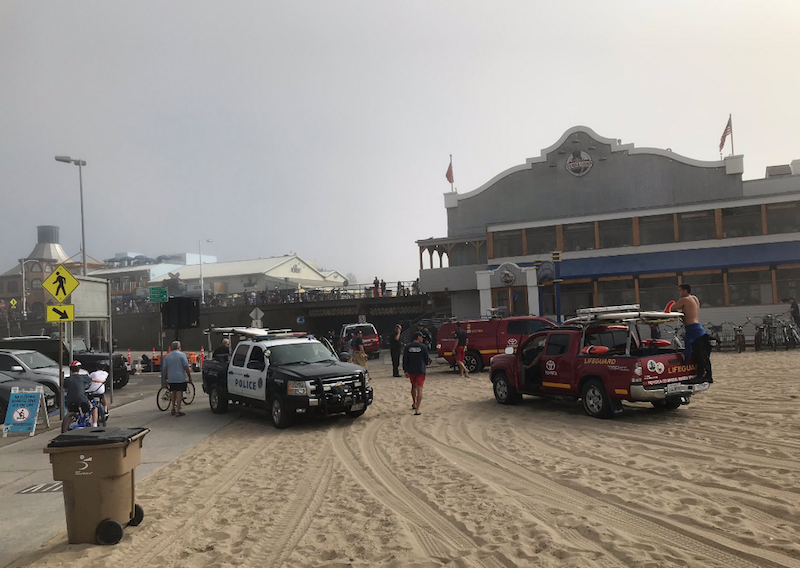 Jonathan David Krawitz, a 45-year old man, is in custody for assaulting an off-duty Santa Monica Fire Department (SMFD) captain near the Santa Monica Beach and attempting to evade arrest by swimming for hours in the ocean.

On Saturday, October an off-duty SMFD captain was working a private event at Crescent Bay Park, to the south of the Santa Monica Pier on Ocean Avenue. Krawitz entered the event footprint and began to create a disturbance. Krawitz chased patrons around and threw an unknown object at SMFD personnel. The subject also threatened to harm the SMFD personnel.

At about 9:49 a.m. the Santa Monica Police Department (SMPD) responded to a radio call for service regarding the disturbance. When officers arrived, Krawitz ran away from the event westward onto the sand, into the ocean and a lengthy aquatic chase ensued.

“The subject swam around the ocean refusing to surrender or come to the sand for several hours. LA County Lifeguards, SMPD Harbor Guards and LASD Marina Del Rey arrived with their boats to monitor the subject,” said SMPD Lieutenant Saul Rodriguez.

Krawitz eventually exited the water around 12:30 p.m. and was taken into custody at the Lot 1 North lot (next to the Santa Monica Pier), a half a mile away from where he entered the ocean.

Krawetz has been booked for Criminal Threats and Resisting/Delaying arrest and is being held on a $50,000 bail.