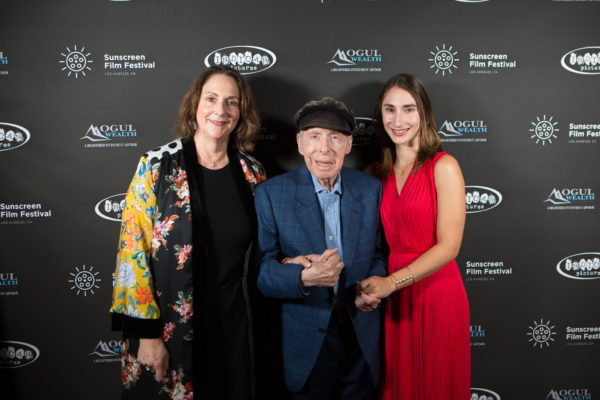 The documentary is a memoir on the remarkable life of 97-year-old Dr. Bernard W. Bail, a highly decorated World War II Jewish veteran who was shot down over Nazi Germany and rescued by a secret love affair with his German nurse—a pivotal experience that exposed him to a new world of spirituality and feelings and ultimately to the power of the feminine. Dedicated to healing mental anguish, he became a doctor and esteemed psychoanalyst who continued where Freud stopped, developing the “mother’s imprint,” a radical new theory that strikes at the root of all mental illness. Bail believes it is the centuries of abuse and oppression women have suffered that has brought us to today’s tipping point and that women must have a place at the table if there’s to be peace in the world.

“The system is broken,” Dr. Bail said “It is not a particularly American phenomenon. The world has another name for it. The world calls it the ‘human condition. The film, ‘And Now, Love’, heartens me because it provides a hitherto unknown fact to enlighten a many thousand year problem.”

The film chronicles Bail’s personal journey as he courageously fights his way out of Philadelphia’s immigrant ghetto, across war-torn Europe and through the resistance of the psychoanalytic establishment to new ideas. For his military service during World War II, Dr. Bail received the Distinguished Service Cross, three Distinguished Flying Crosses, five Air Medals, five Battle Stars in the European Theater of Operations, a Purple Heart, a Prisoner of War Medal, and the 44th Bomb Group Presidential Citation. In addition, in 2006, the French government awarded Dr. Bail the French Legion of Honor, the highest military honor bestowed by France.

“My father used to often fly his single-engine plane into the Santa Monica Airport to visit me at my office of almost 30 years, which is adjacent to the runway. I treasure those memories. Additionally, from my vantage point, I’ve watched the warplanes (now recreational) come and go and have thought hard about how they began their existences in the service of war,” said Dr. Bail’s wife Cynthia. “The film, ‘And Now, Love’, definitely stirs up the past in terms of individual and universal memories and we learn how to positively make use of what has happened to us in order to make a better place for ourselves individually and universally.”

The screening of “And Now, Love” will be presented at the Santa Monica Public Library Saturday, October 13th at 2:00 pm, in the main library auditorium). For additional information on the Santa Monica screening visit http://www.andnowlovethemovie.com or call (310) 458-8600.