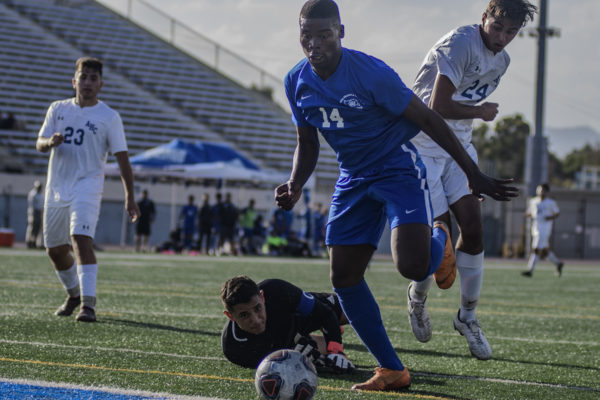 The Santa Monica College Corsairs men’s soccer team has hit their stride as of late, losing only one game in the past month. This past week, the men picked up one victory while dropping their first game since September 18.

On Friday, October 12, the Corsairs took on Allan Hancock College in a home game at SMC. The men got off to a quick start, with a goal by  Cyrille Njomo in the third minute of play. The rest of the first quarter was a battle of defense, with neither team scoring.

The Corsairs started off the second half of the game with a bang, with a goal by Jaylen Erhahon in the 50th minute followed by another goal by Narciso Cervantes in the 55th minute. The 3-0 lead was all the men needed to pick up their ninth win of the season.

On Tuesday, SMC was right back at in Oxnard and while the  Corsairs may have dropped their game at Oxnard College, with the season a little more than halfway over the squad finds themselves in a great position.

After the 3-2 loss to Oxnard, the Corsairs’ record stands at 9-2 with three ties. The loss was the first defeat of the men since they lost to Rio Hondo College on September 18.

On Friday, the men will take on Moorpark College in a 4 p.m. home game at SMC. On Tuesday, the team will travel north again, for a 7 p.m. game at Santa Barbara City College.