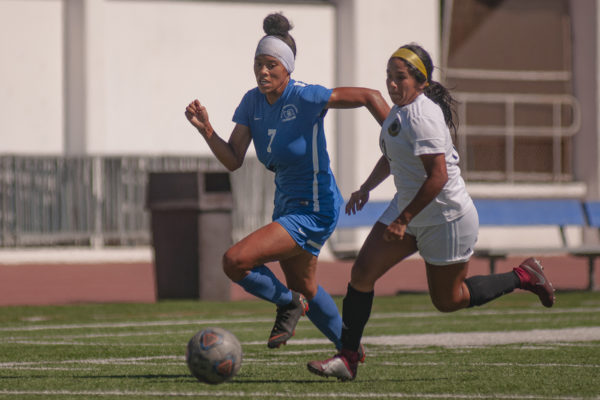 The Santa Monica College Corsairs women’s soccer team have started off their 2018 campaign in an impressive fashion, with five wins, one loss and with four draws, they have shown their opponents that they are a tough team to beat.

On September 21, SMC traveled to LA Harbour College and found themselves trailing 1-0 within the first 2 minutes of the game. In the 17th minute, however, Filippa Struxsjo answered back for the Corsairs with a goal of her own to tie the game.

After LA Harbor scored a second goal in the last minutes of the second half to go up 2-1, SMC came out firing to start the second half, shooting  22 shots while LA Harbor’s goalkeeper recorded 9 saves. Still trailing at the end of the half with no time left on the clock, SMC took advantage of a pen

alty kick that was awarded for a handball. Filippa Struxsjo stepped up and made a shot to end the game in a 2-2 tie.

On Tuesday, September 25, the Corsairs were right back at it in an away game at Ventura College. In a game that highlighted the defensive prowess of both teams, SMC and Ventura battled for 90 minutes with neither team scoring a goal.

In the 78th minute, the Corsairs lost a player to a red card, but over the final 12 minutes, Ventura was unable to score, leading to a 0-0- draw.

After all these draws, the Corsair women took on Antelope Valley Collge on Friday, September 28 and emerged with a 4-3 victory. Antoinette Saldana led the scoring for SMC with two goals with Beverly Bourdet and Dayli Ramos each picking up goals of their own.

The Corsairs’ next game is Tuesday, October 2 versus Moorpark College at 3 p.m. home at SMC.

With a 6-1-2 record, the men’s soccer team has shown all their opponents they are a force to be reckoned with.

On Friday, September 21, the men traveled down LA Harbour College for an away game. After battling for 90 minutes with no points scored, the game ended in a 0-0 tie. SMC goalie Aydin Kose continued his dominating season, saving two shots on goals. On the year, Kose has only allowed two goal.

On Tuesday, September 25, the Corsairs took on Citrus College in another away game. Santa Monica got off to an early lead with a goal by Ludovico Riviello in the 28th minute but Citrus responded in the second half with a goal by Patrick Luevano in the 48th minute.

On Friday, September 28, SMC will host Glendale for a 1 p.m. game. Glendale is 0-7 on the season, meaning SMC should be the favorite to win this game.