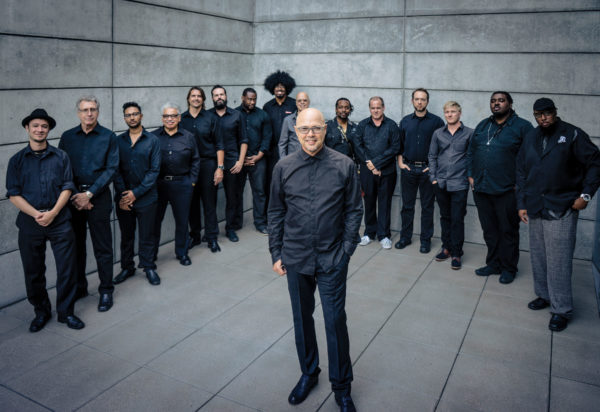 The Eli and Edythe Broad Stage in Santa Monica presents pianist/composer/arranger John Beasley who will bring the smashing, four-time GRAMMY®-nominated big-band MONK’estra to The Broad Stage for the first time on Friday, October 12. Capturing the spirit of Thelonious Monk’s singular music in fresh arrangements flavored with contemporary sounds that critics have called “some of the most mesmerizing big-band music of recent memory.”

John Beasley has built upon Monk’s foundational legacy to create one of the most innovative bodies of music celebrating the legendary pianist-composer Thelonious Sphere Monk. Beasley’s arrangements are refreshingly 21st-century in sound. They incorporate hip-hop and bossa nova, Afro-Cuban jazz and funk, fusion and free jazz, without ever losing the essence of Monk’s genius. And in Beasley’s intricate writing for the reeds, and his dramatic brass parts, Beasley takes us from the swamps of his own native Louisiana to the sleek towers of Monk’s adopted hometown, New York. Monk’s songs inhabited a fantastic world of their own, spawning unique forms and colors, stories and pictures, and rewriting the rulebook as they took shape. They deserve nothing less than a similar explosion of invention and novelty when re-conceived for the orchestral idiom.

“I think musicians are still catching up with what Monk was telling us,” says Beasley. “I’ve discovered how pliable his music is, like any great composer – for example, Bach, who sounds great in any tempo. Monk’s music is so open to interpretation because his compositions have such a solid story. I figured out how to elongate his sophisticated melodies and voice things in a non-traditional way. And through it all, those unforgettable melodies just stick with you. Especially when played by Monk himself – as in this inventive evening of cross-discipline experimentation.”

Tickets are available by calling 310.434.3200 or visiting www.TheBroadStage.org.  Jazz & Blues is made possible by a generous gift from Richard and Lisa Kendall.

By admin October 3, 2018
in Life and Arts, News
Related Posts