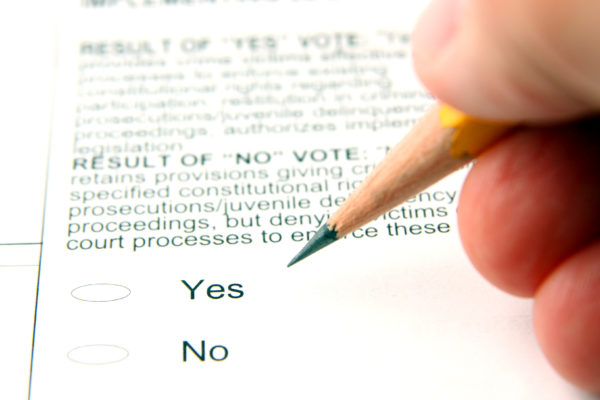 Folks with little faith in California voters have won at least a partial victory this year. For decades, since the great Progressive (a tag worn a century ago mostly by moderate Republicans) Gov. Hiram Johnson created the ballot initiative, critics have railed against direct democracy, claiming an uninformed public often makes major mistakes.

After decades of griping about “budgeting by initiative,” those skeptics managed to get a law passed in 2014 allowing legislators to change or eliminate initiatives even after they’ve qualified for the ballot, so long as initiative sponsors agree to it.

Voters will see the first results of that law this fall: A significantly shorter ballot than they would otherwise have encountered, even though 11 measures remain up for public decisions.

Yes, voters will make thumbs up or down choices on issues from $17 billion in proposed bonds to rent control and repeal of last year’s gasoline tax increase. They will still get to determine whether veal calves, pigs and chickens get more rights than they now enjoy and whether folks over 55 will be able to carry their Proposition 13 property tax limits across all county lines when they sell their homes, instead of just some.

But voters will not get to make decisions about consumer privacy or soda taxes or even who will pay to clean up leaded paint in homes built since 1951.

Instead, sponsors who gathered enough voter signatures to put initiatives on those issues before the voters made deals with state legislators and their ballot measures vanished.

So a ballot that could have been much more interesting disappeared in the face of compromises that satisfied big-money interests but might not have pleased the mass of voters.

The farthest-reaching of these compromises involved Internet consumer privacy. Under new rules signed into law by Gov. Jerry Brown just two hours after they passed the Legislature, Californians now have a right to know what information Internet giants like Google and Yahoo and eBay and Amazon have about them. They can also prohibit companies from selling that information and can ask companies to delete their information after they learn what’s been gathered.

That’s a far cry from the ballot initiative which this new law replaces, which would have forced companies to get consumer permission to gather, maintain and sell information on what Internet searches individuals make, what they buy on the ‘Net, what products they look at but don’t buy and much more.

Consumers can only sue in the case of a large leak of information, not over individual exposures.

This was an example of compromise of the sort intended by lawmakers who created the new system for removing initiatives after they qualify. It probably headed off a campaign that would have cost companies and consumer groups $50 million or more. Too bad for the television, radio, newspaper and direct mail companies that would likely have gleaned most of that money.

Another compromise removed an initiative run by major paint makers aiming to force the state to loan the companies up to $2 billion for removal of paint that contains lead in 10 cities and counties that won a lawsuit against Sherwin-Williams, du Pont and others. The initiative was withdrawn in exchange for legislators pulling three bills that would have penalized the companies even more.

And there were soda taxes. Makers of carbonated drinks had qualified an initiative that would have raised the vote-percentage threshold for passing any new local tax, but agreed to pull it off the ballot in exchange for a new law placing a 13-year moratorium on any new soda taxes.

The result is a ballot that’s far from the longest ever seen by California voters, but still lets them make important decisions on issues like spreading rent control more widely and lowering gas taxes a bit. But it also isn’t quite the ballot it could have been, as three key choices were gone even before campaigns on them could get started.