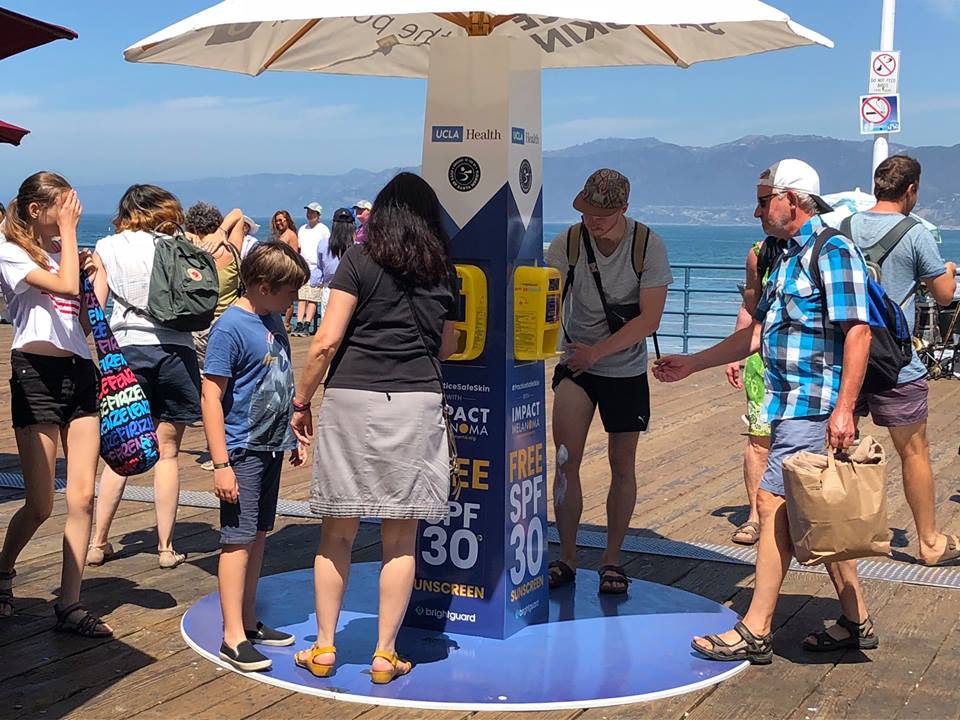 Sunscreen is a vital part of healthcare, which is why BrightGuard partnered with UCLA and IMPACT Melanoma this year to launch a public health campaign to encourage and support the use of sunscreen.

BrightGuard Chief Sales Officer, Vice- President and Co- Founder Alex Beck was a driving force behind the program, which rolled out in July and ended early November.

The program was well received within the community with positive feedback from many of the people who used the dispensers. “This is a cancer preventative campaign,” Beck continues. “What we’re in business for and the objective of most of our initiatives is to reduce the frequency of sunburns. One way we do that is we provide sunscreen for free to the public. To date, we have used 74 cases of sunscreen which is around 80 gallons of all natural sunscreen. It’s incredible. We haven’t seen usage rates of this nature anywhere else in the country.”

Due to its popularity and overwhelming support from the dedicated people involved, Beck plans to replicate the program again next year. “We would like to start it earlier and launch in May because May is Melanoma Month,” Beck continues. “I’d like more traction in Malibu as well. The program went very smoothly this year from an operational standpoint, but from a deployment standpoint, I’d like to see it expanded; more dispensers out there for a longer period of time.”

In addition to bringing the program back next year, certain locations in Santa Monica will have dispensers available year- round for public use. “It is important in almost any environment to wear sunscreen year-round,” Beck explains. “Even in ski resorts, you’re exposed to higher radiations and reflection off snow amplifies UV. In the water, if you’re surfing or swimming, you get amplified radiation.”

Beck founded BrightGuard five years ago after a close friend contracted malignant melanoma. “He’s okay now, but it really rocked us,” Beck explains. “My business partners and I looked into this cancer, and we found out it was preventative. The Surgeon General issued a report that same year saying the current skin cancer epidemic went up 200 percent since the 1970’s. He urged people to raise awareness and seek prevention. Then our dispenser was essentially born. This company is based solely on the mission to prevent skin cancer, and to be a part of that means absolutely the world.”

BrightGuard alongside IMPACT Melanoma and UCLA went above and beyond spreading the word about skincare and its essential role in overall health. Thanks to the success of their campaign, more people than ever had access to sunscreen and learned about the importance of protecting their skin on a regular basis.

If you happened to grow up in the 90’s, you might remember the Baz Luhrman hit where he famously offered a great piece of advice: “If I could offer you only one tip for the future, sunscreen would be it.”

By admin November 4, 2018
in Life and Arts, News
Related Posts