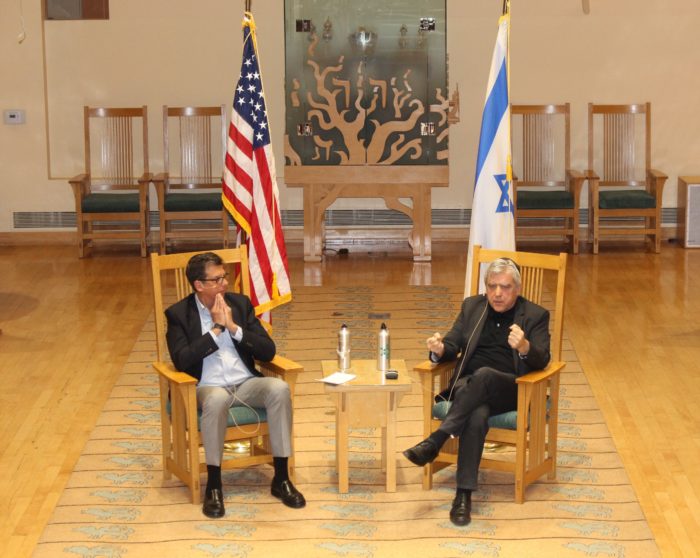 On Wednesday, November 14 in the Pacific Palisades, Kehillat Israel and its Israel Matters committee as hosted David Suissa, President of Tribe Media/Jewish Journal, for a conversation about why American Jews’ relationship with Israel still matters.

In the beginning of the discussion, Suissa talked about how when addressing the issue of war with Palestine, it is essential to understand the experience and perspective Israelis have developed over years of suffering.

One of the ways Suissa suggested Americans can relate better to Israelis is through a reverse birthright program.

“Just like we have Jews who go to Israel and get to know Israelis, we need to bring Israelis to America so they get to know us,” Suissa said.

Suissa also touched upon anti-semitism in the United States in the wake of the October 15 shooting at a Pittsburgh synagogue that left 11 dead. While Suissa acknowledged the suffering and trauma the event caused, he cautioned that media has overblown the degree of antisemitism that exists in the country.

“The human brain is wired to put a bigger emphasis on trouble than on goodness. If a tiger is coming towards you, it is more important to run away from the tiger than to go and get the vegetables or the food,” Suissa said. “Media companies have taken full advantage of that. They make a lot more money when they give you trouble. I know I double the clicks on the Jewish Journal website when I put ‘anti-semitism’ in the headline.”

Suissa pointed out how throughout the history of the United States, there has only been one other shooting in a synagogue, an event in the 1960s that was carried out by a Jew.

“Just think about how many synagogue services have happened all through America. Tens of millions of synagogue services over the centuries. Just think of it. Maybe fifty million synagogue services, and just to think only one time was there ever a Jew hater who came into a synagogue and shot Jews. In 200 years, since the beginning of America, it only happened once,” Suissa said. “But because the brain is wired for trouble, we went crazy.”

Suissa also discussed what he anticipates the Trump Administration’s Israeli-Palestinian deal might look like, based on information writers at the Jewish Journal have acquired.

“They are going to try to make a deal that doesn’t force settlers to leave,” Suissa said. “They sort of realize there are some issues that are just too difficult to accomplish and forcing 100,000 Jews out of their homes is just a potential civil war.”

Suissa, added, however, that at the end of the day, he does not think a deal will come to fruition.

To listen to the full conversation, visit http://podcasts.kitunes.org/?name=2018-11-16_american_jews_and_israel_-_why_the_relationship_still_matters_-_david_suissa.mp3.

Kehillat Israel is an inclusive Jewish community, which honors diverse religious and spiritual backgrounds. Grounded in Jewish cultural and religious tradition, and guided by the core Reconstructionist principle to value both the wisdom of the past and the need for evolving belief and practice, KI seeks through prayer, learning and Tikkun Olam to create a sacred space in which its members of all ages may find meaning, purpose and joy. For more information, please visit https://www.ourki.org/.