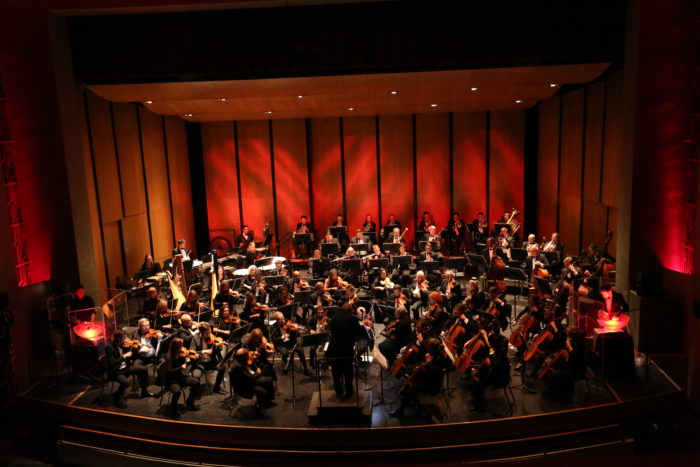 It’s the time of year for holiday cheer, and to kick off the festivities, the Santa Monica Symphony (SMS) will present a free concert of music from the movies, plus a selection of movements from The Nutcracker Ballet, on Sunday, December 2nd at 7 PM in Barnum Hall (600 Olympic Blvd).

“I wanted to put together a fun program using absolute favorites from the repertoire,” said SMS Music Director and Conductor Guido Lamell.

The show will begin with a performance of the awe-inspiring Sunrise Fanfare from Richard Strauss’ Also Sprach Zarathustra, made famous by its usage in the film “2001: A Space Odyssey”. According to Lamell, the Fanfare is a great example of an iconic piece of classical music not composed for the movies, but used to great effect in a famous film.

The orchestra will also perform Richard Wagner’s spectacular Ride of the Valkyries, from the opera “Die Walküre”. This is one of Wagner’s most famous single movements and was first brought into film in Birth of a Nation. It was later included with greatest impact in the film “Apocalypse Now” by Francis Ford Coppola.

“It has a fantastic, overwhelming force to it,” Lamell said. “And in Coppola’s film, it is blasted over the countryside from loudspeakers mounted on a massive squadron of helicopters during their assault on a North Vietnamese-controlled village as a form of psychological warfare. It is truly one of the most powerful works ever composed for an orchestra.”

John Williams’ brilliant jazz piece Escapades, from the film “Catch Me if You Can”, will close out the first half of the program, featuring renowned saxophonist Harvey Pittel. This is an example of the more usual approach to film composition where the music was composed for a specific film.

“I selected it because it’s one of John Williams’ great pieces that is not often heard,” Lamell said. “It doesn’t have the usual sort of standard Hollywood dazzle, like Star Wars or Raiders of the Lost Ark. This has a more sophisticated character and embodies a very advanced jazz style. It also reflects the fact that John Williams in his earlier years was a celebrated jazz pianist.”

The concert will conclude with selected movements from Tchaikovsky’s seasonal favorite, The Nutcracker. With the new Disney film version out in theaters just now, this is an example of a film that’s adapted music that came long before. Lamell has chosen some of the most popular movements and has added a number of his other personal favorites that are not usually heard in a purely orchestral setting.

“Although the entire Nutcracker is wonderful, Lamell said, “still it’s nice to zoom in on what I feel are the true highlights.”

Concert-goers will be treated to the musical splendor of the Chinese and Russian Dances, the love duet and the Waltz of the Flowers, among others.

All Santa Monica Symphony concerts are offered free of charge and no tickets are necessary. For more information, call (310) 395-6330 or visit www.smsymphony.org.

By smmirror November 29, 2018
in Life and Arts, News
Related Posts