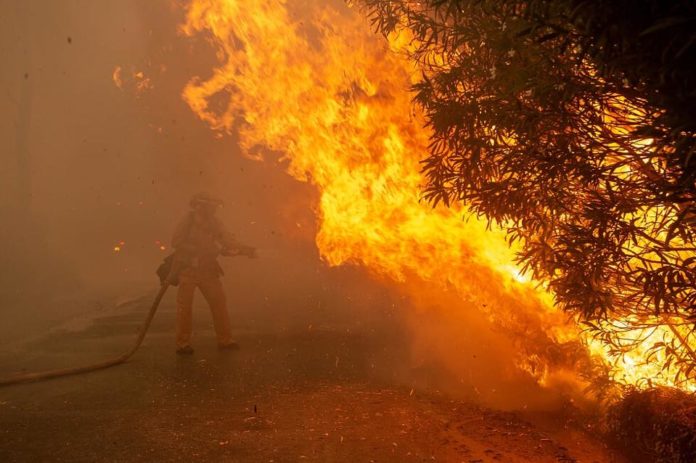 It is too early to capture all the valuable lessons of the November 8 Woolsey Fire, but it has a depressing familiarity. Before full containment on November 21, that fire destroyed 1643 structures and damaged 364 others, killed three, injured three firefighters and burned nearly 100,000 acres or about 20 times the area of Santa Monica. With regular frequency (1971, 1978, 1993, 2007, 2018) massive fires start somewhere along the Ventura Freeway north of Malibu and burn their way with unstoppable flame fronts south to the sea. With regular frequency, we see pictures of owners faced with life and death decisions to stay and fight, often with puny garden hoses, or flee with precious triaged belongings or terrified animals on gridlocked roads. Finally afterwords we always see the same “injustice” of owners returning to randomly burned out homes amid others that for no apparent reason, survive unscathed.

So why should Santa Monica care when Malibu goes up in smoke? There are the immediate short-term impacts on our City of traffic paralysis, terrible air quality and overload of all temporary evacuee reception facilities (hotels, Air BnB, churches, etc). Then there are the midterm impacts on Santa Monica of a ratcheting up of our already unaffordable housing costs as evacuees compete with our residents to find “permanent” housing while they rebuild or relocate. We also share a common School District, so damage to facilities or operation disruptions of the Malibu schools inevitably affects our entire district. Finally, there are the long-term effects of the increased cost of everyone’s fire insurance, increase in electrical rates as SCE struggles to pay damages since downed power lines often cause fires, and most significant to our residents are the anticipated runaway construction cost increases as scarce contractors and crews get sucked up in Malibu’s reconstruction. These long-term cost increases will trickle in slowly as insurance claims settle, lawsuits adjudicated and reconstruction plans designed, permitted and bid. But the explosive reconstruction costs increases affecting all the region’s building industry are as inevitable as the certainty that Malibu will burn again. In short, we are all directly affected by our northern neighbor’s fate.

So what have we learned from all this pain and loss?

First, the evacuation of Malibu, that has minimal exit routes, should become a ritualized science, Cal Trans, the Highway Patrol, the County Sheriff, and the Santa Monica and Los Angeles City Police Departments should update their evacuation plans from the lessons learned three weeks ago. After all, they only get to practice these kinds of full city evacuation drills once every thirteen years, so the lessons need to be captured and studied now. Evacuees were stuck on PCH for up to 4 hours. It shouldn’t take that long to drain a relatively small City of 13,000 residents. While three Santa Monica churches thankfully opened their doors to evacuees, all the Santa Monica and PCH and 10 Freeway exits were sealed so the evacuees couldn’t get there. Blocked westbound 10 Freeway drivers were making U-turns in the middle of the freeway and driving the wrong way up on ramps at 20th Street. Some Malibu gas stations couldn’t pump gas because the fire had already taken out their power lines. In other words, the traffic chaos was everywhere.

But there are solutions. For example with software like Waze, we can understand both in real time and afterward exactly why PCH gridlocked and make better decisions about when to switch to all four lanes going in one direction. We can also determine where to close and drain the westbound 10 Freeway, where and when to divide the evacuation either north or south on PCH, versus the need for faster full lane access for mutual aid firefighters arriving from all directions but mostly from the south. An effective evacuation plan with a central command center should be ready to go at all times and would be life-saving not just for fires but also for unlikely events such as Tsunamis, earthquakes, and “dirty” bombs.

Another lesson learned is that the Santa Monica Fire Department was not prepared to fully participate in mutual aid deployment of the needed strike teams. Several of our front line engines were in the shop for repair while four of our new apparatus were awaiting their full equipment configuration. As we found out, the Assistant Chief had not ordered the needed equipment promptly. We can certainly do better than that for both our own City’s protection but also to meet our Statewide mutual aid firefighting obligations.

At this time we do not know where all the evacuees went during and after the fire. While the number of evacuees quoted fluctuated widely up to 149,000 including Agoura, Westlake Village, etc., we do not have a clear picture of how many went to friends, relatives, hotels, Air BnB, churches, schools, or evacuation centers? This disaster points to a need for a real-time updating crisis map of designated or willing to participate evacuation centers. Its just a sister of the traffic evacuation map as designated centers fill up in real time, more need to be opened farther from the actual fire. Unfortunately at this time, the fire growth information, the road closure, and traffic status, and the evacuation center availability visible to a desperate fleeing evacuee is a dysfunctional mashup of rumors, the bulletins from the CHP, Cal Fire, County Fire, and even newspapers and social media. Just like people know to dial one number, 911, for an emergency, there should be ONE central real-time map whose name everyone knows showing in easy to understand graphics what is happening so evacuees can rely on it as they make their own decisions in the face of an overwhelming crisis.

Unfortunately, the impact of the Woolsey Fire will be with us for a long time. A year after the 400,000 acre Thomas fire only a third of the burned out property owners have even received their insurance settlements. But the lessons from such a fire are too valuable to ignore in our rush to get back to “normal.” To fail to prepare is to prepare to fail.