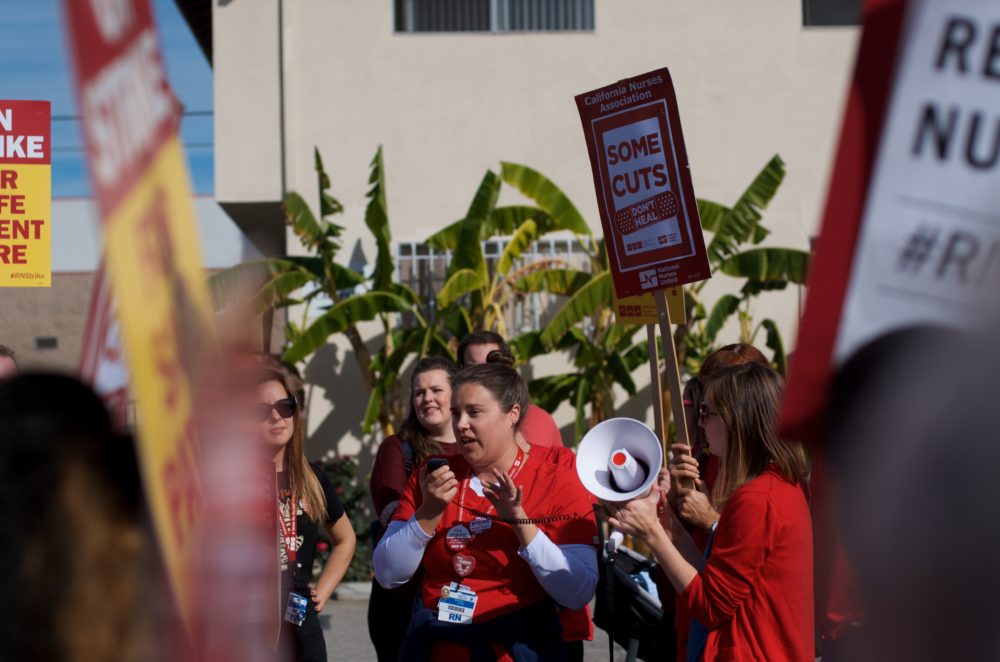 More than 300 nurses picket in front of Providence St. John’s.

“It is heartbreaking what is happening to our hospital,” a nurse said at the picket Tuesday morning.

Specifically, the nurses union, California Nurses Association, are protesting cuts Providence St. John’s has made to lift and transportation teams that carry patients throughout the hospital. Nurses say many patients hooked up to heavy equipment cannot be moved by one nurse alone.

“Our lift teams that help us safely lift patients have been eliminated, and our transportation teams have been drastically cut,” said Sudie, a resident nurse at St. John’s for 24 years.

Nurses are also protesting below market rate wages at the hospital, which they say are lower than other Westside hospitals like UCLA Medical Center and Kaiser Permanente.

Liz wade has been a nurse at Providence St. John’s for 20 years, told the Santa Monica Mirror that administrators at Saint John’s have told nurses that if they strike, they can not come back to work for five days.

“We have been having meetings and trying to come to an agreement at the so-called ‘bargaining table’ and they are just not wanting to budge at all. We warned them that we were going to strike and still nothing so we are striking for a day. They said ‘if you strike, we are going to lock you out for five days.’ This means we cannot come to work even if we are scheduled during the day, we cannot use out PTO [paid time off]. It’s a way of them punishing us,” Liz said. “We usually work three days a week here, [for] twelve-hour shifts. So let’s say a nurse was scheduled to work today, tomorrow and Thursday, she is losing a whole week of pay”

When asked to respond for comment, Providence St. John’s said characterizing this as a lock-out is inaccurate, saying it’s standard procedure that is part of the hospital’s contract with the employment agency.

“Nurses who chose to join the strike have been advised their positions may be filled for up to five days, under the terms of the hospital’s contract with an employment agency – standard procedure for this service. While we expect the union to call this a lock-out, as it has done in the past, that simply is not true. The five-day minimum service is a condition set by the employment agency, and the union is well aware,” Providence St. John’s said in a statement.

The hospital went on to say that while they respect the right for nurses to strike, they claim the nurse’s union has made little effort to negotiate a new contract and that the assertions about patient safety are unfounded.

“The hospital has been frustrated since negotiations began five months ago, as the union has made little effort to negotiate a new contract that provides fair wages and benefits for our nurses,” the Providence St. John’s said. “In recent weeks, the California Nurses Association has implied that patient safety has been jeopardized, and sought support from the public. But the truth is, Saint John’s recently underwent a routine yet very stringent survey by The Joint Commission, which found no safety concerns.”