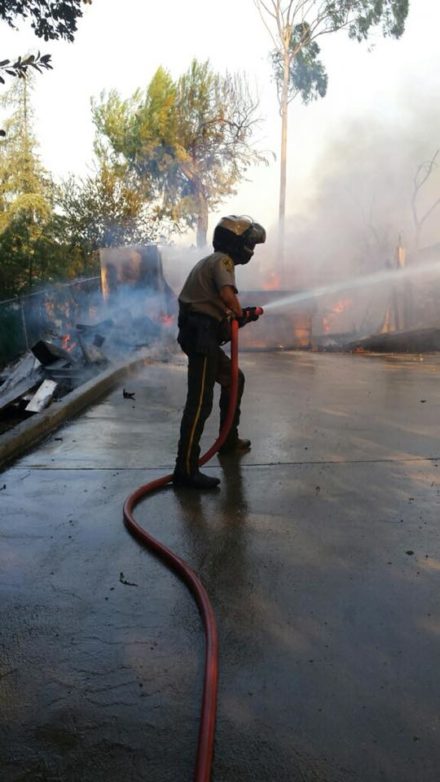 Over 70,000 acres destroyed as winds expected to pick up again tomorrow.

Two individuals have died due to the Woolsey Fire burning in Los Angeles and Ventura counties.

According to Los Angeles County sheriff’s Chief John Benedict, two people have been found dead in the fire zone of the Woolsey Fire, which at the time of publishing has burned over 70,000 acres, threatening over 3,500 structures and is currently at zero percent containment.

Sheriffs and police from Ventura and Los Angeles city and county are assisting in the effort, controlling traffic, making sure people within the evacuation zone are out of their homes and preventing looters.

There have been no fire warnings in Santa Monica but after the Los Angeles County Department of Public Health (LACDPH) issued a smoke advisory warning, Santa Monica officials canceled all community and cultural services activities due to smoke conditions.

“Due to smoke conditions, all community & cultural services activities have been cancelled for Saturday, Nov 10. Limit exposure, remain indoors with windows/doors closed or seek alternate shelter, avoid vigorous physical activity. There are no fire warnings for SM at this time,” the City wrote in a tweet Saturday afternoon.

In addition, people with heart or lung disease, including asthma, the elderly and children are urged by the LACDPH to take extra precaution in these conditions.

All Santa Monica on and off-ramps to the 10 Freeway are now open again and south and northbound traffic on the 10 resumes. The Pacific Coast Highway is open until Sunset Blvd. Where there is a hard closure.

While the City of Santa Monica has not opened up a public shelter yet, to accommodate anyone from out of Santa Monica, all enforcement of “Preferential Parking Zones” will be suspended until further notice. The closest shelter is at Palisades High School (15777 Bowdoin Street, LA 90272). In addition, Airbnb announced that the company has activated their host community to open their homes for $0 for those evacuating the Woolsey fire.

A red flag warning will be in place Saturday night throughout Sunday afternoon as dry, offshore Santa Ana winds are expected to pick back up again.