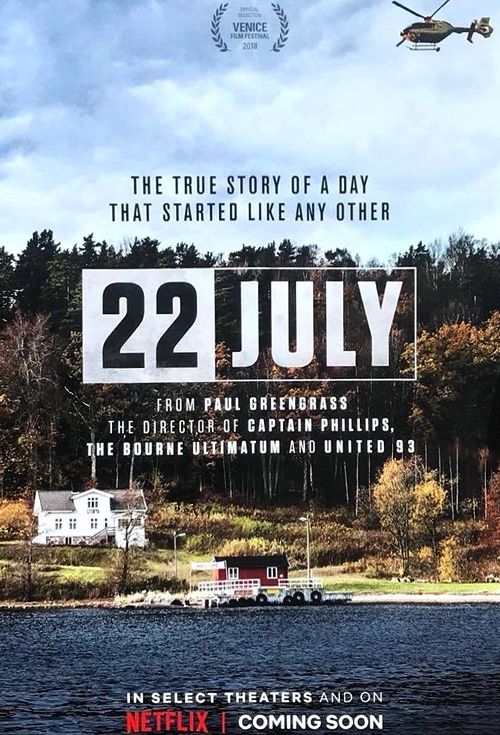 In light of the enormously significant election we just participated in, I would like to bring attention to a film that I believe everyone should see, Paul Greengrass’s “22 July”.

We are all weaker when the world becomes “us” vs “them.” It seems to be the style of some leaders that the words that they formulate will be embraced by their followers simply because they have spoken or written them, regardless of whether the content is valid. That the public will believe anything they hear or see is a tenet of the advertising business, and a lucrative one. However, the advertising community has in more recent years been held to a strict policy of “truth in advertising,” which is gladly enforced by the public. Why would we not hold our leaders to the same “truth in advertising?”

When did the world get to be “us” vs “them?” It is exactly the type of rhetoric mentioned above, denigrating one group in the eyes the other that inflames the followers of a leader into hatred of another class of people. It’s easy to blame your problems on a person or group of people you consider to be different. This movie is the study of just such an example.

“22 July” is a groundbreaking documentary-drama by celebrated director Paul Greengrass (Jason Bourne, The Bourne Ultimatum, United 93, Sunday Bloody Sunday). The film has had one of the widest releases in Netflix history. Greengrass started his career as a documentary journalist sent to global hot spots for the British series “World in Action.” His background serves him well here. He has put extensive research behind this drama of a real-life tragedy that happened in Norway in July 2011.  He has assembled a cast of wonderful actors who portrayed the real-life people caught up in the horrific events. The actors noted that Greengrass has a way of drawing a great performance from his players by making them comfortable in his trust.

Greengrass knows how to involve his audience in a piece of history as if we were part of the story. And, ironically we do have a role. The most important role is ours, and that is to comprehend what history is teaching us and act on it. Greengrass discussed how his parents had lived through the financial disaster of the 1930’s. The isolationism, nationalism, anger born of a worldwide financial crisis created a character in a downtrodden nation that screamed self-centeredness.

We all live on this planet together – we are not each other’s enemies. The quick and easy “way out,” to place blame for our problems on another group instead of searching for solutions. We need more than anything to develop a sense of humor about our lives, no matter how hard they are.