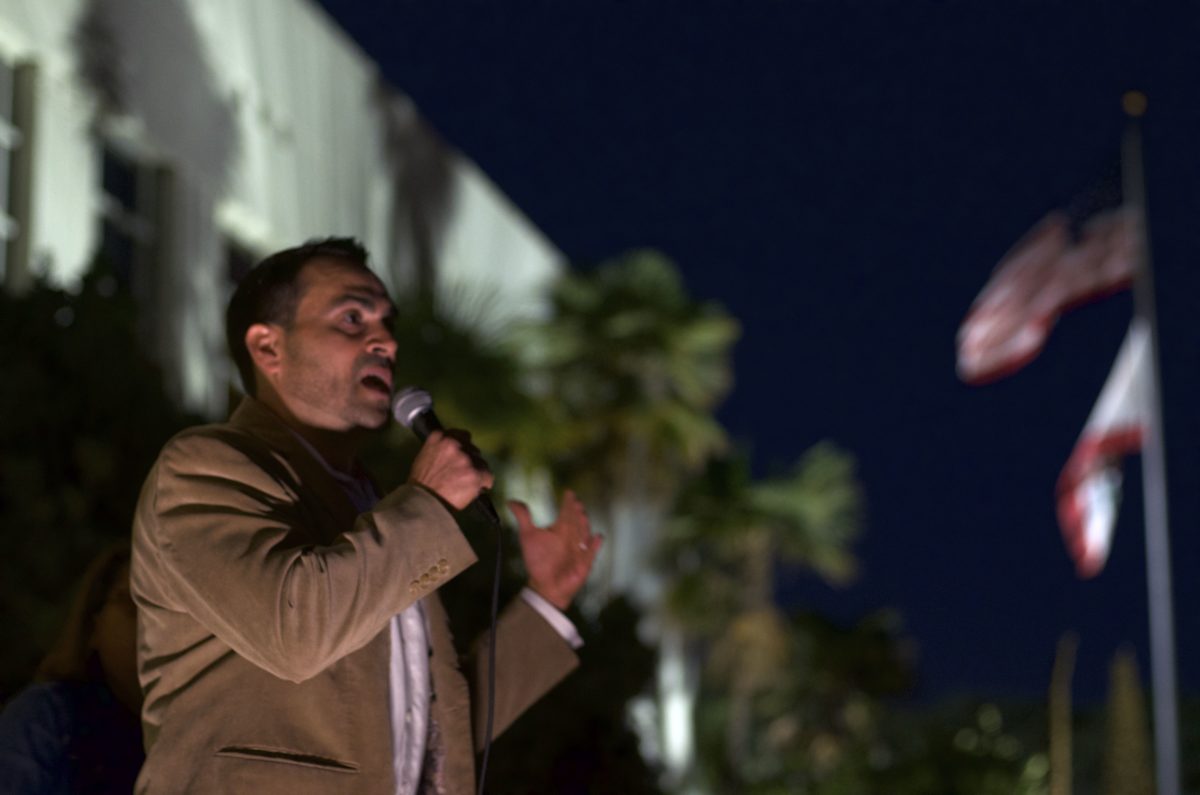 Tuesday evening outside Santa Monica City Council, plantiffs in the voting rights case versus the City of Santa Monica held a rally protesting the City’s decision to appeal a judge’s recent ruling that at-large elections in Santa Monica are in violation of the California Voting Rights Act.

“They found that they [the City] did this intentionally, that they intentionally created an election system that would prevent or obstruct or make it more difficult for candidates of color to get elected and so we are here and we are glad the judge sided with us but not even an hour later the Council announced that they were intending to file an appeal,” said plaintiff Maria Loya at the rally. “They don’t have any money for a lot of the things that residents are asking for, that residents need, but they sure do have money to protect their own positions and their own privilege.”

According to plaintiff attorney Kevin Shankman speaking at the rally outside City Hall, the City has spent $6 million to $8 million fighting this case. The City of Santa Monica is currently looking to verifying this claim and the article will be updated once more information becomes available.

The case, Pico Neighborhood Association et al. v. City of Santa Monica, pitted voting rights advocates against the City of Santa Monica. The plaintiffs, led by Loya, argue that the City’s at-large election system dilutes the minority vote in City Council elections and is in violation of the 2002 California Voting Rights Act, which was passed to increase opportunities for Latinos and other minorities to elect representatives of their choice.

“We are here because in 1947 the City Council adopted an at-large election system. And that at-large election system, what it did, was obstruct candidates of color from being elected. And that is why it is no surprise that there have been only two candidates of color elected in the history of the City of Santa Monica, one Latina and one African American, and that is not acceptable. That was done by design. And the Pico Neighborhood has suffered the consequences of that intentional rigging of the election system. For many years, we felt we were neglected and marginalized. We were ignored,” Loya said.

Oscar de la Torre, who along with Loya has been one of the leaders in the case, said at the rally that district elections will lead to more voice for often underrepresented groups in the City. In his speech, de la Torre brought up all the instances the Pico Neighborhood residnets have been impacted by lack of representation on City Council, from the construction of the 10 Freeway and the Expo Line to the response to gang shootings that occurred in the areas during the 1990s.

“We know with district elections we are going to elevate the voice of the residents and decrease the voice of the developers. We know that we will have a government that will truly represent us at the neighborhood level. In your neighborhood, you will have someone that represents you that has to live in your community, that has to live in your neighborhood. That’s somebody who’s accessible, somebody who you can run into in the supermarket and talk to about the issues,” de la Torre said.

The City, however, contends that Latinos do enjoy success in City Council elections, pointing to Latino Councilmember Tony Vazquez, who is one out of seven councilmembers. During the trial, defense lawyers argued that this makes City Council 14.3 percent Latino, greater than the 13.1 percent of the City’s 89,736 residents who are Hispanic or Latino. Defense attorneys also point to Mayor Pro-Tempore Gleam Davis, who testified during the trial that her adopted parents told her that her biological father is from Mexico.

Santa Monica Mayor Ted Winterer, responding to members of the public who commented on the trial prior to the start of Tuesday’s City Council meeting, said that the City is appealing the decision to maintain unity in Santa Monica.

“For decades, our at-large system has led to a unified vision for the City. We have made great strides towards housing opportunities for all incomes, cutting-edge sustainability policies to preserve and protect our natural resources, support for public education, fiscal sustainability and preservation of neighborhoods,” Winterer said. “Our at-large system was adopted by the voters, and has been reaffirmed by voters not once, but twice. We fear that the shift to district-elections would put neighborhoods versus neighborhoods in a bid for resources, divide renters and homeowners, the rich and the poor. The result could lead to a contentious Balkanisation of government which currently works for the good of all. We continue to believe this is the election system that best serves all the voters of Santa Monica.”

During the public comment period, Armen Melkonians, founder of the Facebook group Residocracy Santa Monica, told City Council that if the City proceeds with an appeal, he would organize a recall election for the sitting Councilmembers. Melkonians cited Article 2, Section 16 of the California Constitution, which states that a recall election may be conducted within 180 days from the date of certification of sufficient signatures. For a city the size of Santa Monica, signatures from 15 percent of registered voters would be required.

“I am getting calls from our membership, which is at 3,200 now, to run a recall campaign for all seven Councilmembers,” Melkonians said. “I can tell you right now that I guarantee you one thing we can do is gather signatures. We have a history of it and I know that we can do it. And if this Council decides to spend more of our taxpayer money, when this Council has sent emails to residents saying there is not enough money to put police in our parks where there are drug dealers and if you spend that money on an appeal, I guarantee we will get the signatures for at least six of the seven recalls.”

Both sides will appear in court December 7 for a post-trial hearing to decide the appropriate solution for violating the CVRA.