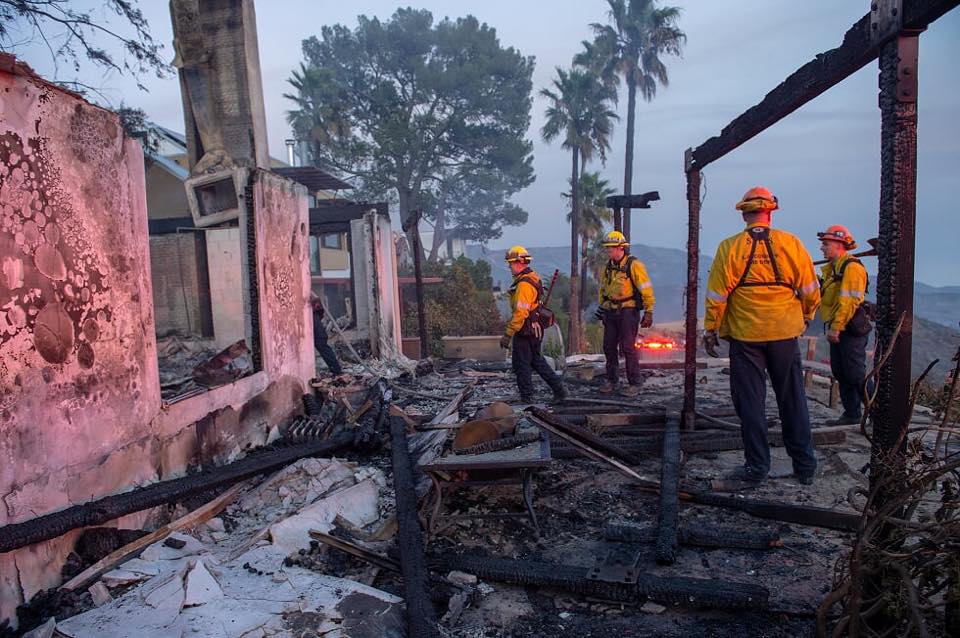 47 percent containment as parts of Los Angeles and Ventura counties still in danger.

Over a devastating week of destruction, the Woolsey Fire has burned through nearly 100,000 acres of the Santa Monica Mountains in Los Angeles and Ventura counties destroying at least 483 structures. As of the time of publishing, firefighters continue to combat the blaze, which as of Wednesday afternoon, the fire was at 47 percent containment.

The fire, which has caused the fatalities of two people and injured three firefighters, forced mandatory evacuation orders in the cities of Malibu, Topanga, Calabasas, Agoura Hills, Westlake Village and Hidden Hills. As of Wednesday afternoon, portions of Calabasas, Malibu and Thousands Oaks have been repopulated. Areas in Malibu that have been repopulated include the Pacific Coast Highway from Carbon Canyon Road to Webb Way and the neighborhoods of Serra Retreat and Sweet Water Mesa. The Malibu Colony and Civic Center remain closed.

In addition, the following areas in Malibu have begun repopulation as of 4 p.m. Wednesday.

At the time of publishing, the fire is threatening 57,000 structures. Officials are urging those displaced by the wildfire to not return until first responders declare the area safe and lift mandatory evacuation orders.

“It may look safe enough to go back and check on your home, but don’t do it,” said Los Angeles County Fire Chief Daryl L. Osby at a press conference. “The potential dangers you may encounter could cost you your life. We will let you know when it’s safe to go home.”

Although it may appear that fire threats have passed in some other areas of Los Angeles and Ventura counties, officials cautioned that conditions remain unstable and can shift suddenly dangerously with changes in wind patterns and other unpredictabilities. Dangers within the impacted area include live embers, landslides, unhealthy air quality and downed live power lines.

Over the past week, red flag conditions fueled by strong Santa Ana winds and single digit humidity made combatting the blaze a challenge for firefighters. Wednesday, however, onshore winds have allowed crews to minimize perimeter growth and partially quell the fire.

According to CAL FIRE, firefighters are expected to contain the Woolsey Fire by Saturday, November 18.

Smoke from the fire continues to be pushed into coastal areas of the Los Angeles and Ventura counties by the winds, creating unhealthy air conditions for residents.

Over Thanksgiving week, there is a chance of rain, which may offer a reprieve from the hot and dry conditions, but also brings along the chance of mudslides due to unstable ground post-fire.

Follow the SMFD on Twitter @SMFD for the most up to date information. For the latest information on road closures and fires, please monitor https://www.chp.ca.gov/home/california-wild-fire-resources.