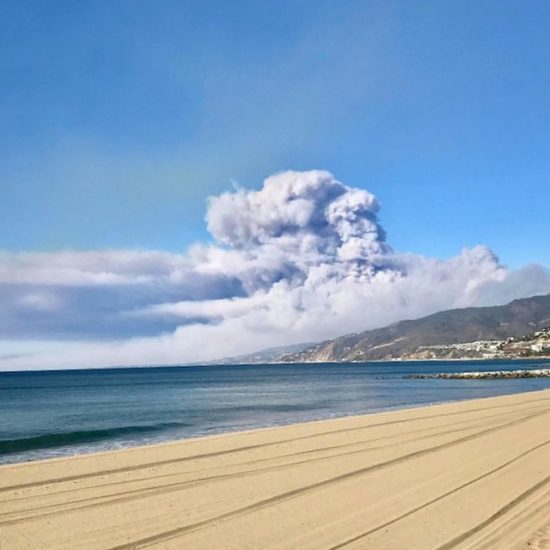 As the Woolsey Fire burns through 10,000 acres of Ventura and Los Angeles counties, forcing evacuations in around 75,000 homes in Malibu, Calabasas and Thousand Oaks, the Los Angeles Fire Department (LAFD) warns that the Pacific Palisades, adjacent to Santa Monica, may be forced to evacuate at some point.

“Malibu is being evacuated right now and that may end up trickling into the Pacific Palisades in some point in time,” said LAFD Captain Dusty Clark.

The fire has burned over 14,000 acres and is currently 0 percent contained.

While the City says that “there are no warnings for Santa Monica at this time” LAFD’s Captain Clark told the Mirror that Westsiders should be aware of their surroundings and keep an eye out for small fires that could spread rapidly in Santa Ana conditions.

“Maintaining access through your community is imperative right now,” Captin Clark said. “This means keeping fire hydrant access clear, everybody should have a more heightened sense of awareness, staying vigilant, keeping an eye out for the potential for small fires that could end up having a rapid spread of growth and maintain your situational awareness with the media and staying up to date with any evacuations taking place.”

According to Captain Clark, while Bell Canyon and Malibu are the two closest areas to Santa Monica currently under education, the Pacific Palisades may be forced to evacuate at some point in the future.

This closure will allow emergency personnel to use all four lanes of the PCH southbound from Malibu Canyon Road. to the 10 Freeway in Santa Monica for vehicular evacuees, to assist with immediate evacuations in the Malibu and the surrounding areas.

The National Weather Service has issued a red-flag fire warning that will remain in effect through Friday night. Follow the SMFD on Twitter @santamonicafd for the most up to date information. Sign up for emergency alerts in Santa Monica at https://www.smgov.net/Departments/OEM/Stay_Informed.aspx. For the latest information on road closures and fires, please monitor https://www.chp.ca.gov/home/california-wild-fire-resources.