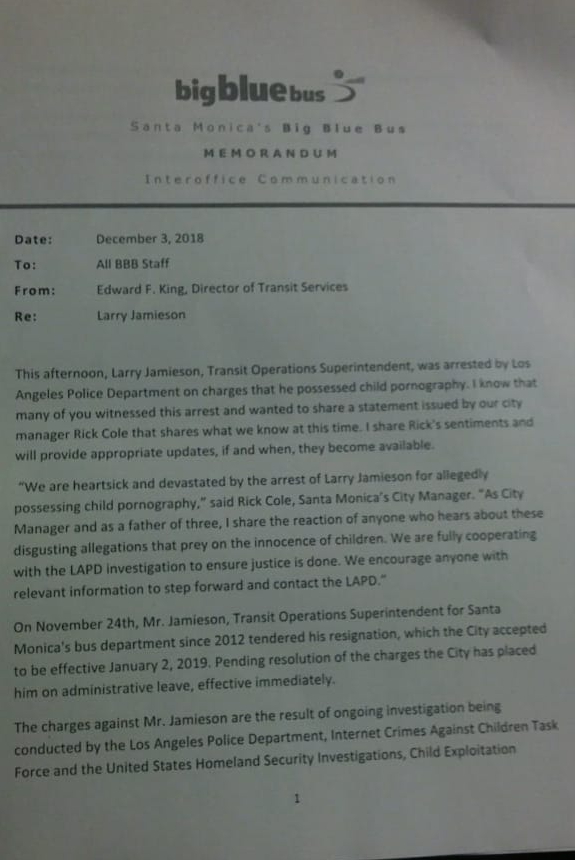 A City of Santa Monica Transit Operations employee has been arrested on charges of possessing child pornography.

According to a Big Blue Bus Interoffice Communication posted on the Facebook group Residocracy Santa Monica, Transit Operations Superintendent Larry Jamieson was arrested on December 3 by the Los Angeles Police Department on charges that he possessed child pornography.

The memo, written by Director of Transit Services Edward F. King, states that on November 24, Jamieson, who has served as superintendent since 2012, tendered his resignation, which the City accepted to be effective January 2, 2019. Pending the resolution of the charges, the City has placed Jamieson on administrative leave, effective immediately.

“We are heartsick and devastated by the arrest of Larry Jamieson for allegedly possessing child pornography,” said City of Santa Monica Manager Rick Cole in the memo. “As City Manager and as a father of three, I share the reaction of anyone who hears about these disgusting allegations that prey on the innocence of children. We are fully cooperating with the LAPD investigation to ensure justice is done. We encourage anyone with relevant information to step forward and contact the LAPD.”

The charges against Jamieson are part of an ongoing investigation being conducted jointly between the LAPD, Internet Crimes Against Children Task Force and the United States Homeland Security, Child Exploitation.

Since the memo did not come directly from the City of Santa Monica, the Mirror has reached out to the City asking for confirmation. This article will be updated once a response is received.