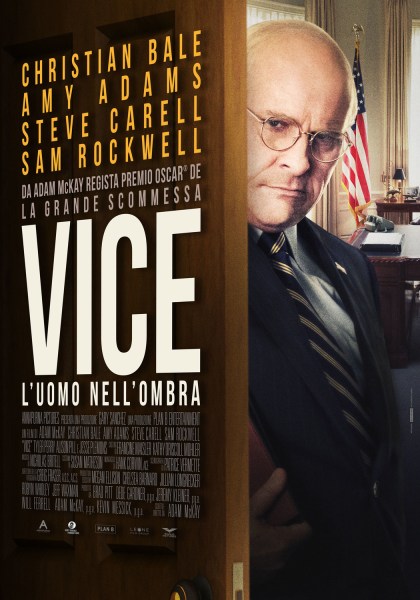 Adam McKay’s gripping political “dramedy” “The Big Short”, won the 2016 Oscar for Best Writing Adapted Screenplay in and was nominated for several other categories.  His latest film, “Vice,” is an in-depth study of Dick Cheney, the Vice President of George W. Bush’s administration. It’s a thought provoking, disturbing study of Cheney’s remarkable rise to become arguably the most powerful person in the world at the time. Cheney was known to be the mastermind behind Bush’s major decisions and author of the tenets of the Bush Administration.

This film does not build suspense with the same mounting tempo as did The Big Short.  “Vice” does dig deep into the psychology and development of the outwardly unassuming Cheney, a lower than average student from Wyoming with a tendency to drink too much and get into bar brawls, who ultimately rose far beyond expectations. During his Vice Presidency, Cheney set up a far-reaching row of political dominoes that they are still falling today.

“Vice” contains flashes of McKay’s extraordinary grasp of humor. The ensemble of actors he has brought to this film provide astounding performances. Christian Bale has transformed himself so completely into Dick Cheney that I could have believed the real Cheney was playing himself. Amy Adams is unrecognizable, losing her own identity in Lynne Cheney. Steve Carell makes a picture perfect Donald Rumsfeld. Alison Pill, Sam Rockwell and Tyler Perry are also at the top of their game as Mary Cheney, George W. Bush and Colin Powell. Kate Briscoe and her team of make-up artists have done an outstanding job in these transformations.

The film should be seen as a critical lesson in how our country’s politics in the George W. Bush-era manifested into today’s divisive conditions.

The heavy beat of the movie underscores Cheney’s slow, relentless rise to power, the building blocks to the Middle East situation that he put into place, and the nascence of Fox News as a political player. “Vice” begins with a warning to heed “The Quiet Man” as the figure plotting in the shadows to form the machinations of a climb to ultimate power.

If you want pasta but are cutting down on carbohydrates, Spaghetti Squash might be the perfect solution to achieve your...