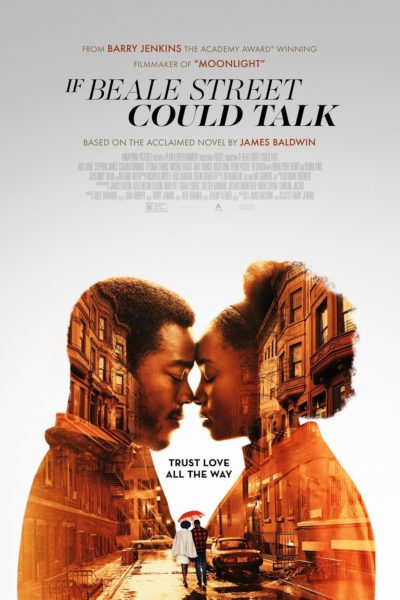 The opening sequence of “If Beale Street Could Talk” is exquisite and sets the tone for the entire movie. The story, although punctuated with tragedy, is built on a love that is strong enough to overcome cruel hardship. The lead actors who carry the film, Kiki Layne and Stephan James, are relatively inexperienced. This is Layne’s first feature film. James was memorable as legendary athlete Jesse Owens in the 2016 film Race. The entire ensemble of creates characters with depth and charisma – the members of a black family in New York City in the 1970’s.

Barry Jenkins wrote and directed this film. He had written the screenplay adaptation for his previous film, the Oscar-winning Moonlight, in ten days. Feeling that he was on a roll, he decided to write an adaptation of the James Baldwin novel, “If Beale Street Could Talk.” At the time, he had no access to the rights for the story, so the project was simply an exercise for him, although this adaptation took him five weeks to complete. The resounding success of Moonlight allowed Jenkins to acquire the rights to film the Baldwin story.

Forty years ago, James Baldwin himself had ideas of turning that story into a film and had written copious notes and even started writing the screenplay. Prior to the beginning of production, Jenkins received a surprise package containing Baldwin’s notes, from the executor of his estate. Jenkins says that the notes show that he and Baldwin were in agreement about the style of the film.

This film has a better confluence of style than “Moonlight.” It has the same slow pace and the camera plays beautifully on the characters’ faces. The rhythm moves like a gently flowing river. Nicolas Britell, who scored “Moonlight,” has matched the lush and romantic visuals with a synergetic score. As you watch this film will intimately comprehend the hopes, dreams and disappointments of this courageous family as they push for respect and dignity amidst the prejudice and injustice that underscore their existence.