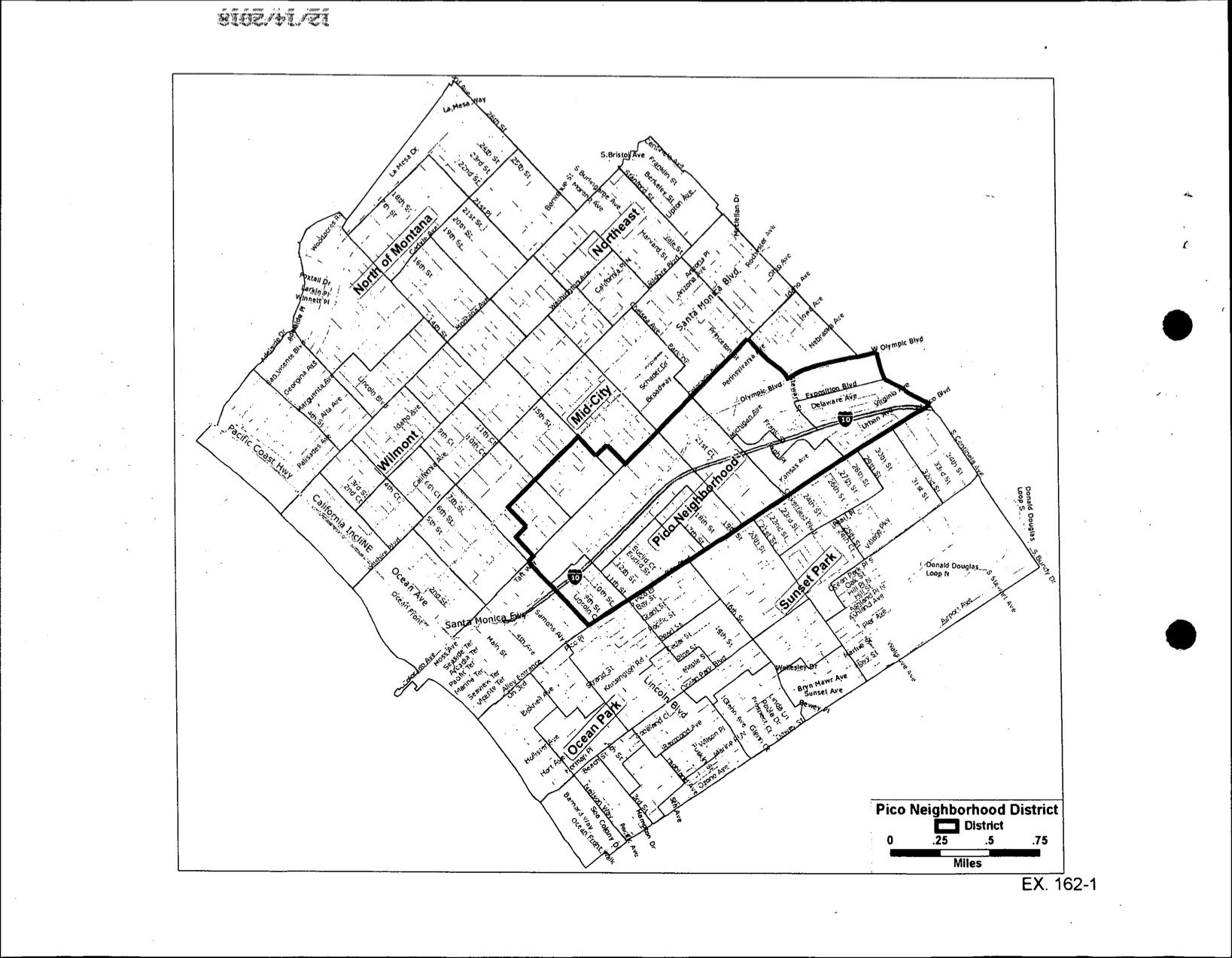 Los Angeles County Superior Court Judge Yvette M. Palazuelos has issued a tentative decision in the voting rights case against the City of Santa Monica ordering the future elections in the City be district-based.

“The Court commands and orders that from the date of entry of this judgment, Defendant’s elections for, and any seats on, the City Council be district-based elections, as defined by the California Voting Rights Act, and in accordance with the map attached,” Judge Palazuelos wrote. (See map above).

The map included with the decision only includes boundaries for a Pico-Neighborhood district. After public hearings and community input, the City will draw boundaries for the other districts.

The case, filed by plaintiffs Pico Neighborhood Association, Maria Loya and Advocates for Malibu Public Schools alleges that Santa Monica’s at-large election system dilutes Latino/a voting power in violation of the California Voting Rights Act (CVRA) and discriminates against Latino/a voters in violation of the Equal Protection Clause of the California Constitution. On November 5, Judge Palazuelos issued a decision siding with the plaintiffs.

After Judge Palazuelos’ initial ruling, an attorney representing the defendants said that after the final decision, the City was planning on appealing. Following Judge Palazuelos’ tentative decision this week, Santa Monica City Attorney Lane Dilig released a statement saying that the City was “pleased” with the tentative ruling and did not make mention of an appeal.

“We are pleased that the court appears to have affirmed that any district-based system imposed in Santa Monica will be drawn with a Pico Neighborhood district as set forth by the court but with public hearings and a full opportunity for community input with respect to other districts,” Dilig said.

Dilig did, however, state the City continues to believe their election system is fair and inclusive.

“The City continues to believe that the evidence at trial showed that its electoral system is fair and inclusive. Latino representation on the Santa Monica City Council exceeds the citizen voting age population in our community and Latino-preferred candidates have been elected to the Santa Monica City Council over seventy percent of the time under the current electoral system,” Dilig said.

In the press release Dilig’s statement was sent with, the City did not make mention of an appeal either, but did hint at the prospect of one.

“The City still hopes to convince the court to change its tentative decision and rule in the City’s favor, as plaintiffs’ claims lack merit and the evidence at trial demonstrates that Santa Monica’s at-large election system for City Council members is fair and inclusive and does not dilute Latino/a voting power,” the City wrote.

The Santa Monica Mirror has reached out to the City asking whether or not an appeal is still planned but at the time of publishing have not received a response.