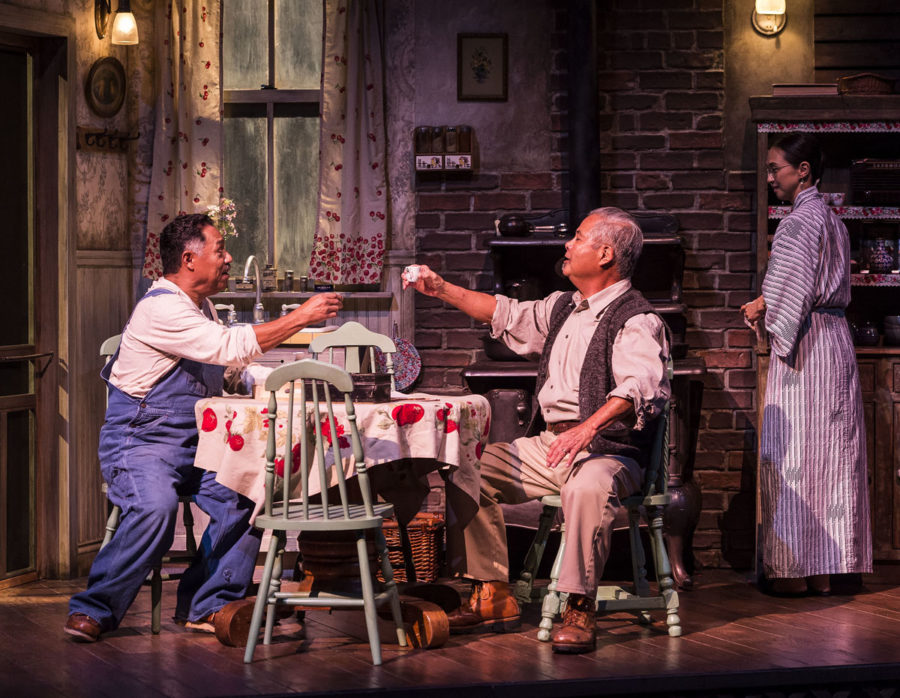 There is no doubt that multi-award winning playwright Luis Valdez is a brilliant playwright, earning his stripes with his innovative “Zoot Suit,” which premiered in 1978 at the Mark Taper Forum and subsequently made history by becoming the first Chicano musical to hit Broadway. His newest play, “Valley of the Heart” was greatly anticipated, but alas the production does not live up to the brilliance of his iconic “Zoot Suit,” which is not the fault of the script.

Let’s start with the script, which is very well written and begins in 1945. It tells the story of two immigrant families – the Yamaguchis, a Japanese-American family who own a farm in California’s Santa Clara Valley known today as Silicon Valley. They share the land with the Montaños, a Mexican-American family who are sharecroppers living in a small, quite rural farmhouse adjacent to the Yamaguchis. Both families are friendly with each other and are determined to give their American-born children a slice of the American dream. Unbeknownst to the respective parents, the first generation Americans from each family are secretly in love with each other.

In view of the White House’s draconian action against immigrants, this eerily timely story is told through the prism of World War II when Japanese citizens were ripped from their homes and put into detention facilities, which were ill-equipped concentration camps. Their crime? Being Japanese. And for that, they were considered the enemy of the United States of America who was at war with Japan following the sneak attack on Pearl Harbor. So far. So good. The script captures the painful words and action this Japanese family endured as they prepare to leave for the Heart Mountain Relocation Camp in Wyoming with just whatever they could carry. Their Mexican neighbors give them moral support, assuring them that they would take care of the farm until their Japanese friends were returned home.

In addition to a beautifully crafted script, the production values are outstanding, beginning with David Murakami’s projection design taking you into the surrounding vistas such as shots of crops and the pastoral country setting. Each of the family’s homes are well designed by scenic designer John Iacovelli, who makes maximum use of the space, with Pablo Santiago’s lighting design and Philip G. Allen’s sound beautifully enhancing the action at hand. So, we have an outstanding script and outstanding production values. Sadly, what we don’t have is an ensemble of skilled actors who could delve deeply into playwright/director’s Valdez’s characters and deliver polished professional performances. However, there is one excellent performance given by Lakin Valdez who as Benjamin Montaño is also the narrator of the story. He is in love with Thelma Yamaguchi, poorly played by Melanie Arii Mah, who gave what amounted to line readings. The actress never delved below the surface to reach the subtext of her character’s lines and mostly indicated* her emotional moments. The story takes us through the interment, Benjamin and Thelma’s marriage and the birth of their child, Benjamin’s determination to get reunited with his Japanese family, the homecoming, a few musical and pantomime numbers that seemed dropped in for effect and so it goes until the end. All this said, I have the utmost respect and admiration for Mr. Valdez and look forward to whatever project he has on his backburner

Other members of the cast gave performances ranging from rank amateur to possibly college level with some of the dialogue not even understandable. They include,) Moises Castro (Ernesto “Tito” Montaño,) Justin Chien (Joe “Yoshi” Yamaguchi,) Randall Nakano (Ichiro Yamaguchi,) Joy Osmanski, (Hana Yamaguchi,) Rose Portillo(Paula Montaño,) Daniel Valdez (Cayetano Montaño,) Christy Sandoval (Maruca Montaño,) and Scott Keiji Takeda (Calvin Sakamoto). I would be remiss if I didn’t mention Mariela Arteaga and Michael Naydoe Pinedo, the mysterious figures draped in black from head to toe. They portrayed Kurogos, stagehands in traditional Japanese theatre who incorporate Kubuki-style movements. They moved on cat feet and gracefully aided in prop and set changes, as well as standing at attention as formidable guards looming in the background.

The big take-away is a reminder that the internment of the Japanese people is one of the blackest marks in American history and one we thought we would never witness again. Alas, a similar black mark is unfolding right before our eyes as we see immigrant families torn apart and most recently mothers and small children being tear gassed as they attempt to cross the border. Valdez’s play sharply illuminates the agony inflicted upon innocent people when a government unilaterally decides that a race of people is a danger to the nation’s security.

*”Indicating” is an acting term meaning when an actor fakes an emotion instead of having it emanate from a truthful place.