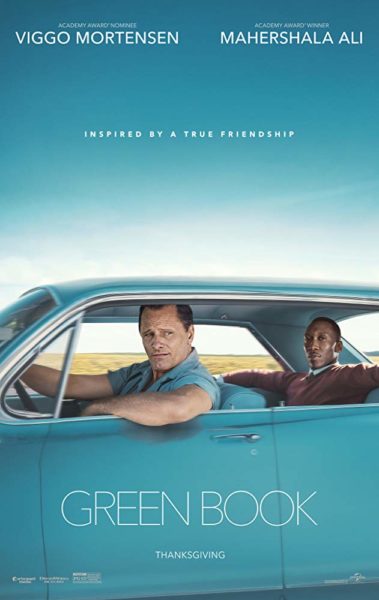 The “Green Book” of this film’s title has a substantial significance in our country’s history. It was a published record of the limited list of establishments at which African Americans were welcome to eat and sleep in the American South at the time.

The film is based on the true story of an unlikely friendship between two colorful, spirited and indomitable men from drastically different cultural backgrounds, who embark on a highly unusual road trip in the early 1960’s. By the end of their journey they find that they are, beneath the trappings and presentation of their lives, very similar human beings. This story is impactful and riveting, and beautifully crafted for the screen.

Music is the common language here – and music takes on a role of its own on this journey. A highly educated African American piano prodigy, Don Shirley, who had earned five doctorates and was fluent in several languages, arranged a driving tour through the Deep South with two members of his classical jazz trio. He recruited an Italian American bouncer from New York City, known as Tony Lip, whose education had ended at the 6th grade level, to be his personal driver and bodyguard.

The two became friends for the rest of their lives. This is their story.

Director Peter Farrelly became intrigued with this story that his friend, actor/writer Brian Hayes Currie was working on. Eventually, at Farrelly’s request, they both began writing the screenplay. Farrelly recruited two of the best actors working today for his lead roles, Mahershala Ali (“Moonlight”) and Viggo Mortensen.

Ali had concerns about playing a prodigy pianist, as he did not play piano at all. He undertook rigorous training on the instrument for months, and the result is that Ali appears to be a virtuoso on screen. It is no doubt significant that he was a successful rapper before his career as an actor took off, so he possesses the innate rhythm of a skilled musician.

Mortensen was worried that as a non-Italian, he would not be able to inhabit the role of Tony Lip. Mortensen completely gives himself over to the character, so much so that his own identity becomes unrecognizable. Both actors grew up in environments that embraced a variety of religions, cultures and customs, so their eyes are wide open when it comes to a deep understanding of universal human traits.

There was no reason that Don Shirley had to risk the dangers of a road trip through the South in mid 20th century. He said that he chose to take that risk because “it takes courage to change people’s hearts.” We all need to seek out that kind of courage in ourselves today. “Green Book” is a movie you should not miss, one of the finest and most important movies of 2018. The collaboration of Farrelly, Ali and Mortensen are what make this movie more than a weighty treatise. The film has a spirit and a sense of magic that are rarely achieved in cinema.