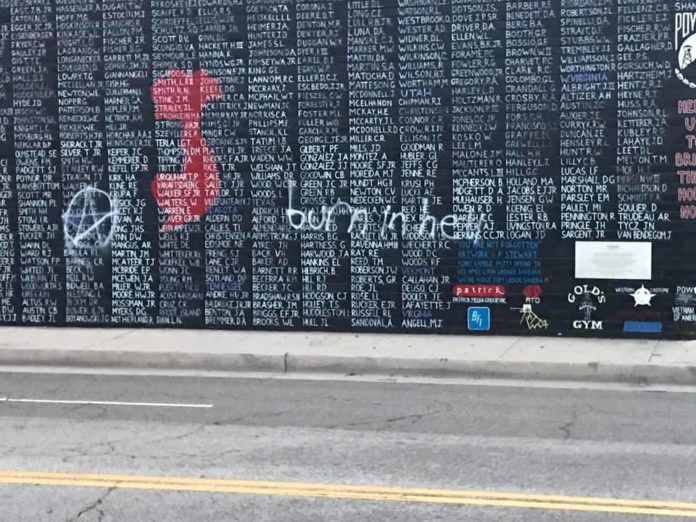 POW memorial wall in Venice defaced for the third time.

A Vietnam War memorial wall on Pacific Avenue in Venice has been vandalized with hate speech.

The graffiti depicts a star within a circle, in addition to the words “burn in hell.” This is the third time since 2016 that this mural, which honors those soldiers who were Prisoners of War or Missing in Action during the Vietnam War, has been tagged with graffiti. The content of this latest incident appears to be more hateful than the previous two incidents.

In May 2016 the wall was defaced by Angel Castro, a 24-year-old graffiti tagger known as “Liter,” whose name was spray-painted in large letters on the wall. Castro was sentenced to four years in state prison after pleading no contest to vandalism and robbery and ordered to pay $38,000 restitution.

In March 2017, the wall was again marred in thin, hastily written letters, by what appears to have been gang members.

The nonprofit Social and Public Art Resource Center, which is based in Venice, led the previous restoration efforts has been contacted for more information regarding the extent of the damage. Los Angeles City Councilmember Mike Bonin and the Los Angeles Police Department (LAPD) Pacific Division have also been contacted.

The LAPD responded saying they are aware of the incident and are investigating the crime.

“This is a despicable act of vandalism and my office is making sure the hateful tags are removed immediately. Thanks to the work of SPARC and the Venice Chamber of Commerce, we used a special protective coat of paint that allows graffiti to be removed easily when we restored the POW mural recently. The graffiti removal will be happening this morning and we will be working the LAPD and neighbor to identify and hold accountable the perpetrators of this offensive and infuriating vandalism.”

Editors note: a previous version of this article incorrectly stated that the star within the circle was a Satanic sigil.