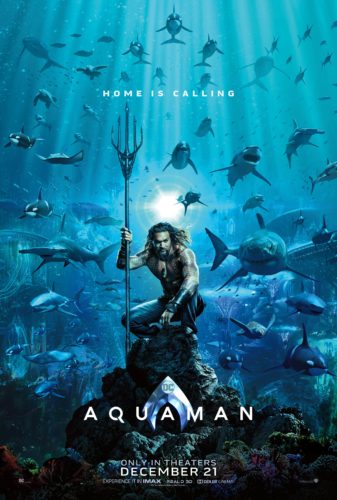 The character of Aquaman debuted in November 1941 in More Fun Comics #73. Over the years the sea-dwelling superhero has seen many different sides of his nature evolve. The current movie, James Wan’s “Aquaman”, is certainly a spectacle. His Aquaman is named Arthur and his storyline is unapologetically based on the legend of King Arthur.

The movie has its imperfections, one being that the first few minutes seem like a practice run compared to the later parts of the film. I wish the Wan had decided to re-shoot some of the opening scenes, after they had done the superb undersea work towards the end.

The sets and the world under the sea are awe-inspiring. Director Wan and cinematographer Don Burgess capture the flowing vastness of the ocean. The writers manage to incorporate the urgency of our impending destruction of our own planet through our misuse of its oceans. Witness our lackadaisical attitude towards the trash we create, our gluttony for water, and our procrastination in dealing with the effects of human pollution.

Much of this film is beautifully conceived, so the failures to achieve realism are jarring. The costumes look cheap and plastic, with a handful of exceptions. This could be due to materials, lighting or both. Amber Heard looks uncomfortable in hers in the beginning, though she seems to get used to it as the film goes on. The color of Amber Heard’s hair is a jarring red. I understand this is based on a comic. However live-action film is a different medium, which incorporates nature. Even the great Nicole Kidman cannot bring a grace and ease to her costume early on, though she does an amazing job with her role of Atlanna.

There is some welcome humor, most of it emanating from Jason Momoa’s self-effacing and reluctant hero, Aquaman.  I would like to have seen more.  Momoa is a highly intelligent and complex actor who puts extensive research into his roles. He has his own production company, Pride of Gypsies, for which he wrote and directed the feature Road to Paloma. Momoa had already played Aquaman in Batman v Superman: Dawn of Justice and Justice League.

The music works – background score by composer Rupert Gregson-Williams and familiar songs inserted by the music designers. Battle scenes are too reminiscent of other comic book franchises and Star Wars, and they go on way too long. Ditto for the imaginary Sea Monsters that look like every other comic book beast– they are not needed, as the grandeur of the ocean and its natural creatures is enough of a marvel in itself.

When I was four years old my parents bought me a long roll of foot-wide blank newsprint to draw on to stop me from drawing on the walls. The roll seemed endless and I immediately set to work drawing a story of a boy and girl who go on a daring adventure under the sea. This was my dream, so excuse me if I expect perfection of Aquaman – it’s the world that existed in my imagination. I did really enjoy the movie. It’s well worth seeing on the big screen, and now I’m looking forward to a more perfect sequel.