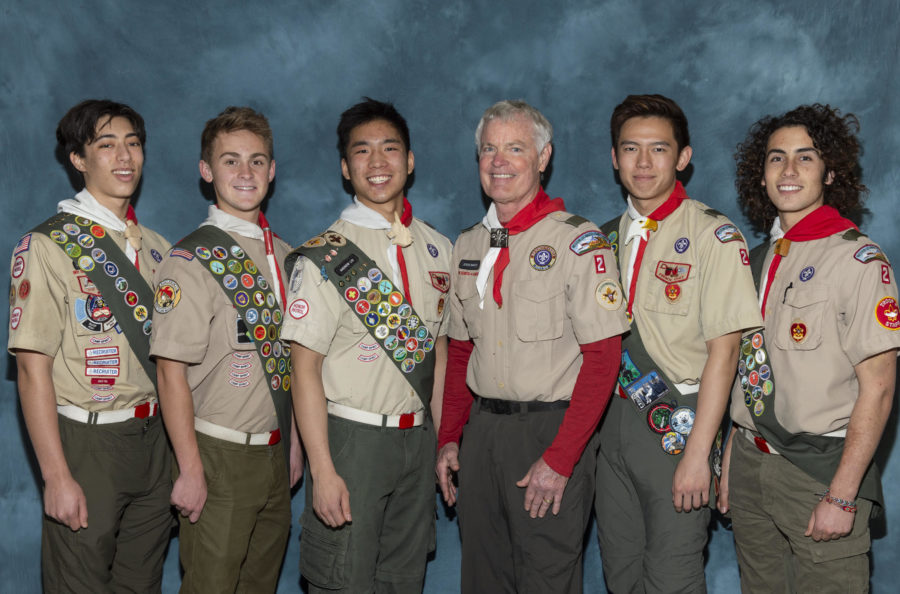 On January 27, 2019, five Santa Monica teenagers will be awarded the highest rank one can earn in the Boy Scouts of America. Riley Connor Furlong, Ryan Chia-En Lai, Andrew Liu, Gabriel Kline Ramirez and Donovan Makoa Sanders will be honored with the rank of Eagle Scout at the Troop 2 Eagle Court of Honor to be held at the LDS Stake Center in Los Angeles, California. All five Eagle candidates are Seniors at Santa Monica High School – Class of 2019.

The Eagle rank honors exemplary effort, leadership and service. Only six percent of Boy Scouts achieve the rank of Eagle. In addition to demonstrating proficiency in first aid, citizenship, camping, swimming, emergency preparedness, and many other skills, Eagle candidates must coordinate and complete a community service project that demonstrates significant leadership abilities. Each of the Scouts being honored led a major project to improve quality of life in the community.

For his Eagle Project, Furlong built and painted a sandbox table for the University Parents Nursery School, and refurbished benches around the playground. Furlong and his team built pieces for the sandbox table with the help of staff the night before the project. The table was then assembled and painted on site. There were many benches that were splintering and were a potential safety hazard. Furlong’s project taught him about leadership, teamwork and how to plan and complete a project.

Lai’s Eagle Project benefited the Saint Monica’s Catholic School. Lai and his team trimmed a large vine while replacing bushes with plants that didn’t require as much sunlight. The vine was blocking the sidewalk while the bushes were dying due to lack of sunlight. Now it is a beautiful mini garden that doesn’t cover the sidewalk and has thriving colorful plants.

Liu’s Eagle Project consisted of reorganizing and repainting a storage container at the Gabrielino/Tongva Sacred Springs. First, Liu and his team started by taking out the contents of the container and organizing it. They continued by scraping the old paint off. Next, they applied a layer of primer, then applied the finishing coat. Not only did Liu’s project beautify the land, but it will also serve as a “headquarters” for future landscaping/gardening projects.

Ramirez’s Eagle Project was to clean up and restore Gabrielino/Tongva Sacred Springs. The two-day project involved over 50 community members, including Troop 2 volunteers and Tongva, Maya, and Gabrielino natives. The goal was to make the entire area a more enjoyable and beautiful place for people to visit and learn about Native American culture. This project taught him how to organize and lead a large group of people as well as how to succeed despite unexpected obstacles.

For his Eagle Project, Sanders restored the children’s playground at Santa Monica First Presbyterian Church. Sanders’ plan was to restore the soil and vegetation, install new PVC piping into the ground, replace the old irrigation system with one that would drain effectively, and completely re-soil the playground. The bark that had been there for years was replaced with rich soil; wooden planks were removed so that kids could play carefree. The kindergarteners now have a playground that is both more beautiful and water free.

The troop’s scouts contributed several hundred hours to these community service projects. Established 71 years ago, Troop 2 is one of the oldest and largest Boy Scout troops in the Western United States.  Since then, Troop 2 has graduated 355 Eagle Scouts and traveled to scout camps and high adventure destinations throughout the United States. Troop 2 Scouts are known to have saved at least 64 lives.