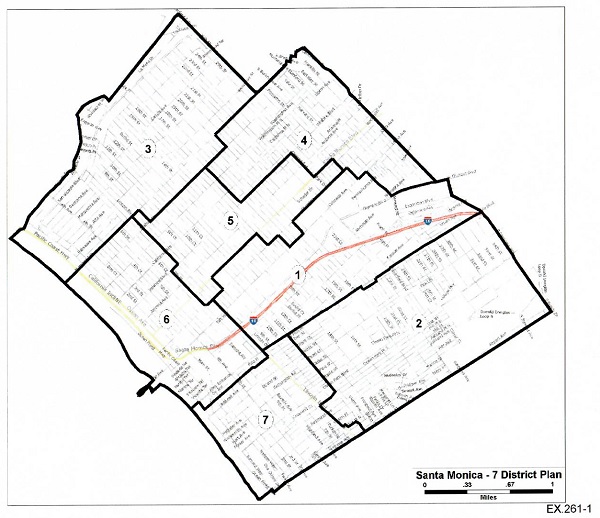 The case was tried, the decision is in, and the City lost. The judge has ordered that all future City Council elections be district based in accordance with a seven-district map submitted by the Plaintiffs.

Well, the city reiterated its intention to exhaust all appellate remedies to avoid having to give up the at large system found by the trial court to violate the California Voting Rights Act. It responded to the court’s invitation to submit its own draft map involving public process by stating it would undertake such a task only after all appellate rights have been exhausted. Meanwhile, based on that position, the voting rights violations the court found should continue on unchanged and unchallenged. No wonder the judge decided to make a specific order about elections and districts. I trust that she researched her authority to do so carefully before making it.

As a practical matter, this has been very costly litigation. In terms of dollars spent, estimates run from $6 to $12 million and the meter is still running. Plus, the City has now been labeled as a violator of voting rights. Ouch!

The initial decision to fight the suit may have been made in good faith, but the decision to continue the litigation should be evaluated. It is unlikely, however, that those who fought term limits (overwhelmingly favored by the electorate) are going to give up on something, which directly jeopardizes their chances of staying in power. Hence, the continuing challenge to the ruling coupled with the demand that even if they lose they still get to control the details of districting.

Why not come to the table now? Settle pending appeal. Better yet, settle before entry of judgment. Bring their gripes with the Plaintiff’s map to the table and/or propose a rapid public process to draw a new one both sides agree is acceptable Do the right thing.

Whether and how much public process is required if this case carries on is subject to legal interpretation and the subject of argument. That it will be time-consuming and result in further delay and cost is certain. Having faith in that process is difficult if it is going to be in the exclusive control of those who vehemently opposed district elections and scorched the earth trying to prevent them.

The court found violations and ordered a remedy. The City as of now intends to fight both. That is unfortunate for the Latinos in our community whose voting rights have been and continue to be violated and for the rest of us as well who support those rights.

I am a convert to the concept of district elections. I converted a few years ago for reasons other that those in the lawsuit. The two minute snippets of time grudgingly provided to members of the public to state their position is hardly meaningful in the face of a well prepared, directed and about to be if not already accepted by individual Council members staff report to the contrary. Resident voices were lost in a sea of development and lobbying and outside money interests when trying to get Council’s attention.

Districts aren’t independent city-states with autonomous control, so the Balkanization argument against them is ridiculous. All elected Council members will continue to work for the well being of the city as a whole. Including the Pico neighborhood, which really does seem to have been the dumping ground for things other neighborhoods were powerful enough to fight, we have far more common interests and issues than not. We are talking about districts having specific representatives responsible for bringing knowledge of how Council decisions affect their respective districts and what residents really want and need. How is that not the common good? Add in the reduction of cost to run for office and the lessening of outside influence in very local elections and you still have barely topped the list of benefits.

So now what? Do the right thing. Drop the appeal. Bring on district elections.

Guest Columnist Maryanne LaGuardia is a Santa Monica Recreation & Parks Commissioner, a longtime community activist and a member of the California Bar. We thank Maryanne for her contribution this week.

By Maryanne LaGuardia J.D. for SMart (Santa Monica Architects for a Responsible Tomorrow)