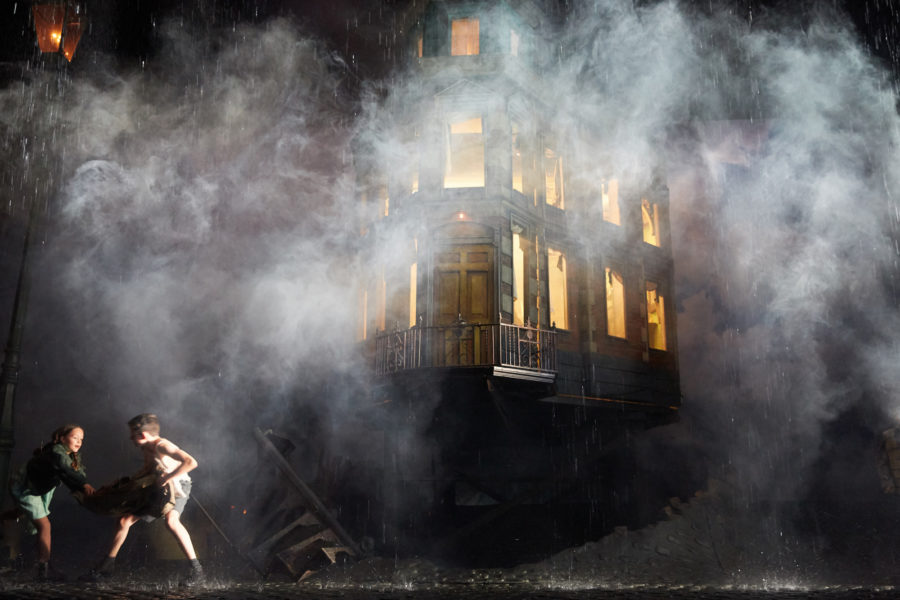 Before the action begins, the curtain is down and a young boy fiddles with it. There might be some sort of symbolism as in “the child may lead them,” but honestly his role was unclear. The curtain is finally raised and we catch a glimpse of a fairytale house perched high above the stage and enshrouded in thick fog. We hear the muffled conversation of people clearly from the upper class of society who are enjoying what sounds like a celebration in their “posh” dining room. I couldn’t help thinking of two old saws: “It was a dark and stormy night; the rain fell in torrents – except at occasional interval.” First conjured up by the English Victorian novelist, playwright, and politician Sir Edward George Earle Bulwer-Lytton, the line became synonymous with the Victorian melodramatic style of theatre. When the interior of the home is finally revealed, the second old saw that sprung to mind was, “There was once a woman who lived in a shoe with so many children she didn’t know what to do.” Why, you may ask, would I think of that? The reason is five formally attired adult members of this aristocratic family are crammed into a space so tiny, that in order to deliver their lines, the actors had to actually crawl through a window or climb over a small balcony fence. Below is the large, basically unused stage. Yes. I get the symbolism. Although crammed into this tiny space, they are still above the masses.

This is a special night in the year 1912. The Birling family consists of Arthur Birling, (Jeff Harmer) a wealthy industrialist and former Lord Mayor and his upper-class wife, Sybil (Christine Kavanagh) and their troubled son Eric (Hamish Riddle). They have gathered to celebrate the engagement of Arthur and Sybil’s daughter Sheila (Lianne Harvey) to Gerald Croft (Andrew Macklin) a successful businessman who dad hopes will take good care of his daughter financially as well as enhancing their business dealings. Rounding out this wonderful cast is the devoted housekeeper Edna (Diana Payne-Myers) who is fiercely dedicated to the needs of the family and unwittingly or maybe wittingly provides comic relief given some of the amusing stage business assigned to her by the director. The celebratory ambiance begins to slowly change as a man in a raincoat suddenly arrives claiming to be the Inspector General (Liam Brennan) who has come to interview the family about the recent suicide death of a young woman named Eva Smith. At first dad denies knowing her at all, until the inspector points out that she actually worked in his factory but was fired because of leading a strike for higher wages. Arthur begins to slowly recollect who she is and insists that he bears no responsibility for her death. The Inspector shows her photo and reads excerpts from Eva’s diary to the newly engaged Sheila who finally confesses that she was shopping in a store where Eva was employed and didn’t like her attitude so she had her fired. So now it’s mummy’s turn and after some prodding, she recollects that the pregnant Eva sought help from the charity which she chaired but advised the committee to turn her down. Sheila’s fiancée also had an encounter with her and finally we find out that she was carrying Eric’s baby. One by one, members of this refined family confess their relationship to the dead woman and have to reach into their collective conscience to acknowledge their share of the blame for this tragedy. The family is devastated by all the revelations and after being told that the body is in the morgue, the Inspector, who interviewed with the accuracy of a sharp surgical knife, finally takes his leave. Dad decides to check on the Inspector’s story and calls the police to see if such a body has shown up. Good news. No such body exists – at least at that particular moment, but wait, the family is in for yet another shocking revelation. If they weren’t such worms, you would almost feel sorry for them.

Priestly is an excellent storyteller and like a good Agatha Christie mystery, slowly peels away the layers of lies and deceptions practiced by this family devoid of a deep moral structure. The superb cast, under Daldry’s crack direction, keeps you on the edge of your seat as the truth is slowly unraveled. As you watch the action unfold, you might wonder who the group of silent spectators are standing stage right. I would venture a guess that they are somewhat like a Greek chorus observing the behavior unfolding before them and serving as a reminder that life at the top is not reflected by life at the “bottom.” Perhaps it was the playwright’s intention to illuminate the sometimes cold, callous, despicable behavior foisted on the lower classes. I guess in some ways, this play written in 1945, is a cautionary tale of the consequences of the indifference to human suffering if that human is not in your social class. Seems very politically timely, don’t you think?