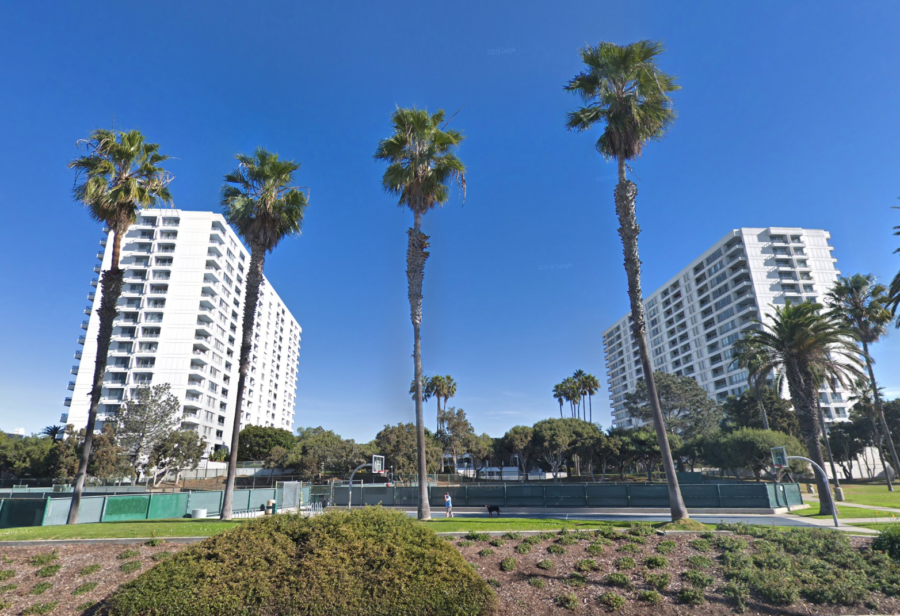 A Santa Monica high rise by the beach caught fire Monday night before Santa Monica and Los Angeles firefighters put out the blaze, according to the Santa Monia Fire Department (SMFD).

On Monday, February 11, at 7:15 p.m. SMFD Engine 2 responded to the Shores Apartments at 2800 Neilson Way to investigate a fire alarm activation. Upon their arrival firefighters discovered smoke billowing from an apartment balcony on the 10th floor of the 17-story high rise building. Additional resources were immediately requested, bringing in all SMFD resources as well as aid from the Los Angeles Fire Department (LAFD).

Firefighters worked to extinguish the flames, which were kept from spreading to the common hallway of the building thanks to an activated fire sprinkler head, according to the SMFD.

“A challenging component to this high-rise fire incident was keeping the dozens of impacted residents safe and out of harm’s way. Firefighters used a combination of sheltering occupants in place until the fire was brought under control, as well as systematically evacuating those who could be, safely out of the building,” SMFD Captain and Public Information Officer Patrick Nulty said in a press release. “Thanks to a functioning fire alarm and fire sprinkler system, residents were alerted to begin evacuating immediately and the fire was kept from spreading.”

According to the department, it took 33 firefighters approximately 19 minutes to suppress the flames, which were confined to the kitchen and living room area. There was extensive water damage to several units below the fire from the fire sprinkler. No injuries to residents or first responders were reported. The resident of the apartment where the fire occurred was not home at the time of the fire, and was displaced as a result of the damage. The cause of the fire is currently under investigation.

Editor’s note: the SMFD press release and a previous version of this article incorrectly listed the Shores Apartments building at 14 stories, rather than 17 stories.