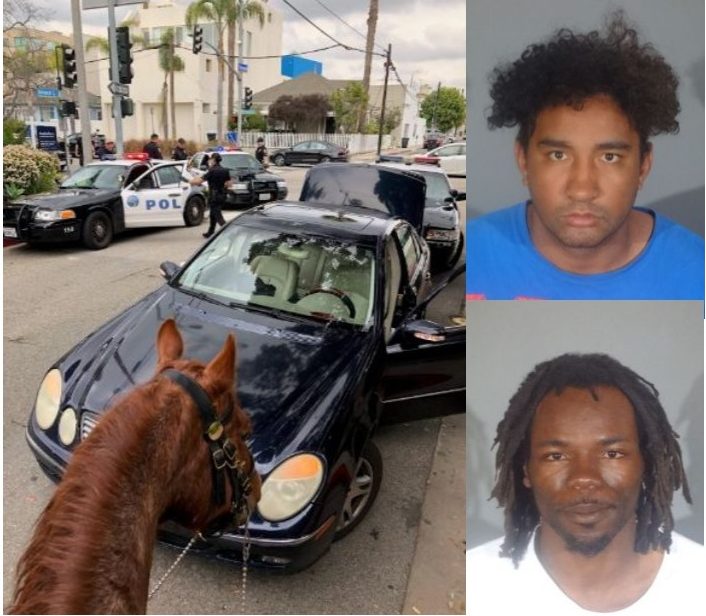 The Santa Monica Police Department (SMPD) carried out an arrest on February 1 with the aid of horses.

While riding their horses (Laredo, Geroge, Sammy and Duke) near the Colorado Ave Esplanade, four SMPD Mounted Patrol officers passed what appeared to be three homeless individuals sitting on the wooden boxes along the path. Soon after, an older, four-door Mercedes sedan pulled up in the red zone, honked its horn and the three homeless individuals hopped in the car, according to the SMPD.

The officers called to dispatch to run the license plate number and learned that the car was stolen out of the City of Pasadena.

Immediately the officers kicked into gear and yelled at the suspects to yield, to no avail.  Their pace quickened as the mounted team pursued the car before backup arrived, taking four individuals into custody.

“New deployment…old school strategy…a solid arrest. Keep your eyes open and ears to the ground. Listen for the trot that lets you know the Mounted Unit is out and positively impacting crime in Santa Monica,” SMPD wrote in a Facebook post.

According to SMPD Lieutenant Saul Rodriquez, two individuals were charged in the incident. Mark Anthony Ingber-Hanley, born 1998, was Booked for 10851(a) CVC – Vehicle Theft; and 12500(a) CVC- Driving without a license. William Francis Miller, born 1978, was booked for having three outstanding warrants.