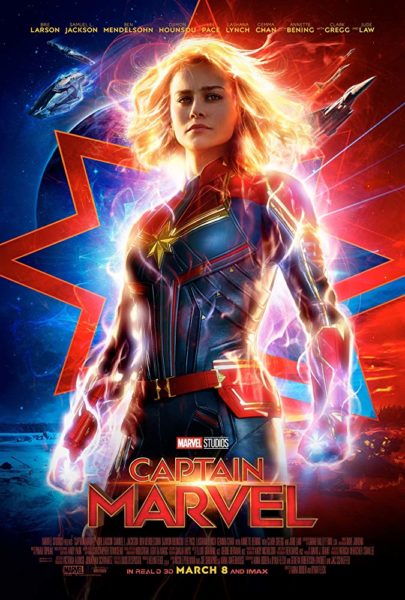 People were lined up last Friday to see this movie, the 21st film in the Marvel Cinematic Universe. The story follows a comic book storyline from 1971 about a war between two extraterrestrial races. A female, Brie Larson, is the star, rather than a male as you might expect.  The movie has been long in development, beginning as early as 2013. Larson was announced as the lead in 2016. She trained intensely for nine months in fight skills. Producers were concerned that she might be realistically too young to portray an air force pilot, so they consulted experts who reassured them that skilled fliers reach their greatest abilities in their late 2os to early ’30s. Larson is 29.

The film is skillfully directed by Anna Boden, a seasoned film and TV writer/editor/director, teamed with Ryan Fleck, writer/cinematographer/director. The two often work together. Most of the film’s environment is dark and mysterious, so when flashes of light do appear, they are stunning. It’s a very well crafted superhero thriller. The editing and special effects are seamless and flow together well. The fight and battle scenes are not overdone as they are in many superhero films. A lot happens in this story, including the introduction of a new character, and the narrative is handled well.

Larson does a great job of showing the arc of her character’s personality as she grows from a girl trying to fit into the concept of others’ expectations, to a woman who finds her strength and courage inside herself. “Carol Danvers,” Captain Marvel’s human identity, is told early in the story to hide her emotions, not to let them destroy her power. She learns that when used under control and with the right timing, those emotions are her strength. Flashbacks of a teenage Carol show that she strives to accomplish feats not usually attempted by a girl, and when she is fails she picks herself back up and perseveres. These scenes remind us that we had the courage to test the limits of “normal” as children, and sometimes we need to look back at our childhood to find it again.

Larson is a different kind of superhero from Gal Gadot, who starred as “Wonder Woman” in 2017. Larson is more natural, low-key and Gadot plays larger-than-life. I’m happy to see someone understated and unexpected like Larson in such a role, just as I enjoyed Paul Rudd’s comedic tongue-in-cheek performance as “Ant-Man” in 2015.

I’m looking forward to seeing both male and female superheroes from now on. Note that this is not a new idea. Where there was Superman, Supergirl arose. Think Charlie’s Angels and Wonder Woman in the 1970’s, Diana Rigg as “Emma Peel” in The Avengers in the 1960’s. Superheroes allow us all, male and female, to summon strength we didn’t know we had.

You will see a wonderful touching cameo from Stan Lee in this movie. He passed away at the age of 95 last November 12th. However, it is reported that he had filmed several Marvel movie appearances that are “still in the can,” yet to be released.