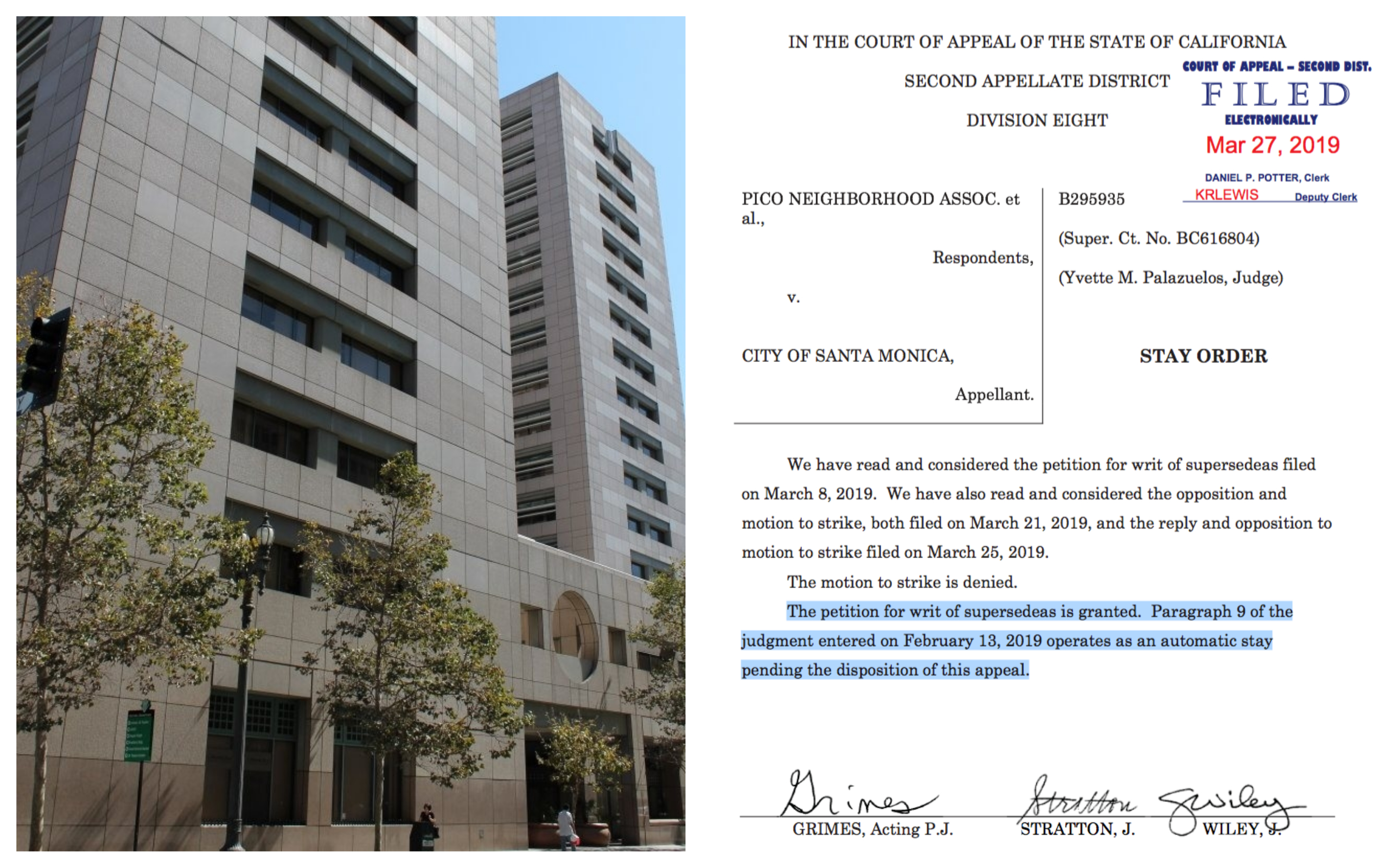 Today the California Court of Appeals ruled that the City of Santa Monica does not need to hold a special election to choose a new council while the City is appealing a decision in a voting rights case.

On March 18 the appeals court issued a temporary stay on a special election when they said that current members of Santa Monica City Council can legally serve during the duration of the city’s appeal. On March 21, the plaintiffs filed an opposition to the City’s petition for a stay, and on March 25 the City filed a reply. On March 27, the Second Appellate District of the Court of Appeal of the State of California issued a final stay order in favor of the appellant, the City of Santa Monica.

“The petition for writ of supersedeas is granted. Paragraph 9 of the judgment entered on February 13, 2019, operates as an automatic stay pending the disposition of this appeal,” reads the ruling signed by Acting Presiding Justice Elizabeth A. Grimes, Justice Maria E. Stratton, and Justice John Shepard Wiley.

Paragraph 9 refers to the section of Los Angeles Superior Court Judge Yvette M. Palazuelos’s February 15 ruling that bars anybody not elected in a district election from serving on City Council beyond August 15, 2019.

In a ruling released February 15, Palazuelos ordered that all future elections for seats on the Santa Monica City Council be based on a seven-district map drawn by an expert for the plaintiffs and that the City hold a special election this summer for all seven seats on the Santa Monica City Council using this new district map. Judge Palazuelos’ ruling prohibited anybody not elected in a district election from serving on City Council beyond August 15, 2019. It is this prohibition of serving after August 15 that the California Court of Appeals has put a stay on with their March 27 ruling.

The appeal process according to Theodore J. Boutrous, Jr, one of the lawyers representing the City, will take at least one year. In a February media briefing, Boutrous said the City will be able to draft an appeal brief within four to six months and that the judge will issue a response a few months after the appeal is submitted and that it will be at least one year before attorneys can make oral arguments.

Rex Parris, an attorney representing the plaintiffs, however, said in a December interview with the Santa Monica Mirror that the chances of the city prevailing in an appeal are low.

“What are the odds of reversing on this appeal? Very remote,” Parris said. “At some point, rational people are going to have to take a look at this beyond their self-interest.”