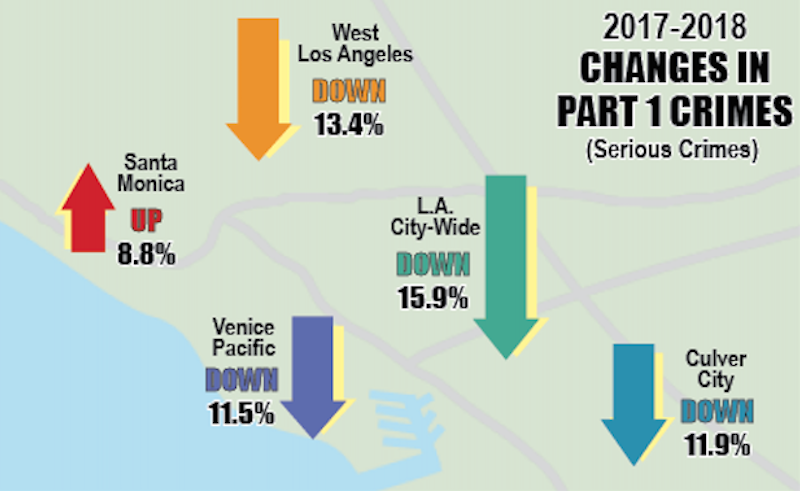 My mother turned 91 last Saturday. Happy Birthday, Mom! She has walked the streets of Santa Monica her whole life and almost always lived in our Mid-City Neighborhood, between Santa Monica and Wilshire Boulevards. She’s a tough lady. She is proud of that label. Very little scares her. She’s sharp. She drives and walks through the city of her birth each and every day. Yet on January 23rd as she walked her beloved silky on 12th Street she had an incident which shook her to her core. I know that because I saw her later that morning and she was both worried and mad. Let me give you the rundown.

She takes her dog on an early morning (6:30 AM) walk and they tour the neighborhood. As she approached Dunkin Donuts a female who appeared to be homeless began screaming at her. The threats grew as my mother drew nearer. When Sandy (now blind and ailing) started barking, the woman, while screaming, told my mother what she was going to do to the dog and to her. My mother moved onto Wilshire Blvd as the woman began to charge at her.  She noticed a passing police car. My mother waved frantically. The police officer may have briefly looked at her, and then kept driving. The screaming woman began to laugh hysterically, shouting, “the police won’t help you,” and told Mom she would kick her and Sandy’s ass if she wanted to. My mom who I told you, is tough, was rattled. She told me that story as I drove her to an appointment and then again that afternoon by phone.

That was a tough morning in Santa Monica. Samohi swim coach Matt Flanders was battered on his way into school early that same day. A son stabbed his parents in Sunset Park, a woman managed to keep hold of her purse on Euclid and Wilshire as a man attempted to steal it. There were a total of 326 calls for police services on that day. That seems to be the norm these days.

My mother wasn’t physically harmed, and who knows if the SMPD officer actually saw her. But my mother was mentally shaken up. Funny, she was more worried about harm being done to Sandy than to herself but she, like many of us, is tired of being resigned to yearly crime increases. 29.1% over 36 months. That’s astronomical. Violent crime has skyrocketed.

Thefts of opportunity are out of control. Santa Monica is one of the wealthiest cities in America. One website states, you have a 1 in 130 chance of being a victim of a violent crime and that we are now safer than just 4% of California cities. If we gather 21 of us together in our town at least one will be the victim of a property crime. That’s astounding, especially when crime in the City of Los Angeles and Los Angeles County declined in 2018.

Last week, I was at a Mid-City Neighborhood meeting and the chairperson related that her garage and car had been broken into recently. I asked if SMPD came out and took a report. She told me that she didn’t think they would do anything and thought the trip to police headquarters would be a waste. She didn’t bother to file a report.

I was at a SMart meeting the previous week and one of our members told me that someone had jumped into his backyard and attempted to open the door to his house. He also didn’t bother calling the police. His rationale: nobody made it inside.

Almost every day, I read emails, talk to my neighbors or get a phone call about an incident that has happened to them. Many times it’s just an unpleasant exchange they had with a homeless human in need, and it’s almost always anecdotal. But why has our crime skyrocketed while other cities have maintained a lid on increases?

We have a well-respected police chief and she has a full complement of beat officers. Can she bring our crime levels down to 2014 levels, for instance?  Or will our city be resigned to yearly increases in crime? More residents are hesitant to walk and shop downtown, while homeowners petition the Planning Commission seeking taller walls around their domiciles. Video camera and alarm company installers are experiencing exponential growth, while community members are reticent to walk in our formerly safe town.

Something has to change. Our City Council, City Attorney, and Police Department must adopt new policies in regards to crime prevention in our city. They must acknowledge that this runaway tide must be harnessed. Whether the cause is the Expo Line, the open beach, or extreme tolerance of unlawful activity in our parks, streets, and alleys, we rely on our public safety forces and the City Council leadership to keep all of us safe. Something has failed in our town. It doesn’t matter whether it is due to drugs or mental health issues, or if thieves think Santa Monica is an easy mark.

Public Safety is a key part of our infrastructure, yet as evidenced by the huge increases in crime statistics, it is crumbling.  When we compare ourselves to other coastal cities in Southern and Central California the answer is always “we are different – we have a freeway and a train.” That answer is no longer an adequate excuse. Our residents, our workforce and our tourists can’t tolerate the wave of criminal activity that is now pervasive in our town.

Above all, my mother doesn’t deserve the verbal and physical abuse she now fears on the streets of Santa Monica. Every City Council meeting should no longer be about development, ways to quash “public comment,” or how to save water or have cleaner electricity.  There should be only one topic: Make our city safe. Reduce Crime. Now.