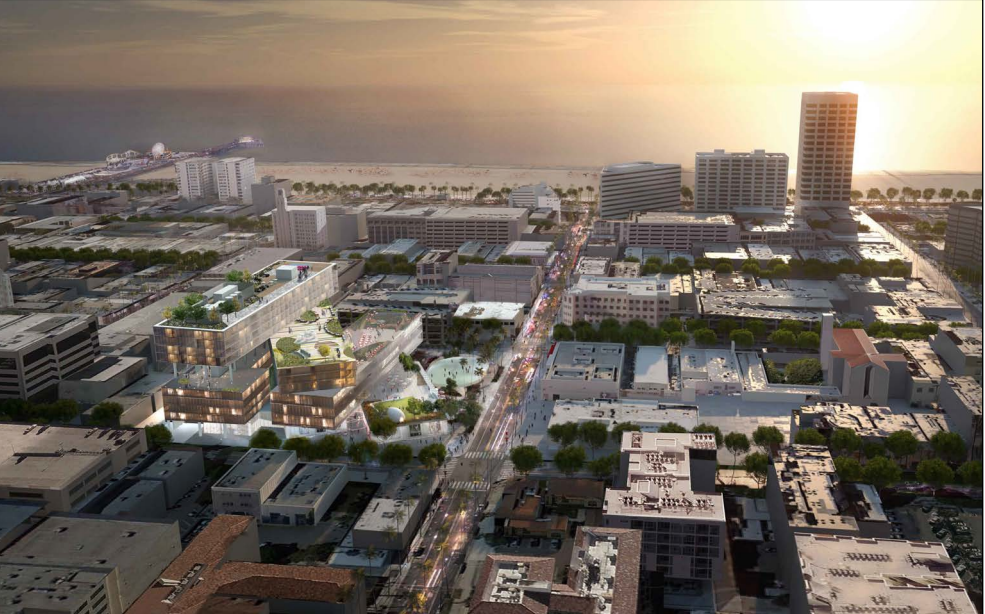 Yes there is. Small as it is, there is about 2.5 acres in the heart of downtown waiting to be designed as a public park/plaza. Well, maybe. Our city has designed and approved a Downtown Community Plan (DCP), recently adopted, that doesn’t have a requirement for a park or plaza, and the potential open space area of public land at 4th/5th streets and Arizona Avenue is currently destined, it seems, to be a twelve-story commercial development with the blessing of our current City Council, unless the residents find a way to stop the proposed development.

It’s not yet a done deal, but considering that it has been in the works before the Planning Commission and City Council on several occasions over the last four years or so, and continues to be active in the approval process, we (the residents) better become a loud squeaky wheel or it will be a done deal, and there is no other similar publicly owned site downtown. Why should we, the residents, allow the City to give our public land to a private developer for their profit? We shouldn’t, just as we shouldn’t have allowed the City to give another 2 acres or so of public land at the Civic Center to Santa Monica College (SMC) for a privately run day care center for $1.00/ year rent – yes, one dollar per year for the next 55 years. Gratefully, it looks like the Coastal Commission just this week approved the sports playing field at the Civic Center and construction may begin this summer. Thanks to a very loud vocal public demand over a much too long a period of time.

There is another large open parcel of land that the City has been diligently picking at and trying to close down, and that is our Santa Monica airport, SMO. Those who have supported its closure argue, and attempt to convince others, that it will become a 227-acre park. How many actually believe that those 227 acres, which incidentally is the same amount of land area that comprises the entirety of downtown at 228 acres, will become a park, when there is no indication that the City will even yield 2.5 acres of our land for a park/plaza in the downtown area and the effort it took to get one sports field. The airport is at least open land as is and produces revenue for the City.

The City commissioned a report by The Rand Corp. (the employees of which will be the likely users of the child care center at the Civic Center on our land) in 2012 to study airport land use titled ”Santa Monica Municipal Airport (SMO) Options for the Future” (https://www.rand.org/content/dam/rand/pubs/documented_briefings/2012/RAND_DB639.pdf). It includes some insight to its potential future use. For example it says, “The SMO campus offers appropriate space and ample parking space for an incubator in reasonable proximity to downtown Santa Monica and UCLA. It would be possible at modest cost to recycle or upgrade an existing older building on the nonaviation land at SMO to start and to add space as needed. Although some people spoke to us of eventually needing millions of square feet, it seems possible…” (page 31, emphasis added). Or this, “A formal affiliation may be appropriate between an incubator and SMC, which is already at the airport on the Bundy Campus. Several senior officers of the college were consulted in the course of our study, and they were enthusiastic about linking a potential incubator with their own growing focus on economic development and the training of a more technically educated and sophisticated workforce. An appropriate role for SMC to support the incubator is specialized technical training of the workforce at the incubator.” (page 32). Insightful hints at the potential future use of that land, and one should know that SMC, for example, process plans only thru the Office of the State Architect and are exempt from City Building or Planning codes, and zoning regulations. Note too that, per Measure LC, education and recreational uses can be approved on the airport land by the council without a public vote.

So what other open space is available to residents to maintain and enhance our, and the region’s, quality of life? The Open Space Element describes the State definition of “open space” as “any area of land or water which is essentially unimproved and devoted to an open space use as defined in this section, and which is designated on a local, regional, or state open space plan as any of the following:… and lists several categories, but the one that fits Santa Monica is the category of open space for the purposes of outdoor recreation. Included in that definition is “walking along tree lined streets…plazas and community gathering places…” (emphasis added). Hmmm, makes one think how appropriate for our public land at 4th/5th streets and Arizona Avenue.

Also included in The Open Space Element as “open space” are streets, and one might assume that includes alleys. As a personal observation, I have not seen a resurfacing or cleaning of the two allies near me in Ocean Park in more than 35 years. It does seem if alleys and streets are a part of our Open Space Element then they should be maintained in a fashion that helps “maintain and enhance our quality of life”. Having been involved in working on three street improvement designs I am aware the City is moving in the right direction in some respects in some locations, but to ignore the obvious use of 4th/5th and Arizona as a park/plaza in the heart of downtown, on our city land, is unconscionable and another misuse of our limited resources if given to a private developer.