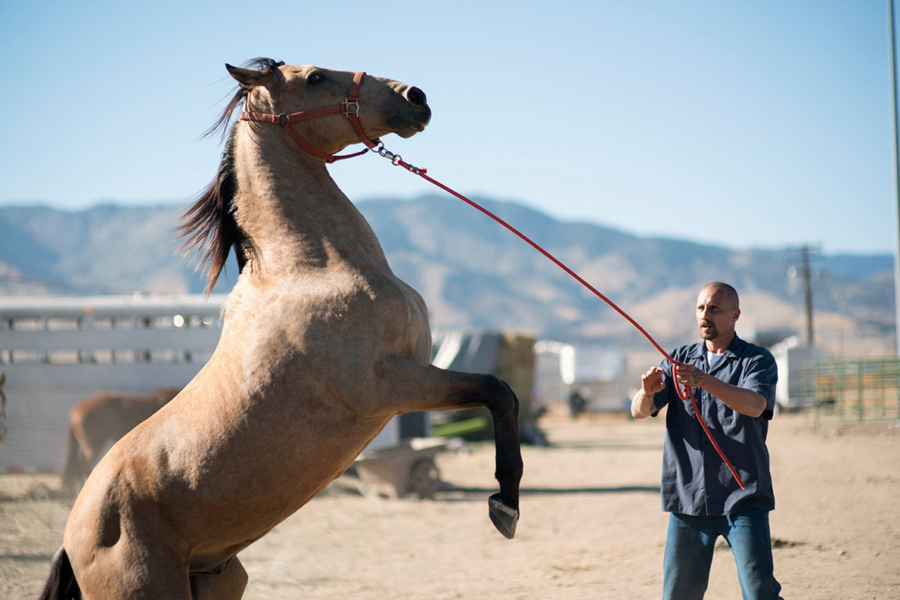 Director Laure de Clermont-Tonnerre makes her very impressive directing debut with a fascinating feature and has gifted moviegoers with a profoundly mesmerizing film.  Co-written by the director with Mona Fastvold and Brock Norman Brock in collaboration with Benjamin Charbit, “The Mustang” is a deep, penetrating look into a popular prison program in some penitentiaries in the American West whereby wild Mustangs are rounded up via a helicopter hovering overhead, forcing the galloping herd into prison holding areas where they will be assigned an inmate to train them for auction.  Beginning with the opening shot of the wild herd running for their lives, the director weaves a haunting story of rehabilitation and redemption, which will keep you mesmerized up until the very last frame.

“The Mustang” is based on real events and revolves around the character of Roman Coleman, brilliantly played by Matthias Schoenaerts.  He is a hopelessly lost soul serving time for domestic violence in the Northern Nevada Correctional Center as a result of inflicting such bodily harm on his wife, that she is barely out of a vegetative state.  There is intense fury locked inside of him that at his prison interview, conducted by the prison psychologist, sympathetically played by Connie Britton, he remarked that, “I don’t do well around people.”  He is a total loner disconnected from any ability to interact with anyone and speaks only when forced to, at which point one can see the pain and reluctance he goes through to say even a simple “yes” or “no.”  Roman’s inability to communicate is not lost on his 16-year-old pregnant daughter Martha, nicely played by Gideon Adlon.  Witnessing the beating of her mother, she has nothing but distain for her father.  She visits him in prison where he is not happy to see her and says, “What the f##ck are you doing here?”  She wants him to sign off on a deed to her grandmother’s house so she can sell it and use the money to buy a business with her boyfriend.  However, at first her father refuses but as he gets more and more involved with his horse, as well as attending anger management classes, feelings come up for him that have been cemented shut for decades.  He asks his daughter to come visit him again so he can sign the papers and try to establish communication with her going forward.

Wanting to work by himself, Roman is assigned to clean up horse manure in and around the stables where the wild Mustangs are being housed awaiting a 90-day training regimen after which they will be auctioned off to the local townspeople.  Unlike the other horses that are in outdoor corrals, there is one horse that is locked away, neighing, rearing up on his hind legs, and constantly kicking the walls.  Roman is drawn to this misfit of a horse who, like himself, is totally violent and antisocial.   Myles, play by crusty Bruce Dern, who gives a solid performance, is in charge of the prison horse-training program. He decides to assign the training of this difficult horse to the maladjusted prisoner and although they may be kindred souls at heart, this horse and man are off to an extremely rocky start, resulting in some mutual bodily bruising, earning his would-be trainer time in isolation.  Eventually, Roman is back in the training corral and gets a lot of support from a fellow inmate trainer Henry, beautifully portrayed by a most charming Jason Mitchell.  Naming his horse Marquis, slowly, ever so slowly, a mutual admiration, trust, and respect begins to evolve, creating an almost unbreakable bond between them.  Perhaps the relationship between this troubled man and his horse serves as a metaphor for the redemption of two wounded souls coming together for mutual healing.  The day of the auction arrives and Roman proudly rides his horse around the arena.  What transpires is quite unexpected and shocking, as is the dénouement.

Matthias has meticulously captured the troubled, angry, disconnected inner life of his character and gives one of the best onscreen performances to date.  Although he has been a familiar face on episodic television, as well as on the big screen, appearing in such films as “The Danish Girl,” “Rust and Bone,”and “Red Sparrow, he has not been what the industry refers to as a “bankable star.”  I assure you after this searing, multi-layered, highly textured performance, he will be catapulted to that relatively short list of box office stars and is my first nomination for this year’s Academy Award for Best Actor.  His intense, organic inner life, in my opinion, earns him a place in that coveted club of brilliant actors some of whom include, James Dean, Marlon Brando, Montgomery Clift, Robert De Niro, Dustin Hoffman, and Al Pacino.  I have already added Tom Hardy to that list, who, by the way, was the lead character in “The Drop” in which Matthias gave a spellbinding performance as Eric Deeds, a really bad, but fascinating character.  Since I’ve opened up the subject of Academy Awards, I would also like to add Laure de Clermont-Tonnerre for Best Director and Best Original Screenplay.  So, in late March, we are officially off to the 2019 Oscar races – no pun intended.