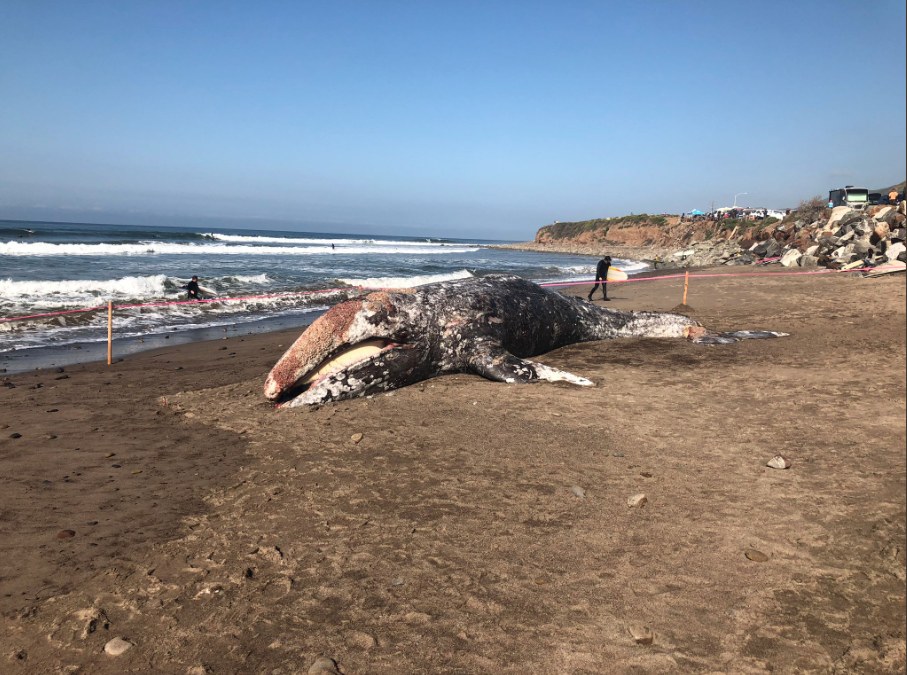 From San Diego and Los Angeles to Santa Barbara and San Franciso, major cities are commonplace along much of California’s coast. Amid the hustle and bustle of these metropolises, it is easy to forget the nature that exists in many residents’ backyards. Last week in Malibu, however, residents and beachgoers got a visual and olfactory reminder of their proximity to wildlife when a  young dead gray whale washed ashore at County Line Beach, greeting beachgoers with the smell of decaying flesh.

“It smelled foul,” Cole Miller, a local actor who was surfing nearby, told the Santa Monica Mirror. “I had never seen a whale that before, so I was in awe of how large it was compared to me. Other people poked at it, but I didn’t want to. There was dried, dirty blood oozing from its eyes and mouth. It was pretty gross, but amazing to see a creature like that right in front of me.”

Authorities believe the carcass washed ashore around 3 a.m. Sunday, March 24. According to the California Highway Patrol (CHP), the whale is about 40-feet long, the size of a semi-truck. There are several gashes on the whale’s side, though it is still unclear how the whale died. More details will become available after Diane Alps, President of the Channel Island Marine and Wildlife Institute and her colleagues release information from a necropsy performed March 25. According to the CHP, authorities do not plan on removing the carcass of the whale and will instead let nature take its course and carry the body out to sea.

While experts were performing the necropsy on the 40-foot long mammal, rescue crews just up the coast in Oxnard spent Monday attempting to rescue another gray whale trapped in a bouy net near Channel Island Harbour. Spotted by passengers on a boat Sunday, responders Monday and Tuesday had a difficult time untangling the whale, which is around 20-feet long, due to the animal’s skittishness.

“Every time we tried to get close to it, the whale would get scared and dive underwater, taking the buoy with it,” Mark Barney, a spokesperson for the United States Coast Guard (USCG), told the Los Angeles Times.

According to Barney, because the whale kept swimming away, authorities have been unable to tell if the whale is injured, distressed or to what degree the animal is entangled. To help with the rescue, the USCG called in the National Oceanic and Atmospheric Administration (NOAA) for assistance.

In the 17th century, gray whales were on the verge extinction due to commercial whaling, and while the Pacific Ocean population has since recovered, groups in the Atlantic Ocean never did. There are currently around 26,000 gray whales found throughout the world, all in the Pacific Ocean, and their Eastern North Pacific stock is the largest group. According to the Marine Mammal Center, gray whales have the longest migrations of any mammal.

During summer, gray whales live in the Arctic in areas rich in their food, bottom-dwelling organisms. As fall arrives, however, there is less sunlight, less food, and the water turns cold, and the whales swim to Baja California, Mexico where they enter lagoons to give birth and mate. Therefore, gray whales can be observed passing by California in December and January during their southern migration, and again in March, April, and May on their northern journey. As human activity has increased along gray whales’ migration route, these mammals are facing a new set of challenges.

“Gray whales generally stay around the continental shelf and are truly a coastal species…[and] migrate relatively close to shore,” the Marine Mammal Center writes on their website. “Concern has grown about the impact of boat traffic around whales, and the number of boats allowed in the breeding lagoons is restricted. Along the migration route, boats’ proximity to whales is also limited.”

While authorities have yet to determine the cause of the gray whale’s death in Malibu, the incident near Channel Island Harbour is a stark reminder of the impact human activity can have on these giant mammals.