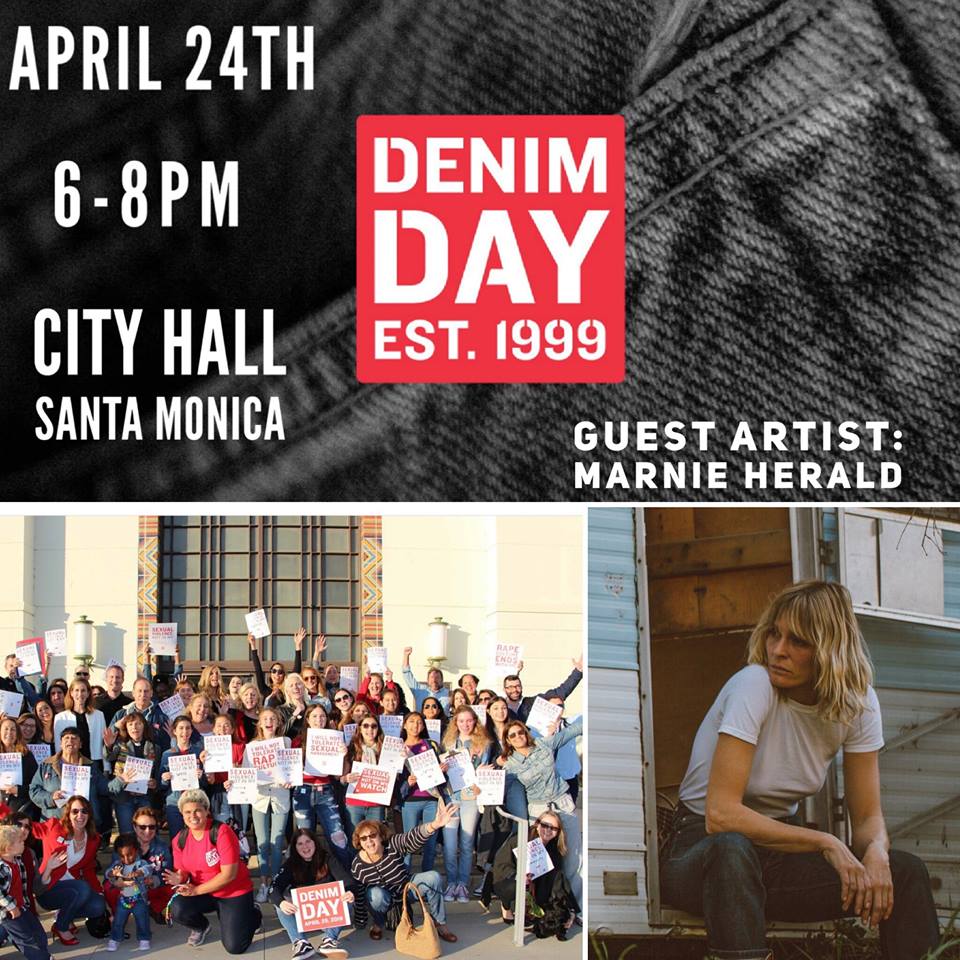 Tomorrow, millions of people worldwide will wear jeans with a purpose, saying, “There is no excuse and never an invitation to harass, abuse, assault, rape!”

Santa Monica’s Commission on the Status of Women will commemorate the 20th anniversary of Denim Day on the steps of City Hall in Santa Monica, 1685 Main Street, Santa Monica, California, on Wednesday, April 24, 2019 at 6 p.m. The annual sexual violence prevention education campaign reminds people everywhere that “there is no excuse and never and invitation to rape”.

“All are welcome at this celebration of two powerful decades of Denim Day and it’s vital message, which has ignited meaningful dialogue and profound societal change,” said Elena Christopoulos, Commissioner, Santa Monica Commission on the Status of Women. “Join us—survivors, artists and the Santa Monica community—in this rape prevention and education campaign. You, your colleagues, your friends and family can make and important social statement with your fashion statement by wearing jeans as a visible reinforcement against sexual violence misconceptions.

Denim Day is an international campaign created by the LA-based nonprofit Peace Over Violence. For 20 years, the campaign has provided crucial healing services for survivors of sexual violence while also educating the public about sexual violence, harassment, assault and rape via its accessible call to action: wearing jeans with a purpose.

“A recent national survey found that 81 percent of women and 43 percent of men say they have experienced sexual harassment or assault during their lifetimes,” said L.A. County Supervisor Sheila Kuehl. “Over the past few years we have made great strides in the fight against sexual harassment, but we can and must do more. That is why I am delighted that Santa Monica is marking its third Denim Day, and that the City is actively fighting to end sexual harassment and assault.”

Denim Day recalls an Italian Supreme Court case that sparked international outrage when a judge overturned a lower court’s conviction of a rapist because the victim wore jeans. The judges ruled that because the victim was wearing tight jeans, she must have helped her attacker remove them, thus implying consent.

2019 marks the third Denim Day held by the City of Santa Monica.

“We invite everyone to attend on the 24th and make a positive impact, establishing solidarity with your community that will have a lasting impact by creating a diverse, inclusive, safe environment,” said Santa Monica Mayor Gleam Davis. “We must use this occasion to reinforce the message that everyone should feel safe in our community and that we will not tolerate sexual harassment, abuse, assault, or rape.”

Patti Giggans, Founder of Denim Day and Executive Director of Peace Over Violence. added, “together, we can heal our community, advocate for survivors, and educate more people about consent.”