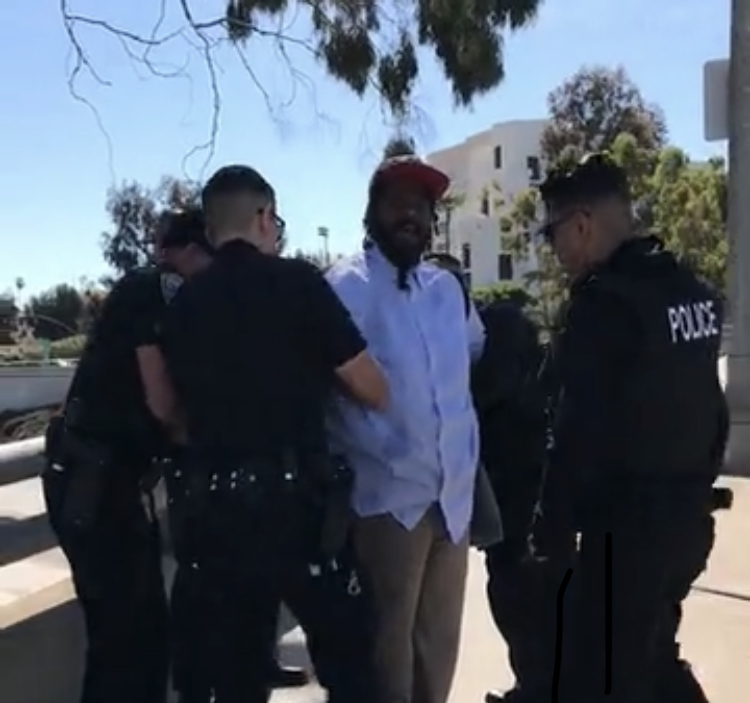 A cell phone video uploaded over the weekend on Facebook shows the moment five Santa Monica police officers stop, physically detain and arrest a black, male bicyclist, identified as Dwayne Sampson, for riding his bike on the sidewalk.

The April 12 encounter was witnessed and recorded by Marcy Winograd. She records as police officers can be seen twisting Sampson’s arm behind his back while telling him to “put your arms behind your back, you’re being arrested.” In return, Sampson shouts “I have not committed any crime,” “stop squeezing my arm,” followed by “you’re hurting me!” The video has been shared almost 100 times on Facebook and viewed more than 3600 times, according to Winograd.

The Facebook video cuts out there, but Winograd sent the Santa Monica Mirror, as well as members of the Santa Monica City Council and City Manager Rick Cole, two other videos of the incident. They’re also posted on her Vimeo. The first video is 33 seconds long. It shows Sampson standing with his feet together and hands clasped while four officers tug at his arms. The second video is 55 seconds and shows officers touching Sampson’s hair and removing his hat while Sampson tells the officers not to touch him. One of the officers can be seen picking up Sampson’s wallet, which has fallen on the ground. He removes what appears to be Sampson’s ID and attaches it to his police uniform. They then place him in the back of a patrol car. To view the videos: click here.

“After I turned off the video, the bike rider shouted that the police had injected something into his arm,” Winograd writes on her Facebook post accompanying the video. “I asked one of the officers if they had injected the man with drugs, and the officer said he didn’t know. I told him I thought this was a heavy-handed use of force and the officer said they had to be sure the bike rider wasn’t wanted for other crimes.”

Winograd, a Santa Monica resident and Coalition for Police Reform volunteer wrote an email to Santa Monica Police Chief Cynthia Renaud that says not only did police stop Sampson unnecessarily but that he did nothing to warrant the amount of force used.

“At no time did the bike rider become violent or pose a physical threat, but rather stood erect and questioned whether he was being detained–and why he needed to show his ID,” Winograd wrote.

She also wrote that she later saw other bicyclists doing the same thing a few hours later,

”I saw three other bike riders doing exactly what this man did–riding on the sidewalk on 4th street next to the #10 freeway,” Winograd wrote.

The Santa Monica Mirror has requested the police records of Sampson’s arrest but at the time of publishing these have not been provided.

Winograd says she believes he’s being held for obstruction. She visited him in the Santa Monica jail where he said he’s being held on a $10,000 bail. He also told her that during the incident the police officers broke his arm.

The Mirror has reached out to Police Chief Renaud for comment but she has not responded to our request.

In the email correspondence to Chief Renaud, Winograd requested Sampson’s release from jail, telling Renaud, “his civil rights were violated.”

Chief Renaud responded to Winograd by saying she needed more details surrounding the arrest to figure out if any use of force protocol were broken.

“I have watched all the videos you sent in and I definitely see that an arrest took place of a person who did not want to be arrested,” Renaud wrote.

Statistics on police use of force are hard to get ahold of, but, under AB 71, as of January 1, 2016, all law enforcement agencies have been required to begin collecting data on use of force incidents for submittal to the Department of Justice. The submission of that started on January 1, 2017 and 2018’s report has not yet been publicized. California uses URSUS, a California Department of Justice application, to compile and publicize this data.

According to an URSUS report, “In 2017, there were 707 incidents reported that involved use of force resulting in serious bodily injury or death of a civilian or officer; or the discharge of a firearm.”

Of the 741 civilians, 43.9% were Hispanic and 30.2% were white. The report also states that 19.3 percent of civilians involved were black, even though recent census information estimates California’s Black population at only 6.5%.

The report also says 27.3% of the incidents took place in Los Angeles County, but only lists one incident for Santa Monica.