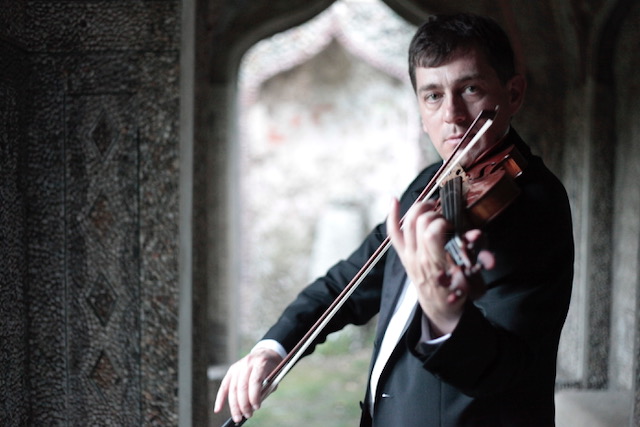 Although the great Sergei Rachmaninov is known as a Russian composer, he actually spent the last three decades of his life in America, first in New York and later in Beverly Hills. Santa Monica Symphony (SMS) will be performing the last of his works, the famed Symphonic Dances, in a free concert titled “Coming to America,” celebrating the accomplishments of immigrant composers, on Sunday, April 14 at 7 p.m. in Barnum Hall (on the campus of Santa Monica High School).

The concert will open with the “Star Spangled Banner” – not the typical version one usually hears, but a unique arrangement by another great Russian who moved to the United States, Igor Stravinsky. According to SMS Music Director and Conductor Guido Lamell, Stravinsky originally put this arrangement together when he was asked to conduct a Boston Symphony concert; however, the Boston police caught wind of this and admonished him that it was against the law to tamper with the national anthem.

“He performed his version complete with unfamiliar harmonies and the police confiscated the parts,” Lamell explained. “Popular myth suggests that Stravinsky was arrested, but that is not the case. Since that time, his version has been performed often – sometimes accompanied by a fake mugshot of Stravinsky in the program for dramatic effect!”

Following the “Star Spangled Banner,” the orchestra will be performing the “Malaguena,” a beloved piece by Cuban composer Ernesto Lecuona. Lecuona was an extremely prolific composer and a talented pianist who wrote over 600 pieces and is known for bringing fame to Cuban music in the classical realm. According to Lamell, although Lecuona was Cuba’s most famous composer, he was exiled when Fidel Castro came to power, and he took up residence first in New York and later in Florida. The “Malaguena” is Lecuona’s most famous work.

“This arrangement, by Morton Gould, a prominent American composer and conductor, is a virtuosic rendition of the piece that actually contains some quite technical challenges for the orchestra,” Lamell noted.

The April 14 concert will also feature a performance of Miklos Rozsa’s Spellbound Concerto for Orchestra. Rozsa was a Hungarian composer who came to the United States in 1940 to compose film scores for Hollywood. The Spellbound Concerto is based on music originally composed for the 1945 Alfred Hitchcock psychological thriller Spellbound, which deals with themes of mental illness. Rozsa would go on to win an Oscar for the soundtrack.

“The concerto has this marvelous tone of instability and mystery and darkness, and even the beautiful, extremely recognizable main melody has a certain unsettling character,” Lamell said. “Even though it’s beautiful, it still is somewhat disturbing.”

This piece is unusual in the orchestral repertoire for its use of the theremin. This is an electronic instrument that Lamell describes as making “very unusual, science-fiction like sounds.  It is the only instrument that one does not touch in any way,” Lamell said. “Sounds are created when theremin players move their hands in and out of electrical fields emitted from two antennas.”

A highlight of the “Coming to America” concert will be the performance of Franz Waxman’s Carmen Fantasie by the LA Opera’s Concertmaster, Roberto Cani. Mr. Cani has performed with the Santa Monica Symphony once before to wild standing ovations and is “one of the greatest violin virtuosos residing in Los Angeles,” according to Lamell.

Franz Waxman was a German Jew who came to the United States in the 1930s after suffering a severe beating from Nazi sympathizers in Berlin. He wrote this piece for the soundtrack of the film Humoresque which received an Academy Award nomination. Jascha Heifetz was originally slated to perform the Carmen Fantasie for the film, but was replaced by a young Isaac Stern – whose hands are seen in the film. After hearing Stern’s performance, Heifetz asked Waxman to expand the work for him so he could play it on the Bell Telephone Hour. It is considered to be one of the most dazzling and daunting showpieces for the violin.

Rachmaninov’s Symphonic Dances will close the program. Rachmaninov first performed a two-piano rendition of the work with the renowned pianist Vladimir Horowitz at a private home in Beverly Hills in 1941. (Incidentally, Rachmaninov’s 146th birthday took place earlier this month on April 2nd.)

“I selected this piece because I’ve dreamt of conducting it my whole life,” Lamell said. “It’s one of my absolute favorite pieces and I think it’s Rachmaninov’s greatest work. It is extremely challenging for the orchestra and shows off its powers through magnificently powerful rhythmic styles, and brilliant orchestral innovations.”

The main theme in the second movement of the work is given to the saxophone and has a “gorgeous and haunting quality,” according to Lamell.

“In the overall character it’s a struggle between dark and light themes, representing life and death, but certainly ends on a victorious note with the word ‘Hallelujah’ written in Rachmaninov’s hand in the score in the last movement,” Lamell noted.

As with all Santa Monica Symphony concerts, this performance will be free and ticketless. More information is available at www.smsymphony.org.