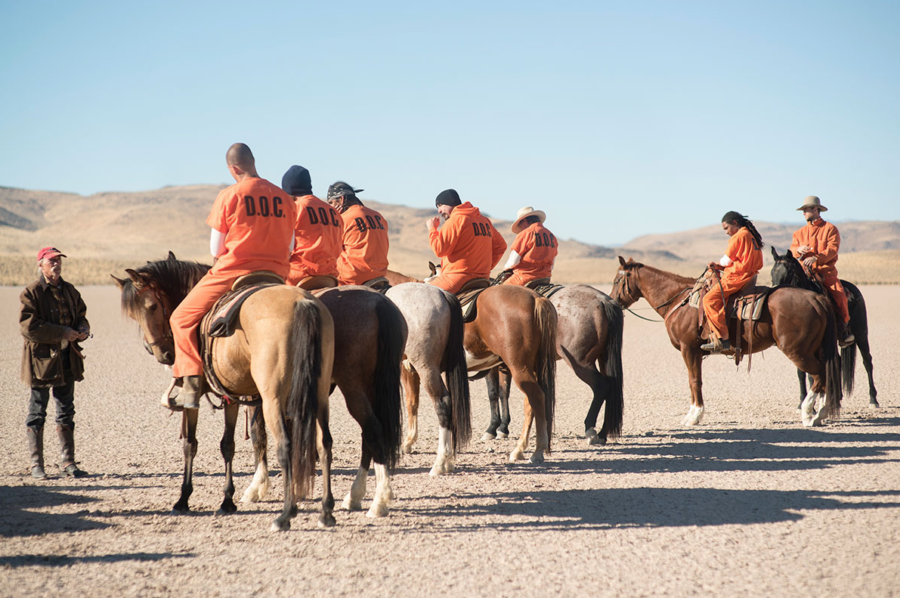 “The Mustang” is the first feature length film by writer/director, Laure de Clermont-Tonnerre. In 2014 she wrote and directed a short film called Rabbit, about a female prisoner who bonds with a rabbit as part of a Pet Partnership program. Rabbit serves the same purpose as a sketch would for a painter commencing work on a grand canvas. “The Mustang” is that finished cinematic painting.

This film is epic in style, with meticulous detail and has the realism of a documentary. From the beginning scenes of wild mustangs in Nevada being rounded up by helicopter and herded into a corral, to the vivid portraits of the lives of hard line prisoners who train the horses, to the bonds that are created between people and animals, this film never loses its rhythm. It carries you into a different world. The story is rewarding in understanding of human nature and of the huge impact of small acts of kindness, a reminder of the intricate nature of our relationship with our surroundings and the space around us. Cinematographer Ruben Impens has captured the widely varied landscapes and interiors with skill. The editing and music provide the rhythm that keeps the story moving to the end and key points in the revelation of the story are made visually rather than verbally.

The director, as an actress herself, selected an extraordinary cast. Matthias Schoenaerts, already one of my favorite actors to watch, provides a deep performance as Roman Colman, a hardened prisoner with extreme anger issues covering deeply hidden intense emotions. Bruce Dern plays the head trainer displaying underlying sensitivity balanced with a sarcastic sense of humor. Jason Mitchell is the “class clown,” with attitude. Gideon Adlon has a wonderful grasp of the deeply internalized relationship she has with an absent father. Connie Britton is memorable  as the prison psychologist. Thomas Smittle’s performance stands out. He is a minor character, the centerpiece of one of the most beautiful and emotional scenes in the movie, and is in reality one of the prisoners involved in training the wild mustangs.

In a discussion following her film, de Clermont-Tonnerre noted that she gave the film a European pace and sensibility, allowing the audience to absorb the impact of emotions and color. She wrote the original screenplay four years ago, then spent four years researching, interviewing inmates, psychologists and staff at prisons. When she returned to writing her script, she had more than enough material for the original story, so she decided to focus on one man and his horse. In casting the lead role of Roman Colman, she auditioned several actors. When she met Schoenaerts she know immediately that he had the wildness, intensity and physicality to embody the character.

“The Mustang” is a timely and important movie. There is much political outcry at the present time over the US Bureau of Land Management’s proposal to lift regulations against the slaughter of wild horses that have been captured and are in holding areas. To read about the BLM and the history of the wild horses, see https://abcnews.go.com/US/wild-horses-facing-slaughter-us-government-proposes-regulations/story?id=52538898 and google “Wild Mustangs.”