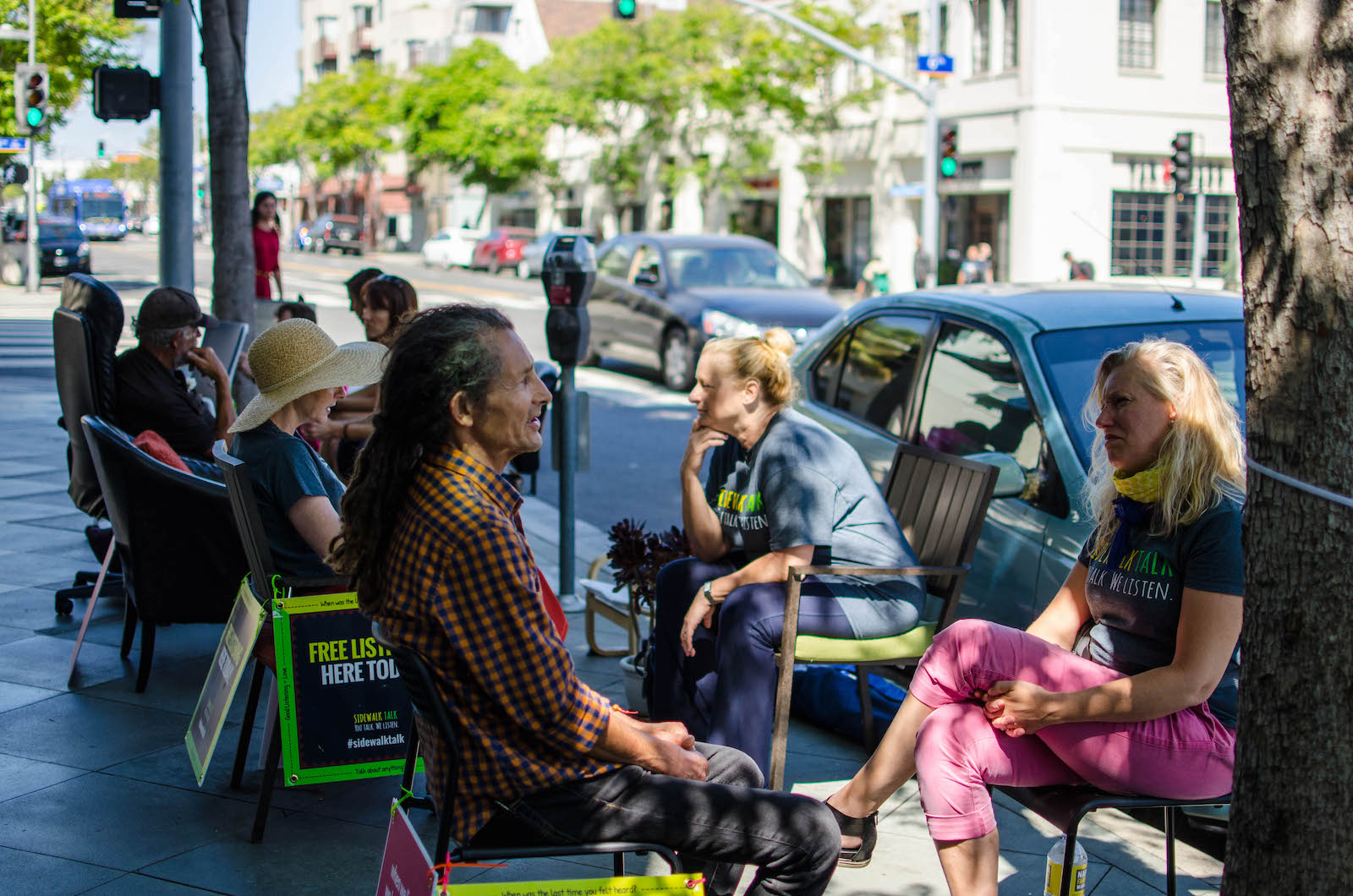 Head out to the sidewalk this evening and walk to talk.

Sidewalk Talk is a global listening movement dedicated to providing the public with safe opportunities to be heard. Four years ago, Sidewalk Talk Director and Founder Traci Ruble was inspired to take to the streets and simply listen. Ruble explained, “I’m a psychotherapist, and I work full time as a psychotherapist. A couple things really motivated me to want to put my chair on a sidewalk. One was sort of the hatred and violence going in our society. And two, it seemed like people were struggling. I wasn’t going out there to say, ‘Hey, you’re broken, and I’ve got all the answers.’ It was more saying, ‘What’s going in our society today that we are aggressive and mean?’ People are shooting each other, and we’re being non- inclusive to people that are different from us. There’s so much inequity.”

In May 2015, Ruble along with 27 other volunteers sat out on San Francisco sidewalks in 13 different locations, catching the attention of several press outlets in the process. Ruble continued, “NPR actually mic’d me while I was listening, and one of our talkers was willing to be mic’d. On the air, he publicly came out as being somebody with Acute Bipolar 1 Disorder. He wanted to say, ‘Look, people struggle with stuff that you don’t even know.’ He looked like a regular tech worker; you would never know.”

Following the listening event, several organizations throughout the country expressed interest in doing something similar in their cities. Ruble continued, “Over time, it’s grown to over 50 cities in 12 countries now. And there are 6,000 of us that do this.” Ruble added, “What we’re actually trying to do is generously say, ‘I’m here to hear you,’ with whatever it is going on for you. It could be I just fell in love, or it could be I’m really depressed. What we know fundamentally is that we as a society don’t connect with each other anymore, yet it’s a biological drive that we have as people.”

In honor of Mental Health Awareness Month, Sidewalk Talk will be holding its 4th annual listening event today from 5 p.m. to 7 p.m. Co-sponsored by SimplePractice, 60 volunteers will be stationed in several locations throughout Santa Monica including the Pico Branch Library, Espresso Cielo, Metro- Transit Hub, Philz Coffee, Santa Monica City Hall, Santa Monica Pier, WeWork by AMC, St. John’s Hospital, UCLA Health. Their sole purpose is to listen to anyone who needs to be heard and amplify the mental health of the community around them.

Ruble added, “It’s the disruptive element of being out there on the sidewalk that wakes people up to our need for connection. It also gives people walking by, who maybe didn’t have the courage to sit down, to at least have the courage to talk to somebody later because they watch so many other people being courageous. We’re planting that seed. Look at how many people sit down and talk to other people about what’s going on with them. You can do it too.”

To learn more, including a full list of locations and chapters, visit: www.sidewalk-talk.org