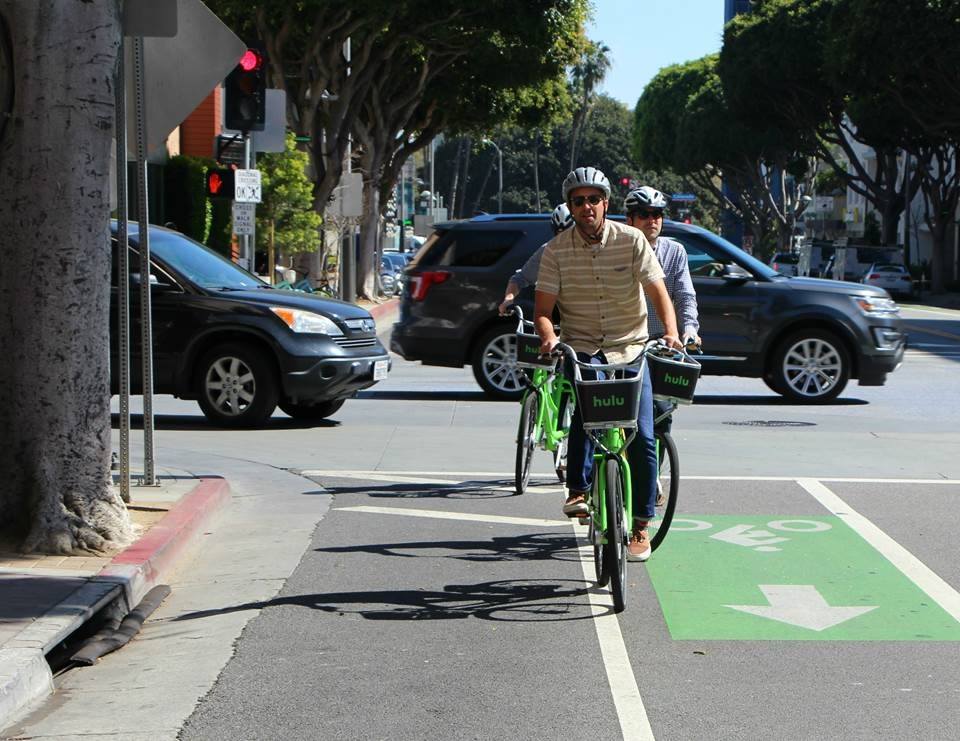 UPDATE: because of forecasted rain, some of the events planned for May 16 have been moved to Friday. Click here for more details: https://www.santamonica.gov/blog/celebrate-bike-to-work-day-on-may-16

Santa Monica, with 113 miles of bike paths, is one of the more bikeable cities in Southern California.

PeopleForBikes recently released its second annual rating of bicycling in U.S. cities and Santa Monica was ranked #17 out of over 500 communities and while every day is a bike day is Santa Monica, tomorrow is especially. so.

As a part of National Bike Month, LA County and Santa Monica are offering a variety of different pit stops and activities for riders to enjoy during the 25th Annual Bike to Work Day. Nationally celebrated on May 17, the City of Santa Monica and Metro will be holding festivities on May 16. With just your helmet or bike, residents can claim a free ride on any Metro bus or rail line. Breeze Bike Share, Beach Cities Transit, LADOT and Big Blue Bus are among the other agencies also offering free transit.

Santa Monica’s Breeze Bike Share is offering free ride time all day on May 16. Bicycle commuters can also use Big Blue Bus for free by simply bringing their bicycle or bike helmet on board.

According to Santa Monica Spoke, an organization dedicated to improving walking, biking and healthy active transportation in the City of Santa Monica the purpose of National Bike Month is to bring attention to other modes of transportation and to get people interested in biking.

“Many times, we don’t do things because we haven’t tried them in the first place. This is a way to get people introduced to it and give them a support network to maybe give it a try that first time. A lot of people figure out that it’s not that hard, and it’s kind of awesome to get out and get a nice workout in the morning,” said Director Cynthia Rose.

In addition to missing fewer work days, people who bike to work are healthier. Rose continued, “Besides the personal benefits, the more people that bike, that’s fewer cars on the road. We reduce traffic, congestion, and we reduce greenhouse admissions. And we make it easier for other people who do need to drive.”

Bike to Work Day also offers riders the perfect opportunity to overcome obstacles they feel keep them from biking to work. Rose explained, “Many people don’t realize that whatever barriers they think they have are manageable if we can get them to give it a try. We could highlight some of those challenges that people have and offer them solutions. Even if you never, ever bike to work, every person who does bike to work makes your commute easier.”

The beauty in riding to work is that there isn’t a right or wrong path to take. Rose added, “Whether you want to go straight to work or maybe take a little bit longer route that is more comfortable and enjoyable for you, different people have different thresholds. Some people have no problem taking the most direct route even though it is more congested or doesn’t have as many facilities for bikes. Some people, myself included, will often take a longer route just because it’s more enjoyable. For me, it’s not about getting someplace quickly; it’s getting there enjoyably on my bike.”

To encourage more people to get on their bikes and ride, there will be several pit stops throughout Santa Monica that offer giveaways, beverages and food, and useful information about cycling. From 7 a.m. to 10 a.m., Santa Monica City Hall, in partnership with Metro and Santa Monica Spoke, will provide a continental breakfast, hot and cold beverages, and gift packs for riders. Other pit stops include Downtown Santa Monica Inc., Moore Ruble Yudell, Crossroads School, Tradesy Inc., Shore Hotel, and Santa Monica- Malibu Unified School District.