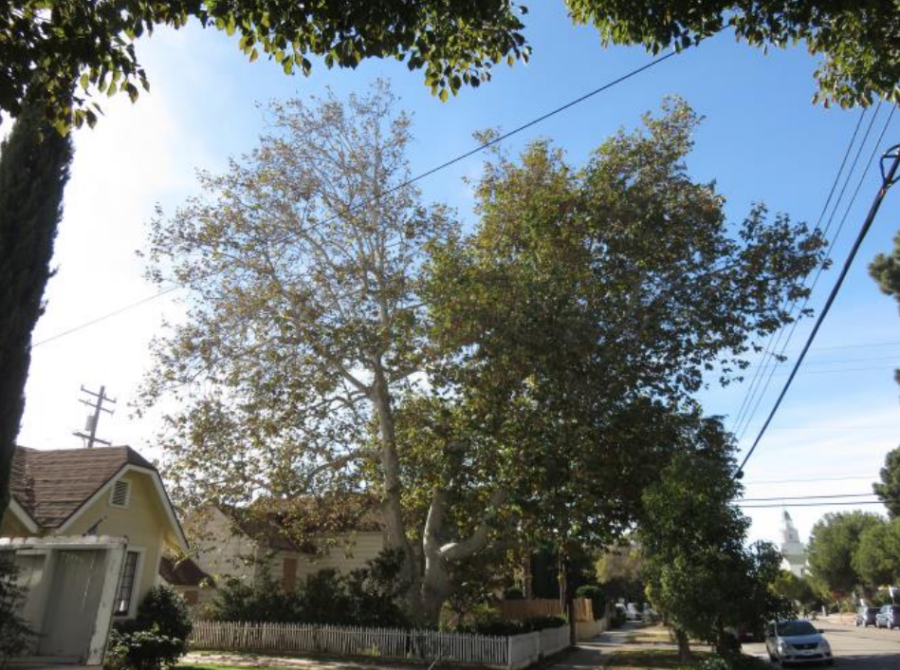 A nearly 100-year-old tree will be the center of attention at tonight’s Santa Monica City Council meeting.

The tree in question is a 97-year-old, 82-foot Western Sycamore tree located at 1122 California Avenue. On October 16, 2017, John C. Smith, on behalf of the Wilshire Montana Neighborhood Coalition (Wilmont), filed an application to designate the tree as a City Landmark.

“Santa Monica is rapidly losing its stock of aged trees on private land due to development,” Smith wrote in the application. “This tree has a large canopy of shade, a root system that prevents erosion and is home to owls peregrine falcons (protected) as well as other native species. It is also one of the largest and oldest trees (Sycamore) in the city.”

The Landmarks Commission, after conducting two public hearings on the application, on December 11, 2017, and May 14, 2018, and, in consideration of public testimony, reports and materials introduced into the public record, designated the tree as a City Landmark by a 4-2 vote. The Commission found that the tree met two of the six criteria for designation as a City Landmark as outlined in Santa Monica Municipal Code.

On May 24, 2018, the property owners, Iradj and Lesley Shahriary, filed an appeal of the Landmarks Commission’s decision to designate the tree. The appeal states that the subject tree does not meet any of the six criteria set forth in the Landmarks Ordinance for designation as a City Landmark. The appeal.

“Sycamore trees are not rare. There are many other western sycamore trees just as notable as the tree in question, found throughout the City,” reads the appeal. “Although large and more than 40 years old, this tree(s) is not unique, historic or culturally significant and therefore does not rise to the level of designation as a local landmark. In the 42 years since the Landmarks Ordinance was adopted, there have been only 5 trees designated as landmarks in the entire City. The subject tree(s) does not rise to the level warranting a landmark designation. This tree(s) does not even stand out on this particular block, let alone throughout the entire City.”

City staff is recommending the appeal be granted and the City Council deny the designation, based on the draft findings set forth in this report.