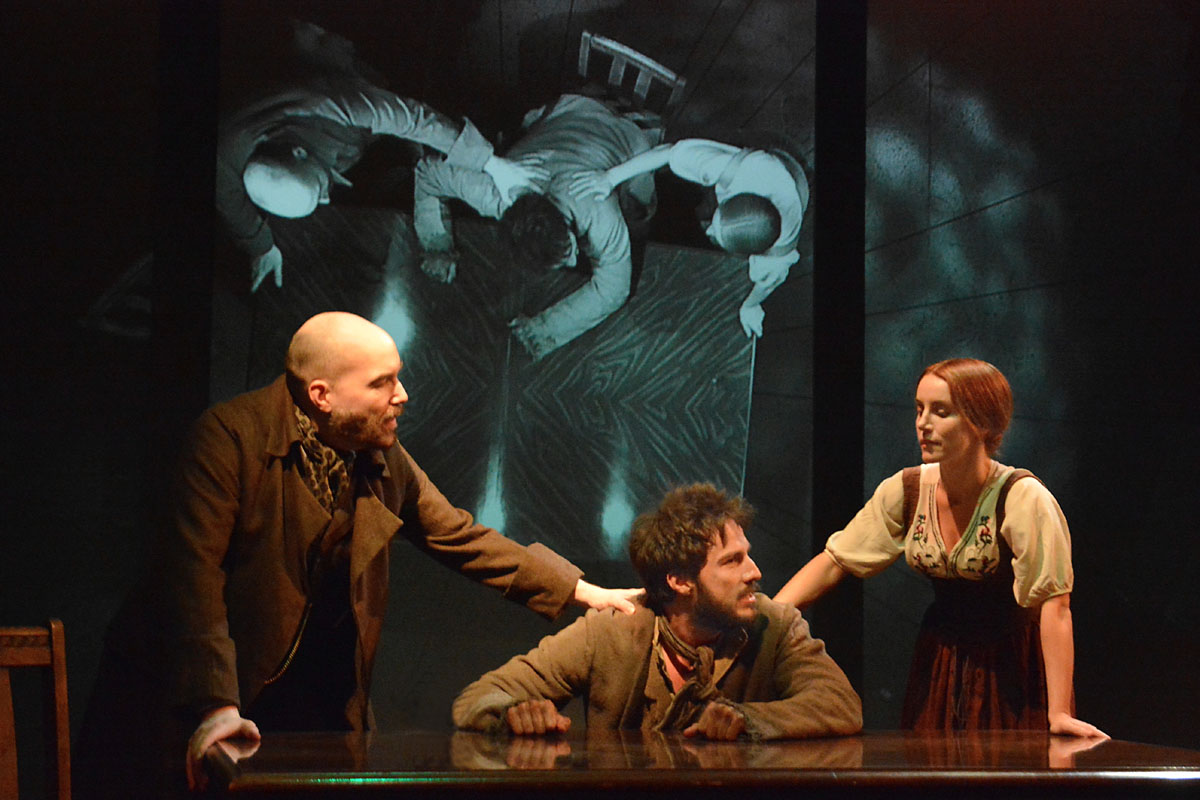 Before I launch into a review of the staged version of Fyodor Dostoevsky’s Crime and Punishment, a few words about this famous Russian novelist, short story writer, essayist, journalist, and philosopher who lived from 1821–1881.  Considered one of the world’s greatest novelists, his seminal works include, Crime and Punishment, The Idiot, Demons, and The Brothers Karamazov, with his novella, Notes from Underground, considered to be one of the first works of existentialist literature.  His works pierced deeply into the darkest recesses of the heart and soul of the human condition influencing 20th century fiction by such great writers as Franz Kafka, James Joyce, William Faulkner, Jean-Paul Sartre, Orhan Pamuk, and Ernest Hemingway.

Adapted for the stage by Marilyn Campbell and Curt Columbus and directed by Peter Richards, the play is performed on a bare-bones stage with sound and video designer Mark Van Hare’s live video feed enlarging the onstage action.  Sometimes doubling your pleasure is not the best call. That said, the story revolves around Raskolnikov, (Michael Trevino) a destitute former student struggling for his survival in St. Petersburg. The action begins with crafty inspector Porfiry, (Brian Wallace) interrogating him about a double murder that has just been committed.  The sequences are not linear and they move back and forth in time illustrating the story of Raskolnikov’s eventual rationale for killing the pawnbroker with whom he hocked whatever material goods he had left in the world, and accidentally whacked her sister as well who was simply guilty of being at the right place at the wrong time. It is here that we witness in part the existential moral psychology, which says ultimately that people of superior intelligence or power are above the law and are therefore granted the right to commit crimes, including deciding who should live or die.  (Does this sound eerily current?) Rounding out the characters is Lola Kelly’s Sonia, the hooker with a heart who works the streets to support her family, including her drunken father also played by Wallace. But do not despair, as being a religious man, Dostoevsky made sure to allow his character to experience guilt and redemption. Raskolnikov eventually pays for his crime with a promise from Sonia that they will run away to Siberia after he completes his prison sentence.

Now to Trevino’s performance:  Being a television star, one could understand why he was attracted to this rich part and perhaps he decided to pull out all the stops and create a character that he never had the opportunity to portray.  What he came up with was a physical life akin to someone with Sydenham’s Chorea known as St. Vitus Dance or as a person in the throes of an epileptic fit which manifests in frequent spastic movements of the face, neck, trunk, and extremities and is quite painful for the person experiencing such an attack, as well as those watching the suffering.   This acting choice seemed quite arbitrary and used for “effect.” Pardon me for being so graphic, but this will give you a sense of Trevino’s physicalization – twitching and grimacing his way through the entire performance. One wonders why director Richards didn’t help the actor sculpt a more acceptable, believable physical life. I must also fault the director for having the actors play multiple roles. While Wallace was excellent as the inspector and the drunken father, differentiated by wearing a pair of glasses, holding an empty vodka bottle, and walking with a limp, Kelly, fairly successful as Sonia, was not believable in the other roles of the pawnbroker, the landlady, and Raskolnikov’s mother, which she characterized by wearing a shawl, glasses, and walking in a bent position, sometimes delivering what amounted to line readings.  Costume designer Katherine O’Neill did a nice job clothing the actors in period costumes. But really, it looked like a high school production and bordered on silliness. The Crime? The production. The Punishment? Sitting through 90-minutes without an intermission.