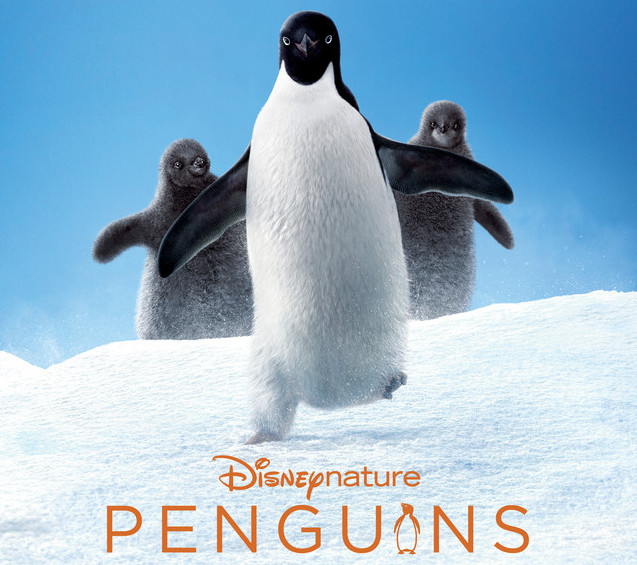 In celebration of Earth Day, Disneynature has released this remarkable documentary-story, “Penguins”, that follows the lives of a penguin named “Steve” and his family. Narrated with warmth and humor by Ed Helms (The Office, The Hangover), this is the 13th nature documentary released under Disneynature label, which celebrates its 10th year in existence. This movie is a story told using extraordinarily beautiful and rare shots of the Antarctic environment and its residents. Music by accomplished composer Harry Gregson-Williams skillfully complements the vastness and luminosity of the penguins’ environment.

Our Adelie Penguin Steve, who is just coming “of age,” is the star of the movie. We shadow him as he returns to the Adelie breeding ground for his very first experience finding a mate, building a nest and raising kids.  Directors Alastair Fothergill and Jeff Wilson zeroed in on Steve out of all the male penguins populating the nesting area as he was the one trying harder than all the others to build his nest, working through his frustration on getting it right. Other animals in the Antarctic, both friend and foe, make appearances in the film as well. Steve has treacherous and humorous experiences to navigate in his quest for survival in this unforgiving yet gorgeous continent.

The alternate heroes of this movie are Cinematographer Rolf Steinman and his team, who braved cold hazardous locations and powerful storms with icy hurricane force winds to capture the unfolding life stories of their energetic “cast” on high-resolution cameras.  The film was shot over a three-year period between October and February, the southern hemisphere’s spring and summer.

Viewing this movie, you may be surprised by how much the personalities of the “stars” of this “adventure film” stick with you. You may even recognize the traits of some of your friends in these perseverant, loyal and lovable creatures, whose voices are melodic and full of emotional inflection.

According to NASA’s biodiversity program, Adelie penguins are one of the species most at risk from the results of global warming. A percentage of the box office for the first weeks of “Penguins” goes to the Global Penguin Society for their great conservation efforts looking after the 17 species of penguins on our planet.

By Kathy Whitney Boole May 3, 2019
in News
Related Posts