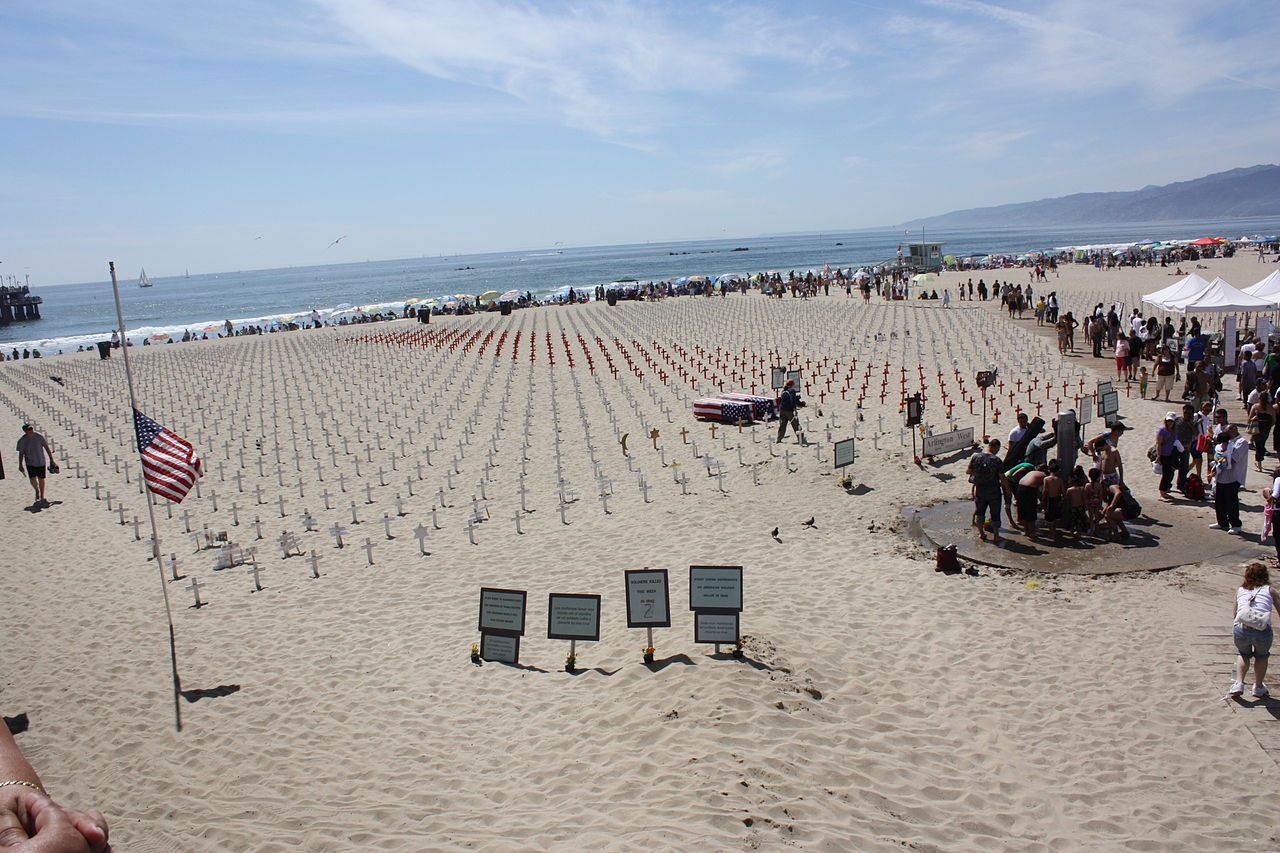 David Wilfong arrested for assault with a deadly weapon, elder abuse and mayhem.

In the early morning hours of Memorial Day on Monday, May 27, 2019, the Arlington West Memorial Santa Monica was desecrated and its veteran volunteers attacked by a homeless man.

The intrusion took place around 4:00 a.m. The memorial was up overnight in recognition of Memorial Day and veteran volunteers were there to monitor it throughout the evening and into the morning.

According to Greg Foisie, a memorial volunteer who supports the veterans was at the memorial during the altercation, a lone male attacker was swearing at and verbally abusing the veterans as he knocked down large memorial signs. Two complete rows of crosses were demolished by him, with the crosses being strewn around the memorial site. Then some of the crosses with metal spikes driven into their bases were thrown by the assailant directly at the veterans.

Then the perpetrator repeatedly screamed at the veterans while attacking them physically with a shovel, swinging it at the vets. He injured one veteran, VFP President Michael Lindley, hitting him in the head. Lindley was taken to the St. John’s Hospital by paramedics where he received stitches.

Once contacted through 911 by other bystanders, the Santa Monica Police Department (SMPD) immediately responded and handcuffed the individual who had torn apart the memorial and attacked the veterans.

As he was led into the Santa Monica Pier parking lot, the individual began cursing at the police officers before being driven away.

The suspect has been identified as David Wilfong, 36, and was charged with assault with a deadly weapon, elder abuse and mayhem. Wilfong was arrested at the scene by the SMPD and is being held on $100,000 bail.

The memorial in question is a weekly installation project of Veterans for Peace Los Angeles. Its purpose is to remember those military service members who have died, and to illustrate the human cost of war. It is one of five memorial erected by Veterans for Peace chapters on the west coast and the only one that is set up weekly basis. The other memorials are set up periodically around Tacoma/Seattle, Santa Barbara, Huntington Beach and close to Camp Pendleton near San Diego.

Veterans For Peace is a national, non-profit US veterans organization with about 140 chapters across the USA & around the world that is seeking to abolish war The Arlington West Memorial in Santa Monica has been set up and taken down every Sunday without mussing a single Sunday since February 15th, 2004 – over 15 years to date. The memorial seeks to educate the public about the reality of militarism and war.

In the past, the Arlington West Memorial Santa Monica has received a commendation from the City of Santa Monica, a regional “Salt of the Earth” award from Radio Station KPFK (one of five Pacifica Radio Network stations) and a national award from the national office of Veterans for Peace in St. Louis, Missouri.

Foisie says he is upset by the attack of the veterans and their memorial’s desecration.

“These veteran volunteers get up at 3:30 AM on Sundays to set up the Arlington West Memorial in Santa Monica. They have done so every Sunday for over 15 years. The memorial is reverential, yet illustrates very serious human problems and pronounces important messages that do not seem to be appreciated and understood by the public at large If this were not the case, we would be solving these problems as a society by now. Instead we are effectively ignoring or acting indifferently to what the veterans’ memorial portrays and symbolizes – issues of life and death. This Memorial Day attack at the Arlington West Memorial is merely the most extreme example of misunderstanding and/or indifference to what these remarkable veterans have undertaken for the past 15 years,” Fosie said.