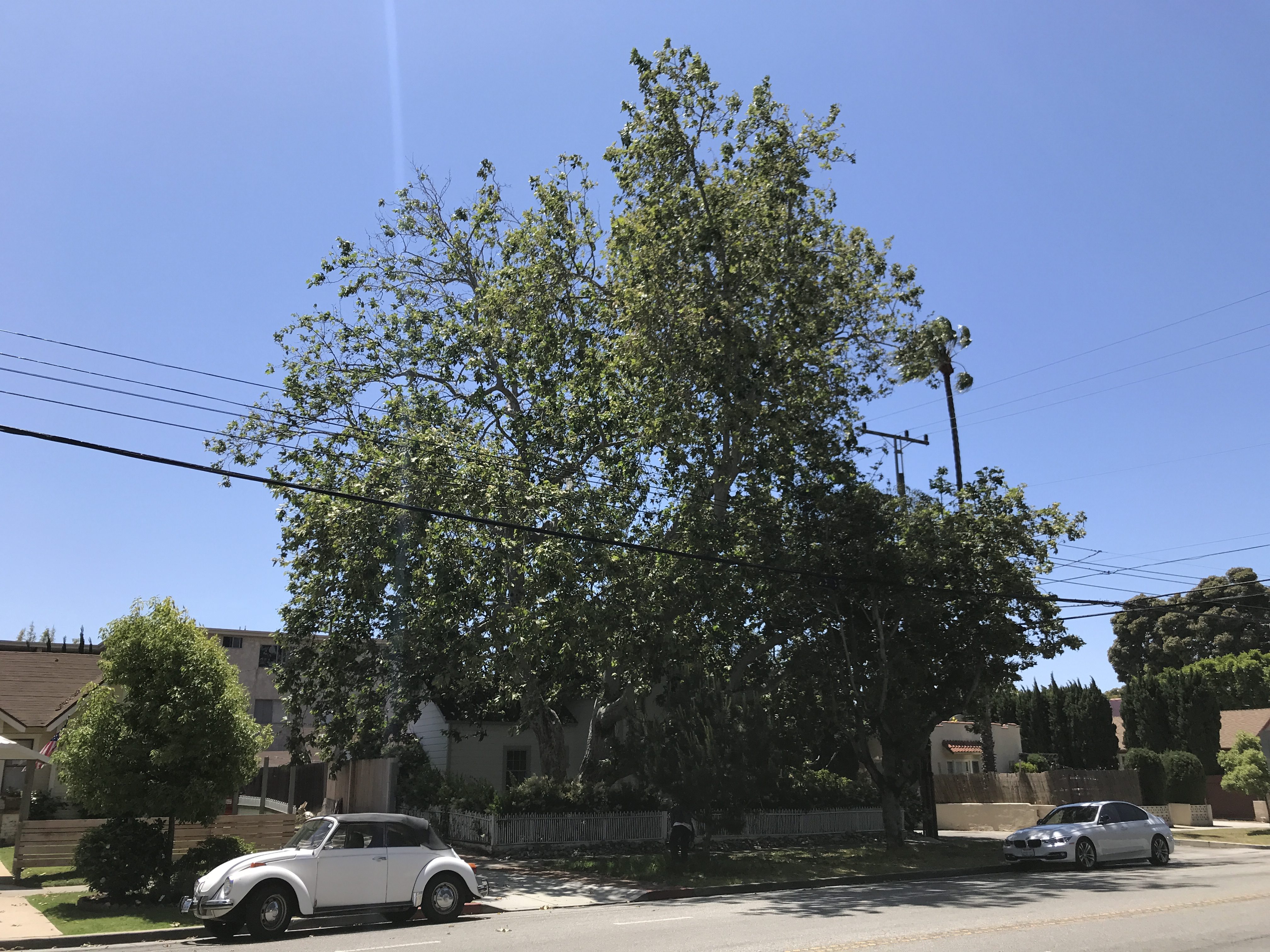 The trees at the heart of the debate are two intertwined  97-year-old, 82-foot Western Sycamore trees located at 1122 California Avenue. On October 16, 2017, John C. Smith, on behalf of the Wilshire Montana Neighborhood Coalition (Wilmont), filed an application to designate the tree as a City Landmark.

“Santa Monica is rapidly losing its stock of aged trees on private land due to development,” Smith wrote in the application. “This tree has a large canopy of shade, a root system that prevents erosion and is home to owls, peregrine falcons (protected) as well as other native species. It is also one of the largest and oldest trees (Sycamore) in the city.”

The Landmarks Commission, after conducting two public hearings on the application, on December 11, 2017, and May 14, 2018, and, in consideration of public testimony, reports and materials introduced into the public record, designated the tree as a City Landmark by a 4-2 vote earlier this year.

The Commission found that the tree met two of the six criteria for designation as a City Landmark as outlined in Santa Monica Municipal Code.

On May 24, 2018, the property owners, Iradj and Lesley Shahriary, filed an appeal of the Landmarks Commission’s decision to designate the tree. The appeal states that the subject tree does not meet any of the six criteria set forth in the Landmarks Ordinance for designation as a City Landmark. The appeal.

“Sycamore trees are not rare. There are many other western sycamore trees just as notable as the tree in question, found throughout the City,” reads the appeal. “Although large and more than 40 years old, this tree(s) is not unique, historic or culturally significant and therefore does not rise to the level of designation as a local landmark. In the 42 years since the Landmarks Ordinance was adopted, there have been only 5 trees designated as landmarks in the entire City. The subject tree(s) does not rise to the level warranting a landmark designation. This tree(s) does not even stand out on this particular block, let alone throughout the entire City.”

At the May 14 City Council meeting, the daughter of the owners Mayra Shahiary said that her family has no intention of cutting down the tree, but do not want to be burdened with what comes along the trees’ designation as a landmark.

After nearly four hours of public testimony and discussion by councilmembers, Council voted 4-2 to remove the trees’ landmark status but will negotiate a deed restriction with the property owners to protect the trees for two years.

“Trying to save this tree with our Landmarks ordinance is like trying to fix a bicycle with a shovel,” said Santa Monica City Councilmember Kevin McKeown.

Responding to the concerns of residents who worry that Santa Monica’s urban forest is declining, Council also passed a motion that directs City Staff to develop an ordinance that will protect trees on private property without having to assign them a landmark status.

“Nineteen years after I first raised the issue, Santa Monica is finally going to have a citywide ordinance of general applicability protecting significant trees from unnecessary removal,” McKeown said. “I hope our new tree ordinance will acknowledge large trees’ provision of shade, air-cleaning, and habitat, all deserving of protection because our urban tree canopy is part of the community commonwealth.  None of those are considered in our Landmarks ordinance.”

“The Sycamore must always be protected and cared for!,” said Jerry Rubin, a longtime Santa Monica activist. “Hopefully many more trees will also be protected when we finally get a private property tree protection ordinance.”