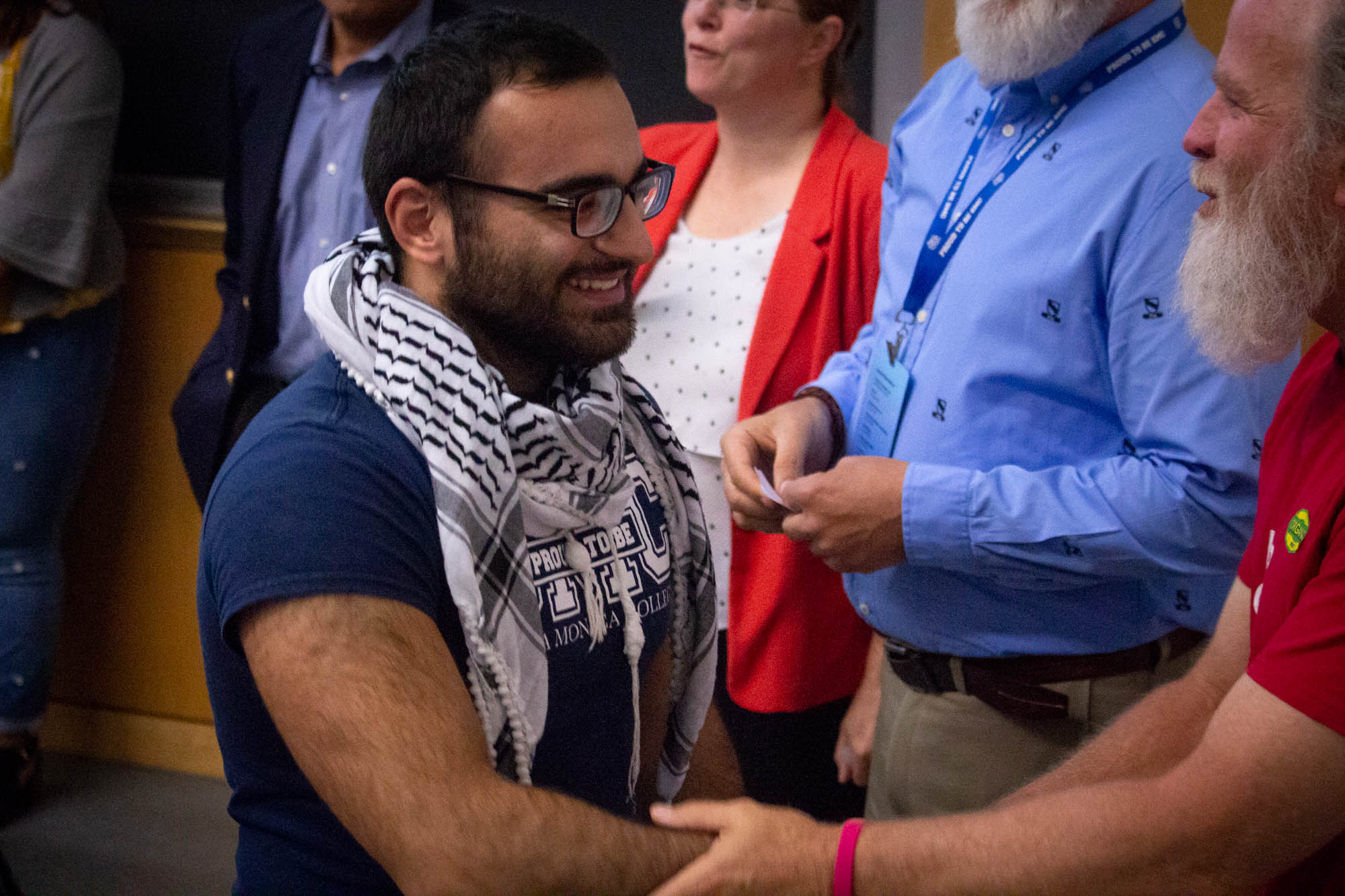 Santa Monica College (SMC) student Hesham Jarmakani has won the prestigious Jack Kent Cooke Foundation (JKCF) Undergraduate Transfer Scholarship. The highly competitive scholarship will provide him with up to $40,000 annually for a maximum of three years to complete his bachelor’s degree.

Jarmakani is one of 61 JKCF recipients this year, chosen from a pool of nearly 1,500 applicants. An Economics major with a minor in Political Science and part of the SMC Public Policy Institute, he is also currently vice president for SMC’s Associated Students. His goal is to become a lawyer and work for the United Nations Human Rights Commission, and he hopes to transfer to UC Berkeley, UCLA, or Columbia University.

From 2014 onwards, Jarmakani worked as a grocery store cashier and manager in the United Arab Emirates for two years as his home country Syria was under siege. He volunteered for an internship with the Syrian Arab Red Crescent to provide basic medical service and ease the suffering of his fellow Syrians. Upon reaching the U.S. he worked as an usher at The Broad Stage at the SMC Performing Arts Center.

At an April 23 SMC Phi Theta Kappa (PTK) Honor Society meeting with roughly 80 fellow students and SMC faculty & staff in attendance, Jarmakani was informed that he had won the JKCF scholarship (he is a former leader of the SMC honor society).

“After the first wave of speechlessness . . . I just feel blessed, honored, and I’m still at a loss for words,” said Jarmakani. “SMC helped develop my character to make me a more competitive person for the scholarship. The Associated Students government . . . provided me with a lot of leadership opportunities, and also provided me with that platform to be as vocal or as outspoken as I want to be on certain important issues that we do need to discuss.”

Jarmakani has helped review public policies within the City of Santa Monica, and is the former president of the SMC Model United Nations Club and former Vice President of Leadership for the SMC Phi Theta Kappa Honor Society; he is also current Director of Public Relations for the Students in Justice Palestine Club.

In addition to the monetary award, as a new Cooke Transfer Scholar, Jarmakani will receive comprehensive educational advising from the Foundation’s staff to guide him through the process of transitioning to a four-year school and preparing for his career. The JKCF will additionally provide opportunities for internships, study abroad, and graduate school funding, as well as connection to a thriving network of nearly 2,500 fellow Cooke Scholars and alumni.

He had some words of wisdom for his fellow students. “Don’t focus on the end goal . . . just transferring and getting out,” said Jarmakani. “The path is a lot more important than the journey in my opinion. Focus on doing whatever you have today—do it for the sake of doing it, don’t do it for the sake of putting it on your resume or getting a GPA boost. Be true to yourself, be honest, and just work hard.”

Nancy Grass, SMC’s Associate Dean of Student Life, was among two recommenders from the college for Jarmakani. “I was thrilled to learn that Hesham earned the JKC Scholarship! He has worked very hard as a student and a student leader,” said Grass. “He takes each of his roles very seriously, but always brightens a room with his smile and his encouragement. He is an exceptional young man that we can all be proud of.”

English professor Mario Padilla—who wrote the other letter of recommendation—remembered Hesham Jarmakani distinctly from his English 1 class. “He sat in the first row, was never late, was always the first student to raise his hand to participate in a discussion—and his critical thinking skills are off the charts,” said Padilla. “He is the paradigm of ‘scholar.’ And he’s a nice person—one of the nicest I’ve had the privilege to teach!”

“Our recent ‘Persistence’ report highlights the vast potential, and achievements, of community college transfer students — who go on to outperform their non-transfer peers at selective four-year institutions” said Seppy Basili, executive director of the Jack Kent Cooke Foundation. “In an era where many high-achieving students often begin their higher education journey in community college, the Foundation is committed to enabling these transfer students to pursue their academic dreams at the nation’s top colleges and universities.”

The Foundation evaluated the submissions based on academic ability, persistence, leadership, and service to others. The recipients selected represent 18 different states, have a median household adjusted gross income of $28,000 and an average GPA of 3.93. This year’s cohort of Cooke Transfer Scholars has applied to the nation’s most selective institutions. For more information, visit www.jkcf.org.