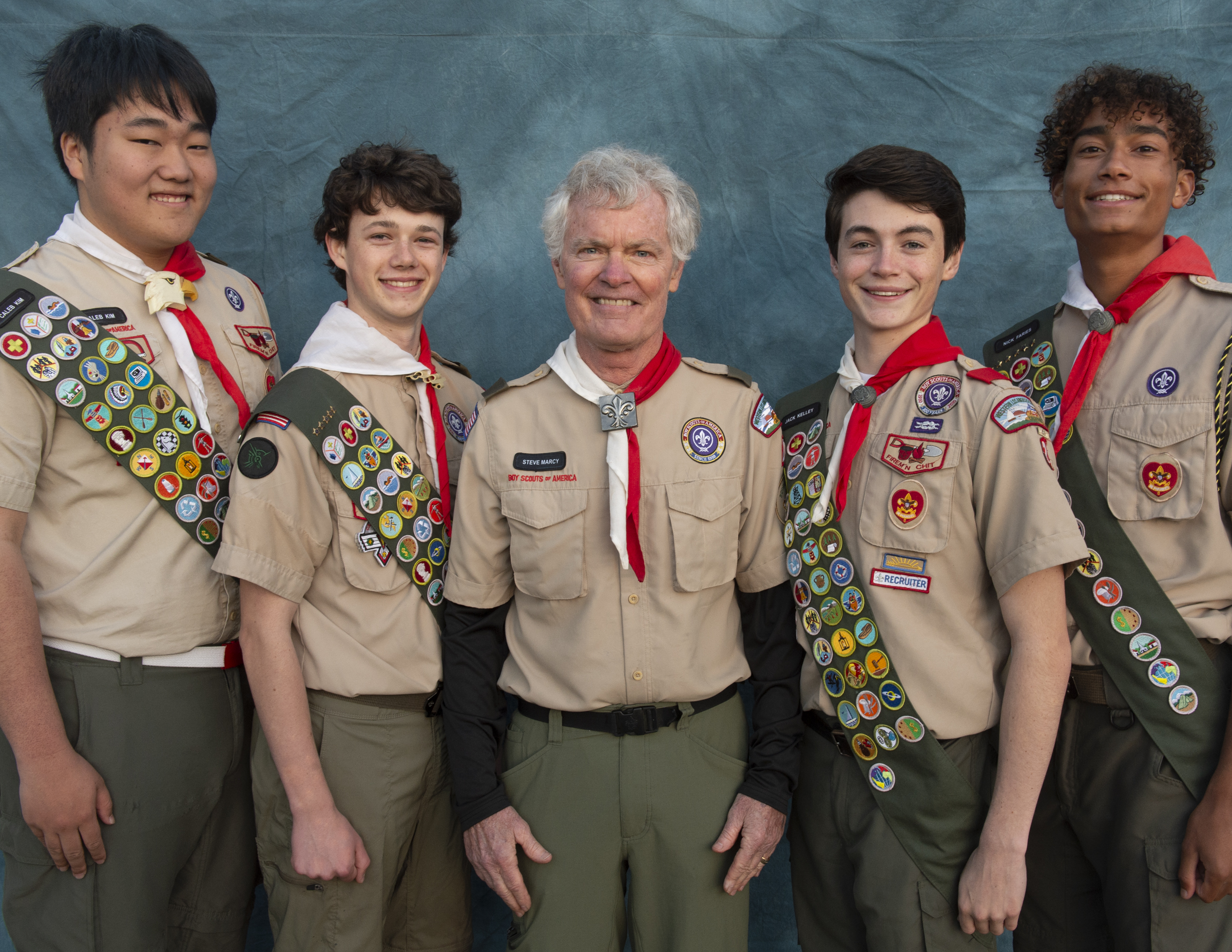 On Sunday, June 9, 2019, four Santa Monica teenagers were awarded the highest rank one can earn in the Boy Scouts of America.

The Eagle rank honors exemplary effort, leadership, and service. Only 6 percent of Boy Scouts achieve the rank of Eagle. In addition to demonstrating proficiency in first aid, citizenship, camping, swimming, emergency preparedness, and many other skills, Eagle candidates must coordinate and complete a community service project that demonstrates significant leadership abilities. Each of the Scouts being honored led a major project to improve quality of life in the Santa Monica community.

For his Eagle Project, Nicholas Faries gave new life to the entrance to Roosevelt Elementary School. He first asked the district to remove a dead palm tree, then Faries removed the weeds, pepper trees and roots from the area. This allowed for agapanthus to be spread across the whole area along with succulents, which Faries and his team planted. The entrance is now safer and more welcoming.

Jack Kelly’s project was to refurbish the cabinets in the kitchen and the dining area at the First United Methodist Church. This entailed sanding the old paint off the cabinet doors and the trim, painting it all with primer, then re-painting. Kelly finished the kitchen with new hardware. Refurbishing the kitchen allows for better dinners for the youth every Sunday and many other community groups that meet regularly.

Caleb Hope Kim’s project consisted of gardening, as well as building a wooden fence and planter, at Mount Olive Preschool. It created an extension of the campus in which the students could garden and learn outside while still being safe from the busy neighboring streets. When initially planning his project, Kim was determined to dedicate his community service project to the preschool he had attended, as it had led him all the way to graduating from Santa Monica High School

Ethan Mullane did his Eagle Project at the Heroes Golf Course in the Veterans Affairs center. The idea was to build a shed that could keep golf bags and clubs organized and sheltered from the weather, while also allowing for storing other things like supplies. He and his team dug trenches, set the foundation for a kit shed, and built custom shelves so that all the clubs could be set inside in an orderly fashion, while leaving space on the shelves above for tools and miscellaneous things. The shed will be there for years to come, and will continue to be useful, even if the purpose changes.

All projects included many hours of planning and manual labor by Troup 2 Scouts working together under the direction of the Eagle candidates.

Troop 2 is one of the oldest and largest Boy Scout troops in the western United States. In its 71-year history, Troop 2 has graduated 358 Eagle Scouts and traveled to Scout camps and high adventure destinations throughout the United States. Troop 2 Scouts are known to have saved at least 63 lives.