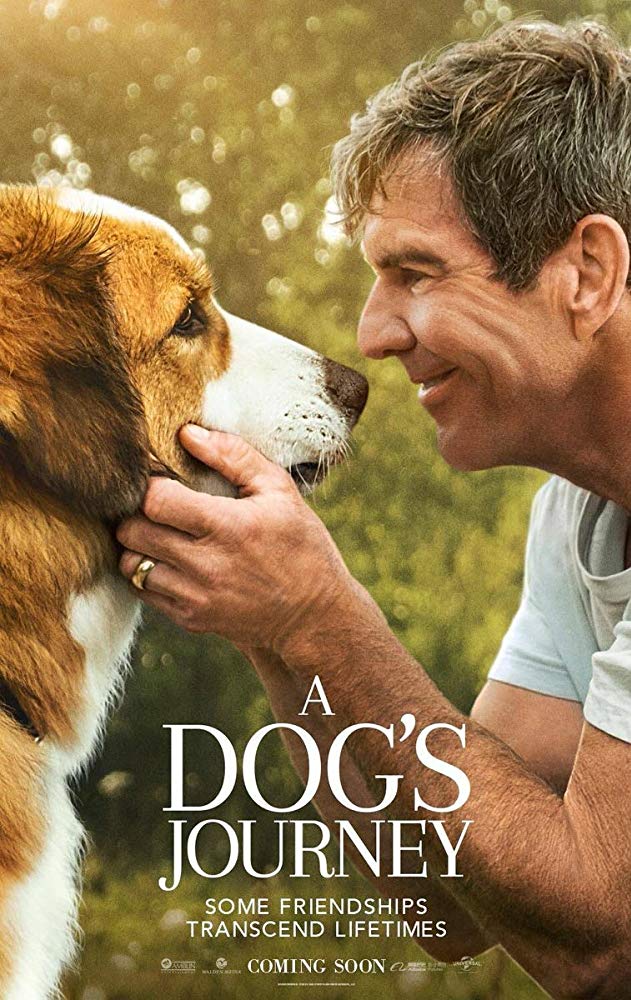 “A Dog’s Journey” takes you through a cinematic collection of heartfelt short stories about the intertwined lives of dogs and their humans. For anyone who is lucky enough to have known the love of a canine companion, this film may bring a few tears. It’s a sequel to A Dog’s Purpose, released in 2017. The same extended family from that movie is at the center of the new story. As the family members encounter the joys, pitfalls and tragedies that life brings, it is the spirit of their dogs that becomes the catalyst to bring out their better selves. The new film has the same writers who wrote the screenplay for A Dog’s Purpose. However the current film has a different director – Gail Mancuso, noted television director (Gilmore Girls, Modern Family, Rules of Engagement, Roseanne). This is her first feature film.

Dennis Quaid plays Ethan, the patriarch of the family. Quaid is one of the most underrated actors in the industry, and has been working in film and television since 1975. Marg Helgenberger (CSI) is his wife Hannah, the character portrayed in the first film by Peggy Lipton, who recently passed away. The rest of the cast gives honest performances – Kathryn Prescott as CJ, Henry Lau as Trent, and especially Betty Gilpin (Glow) as the troubled “Gloria.” There are several superb canine stars as well, all from decidedly different breeds and all voiced by the multitalented Josh Gad. Director Mancuso has done a great job of bringing the dogs’ expressions front and center, and the way she has constructed the film emphasizes the realization that dogs indeed have a highly developed emotional intelligence, which is less cluttered than that of their humans. A dog’s spirit is genuine and pure, and yes, we can definitely learn from them. Once you form a bond with a dog, it can never be broken. My only criticism: I would like to have seen deeper character development, and more of “Big Dog’s” story, one of the short narratives within the film.

The first few minutes of the movie may seem simplistic. However the dogs themselves will draw you into the movie. This is a wonderful kids’ movie. The story takes you through both happy times and circumstances that are frustrating and very difficult to bear, just as real life does. Emotional pain is hard to discuss with children, so here in this movie they can observe others dealing with hardship and sadness on screen. At the same time, adults will realize that there are no limits to the lengths that dogs will go to give balance to the lives of their unpredictable human partners.