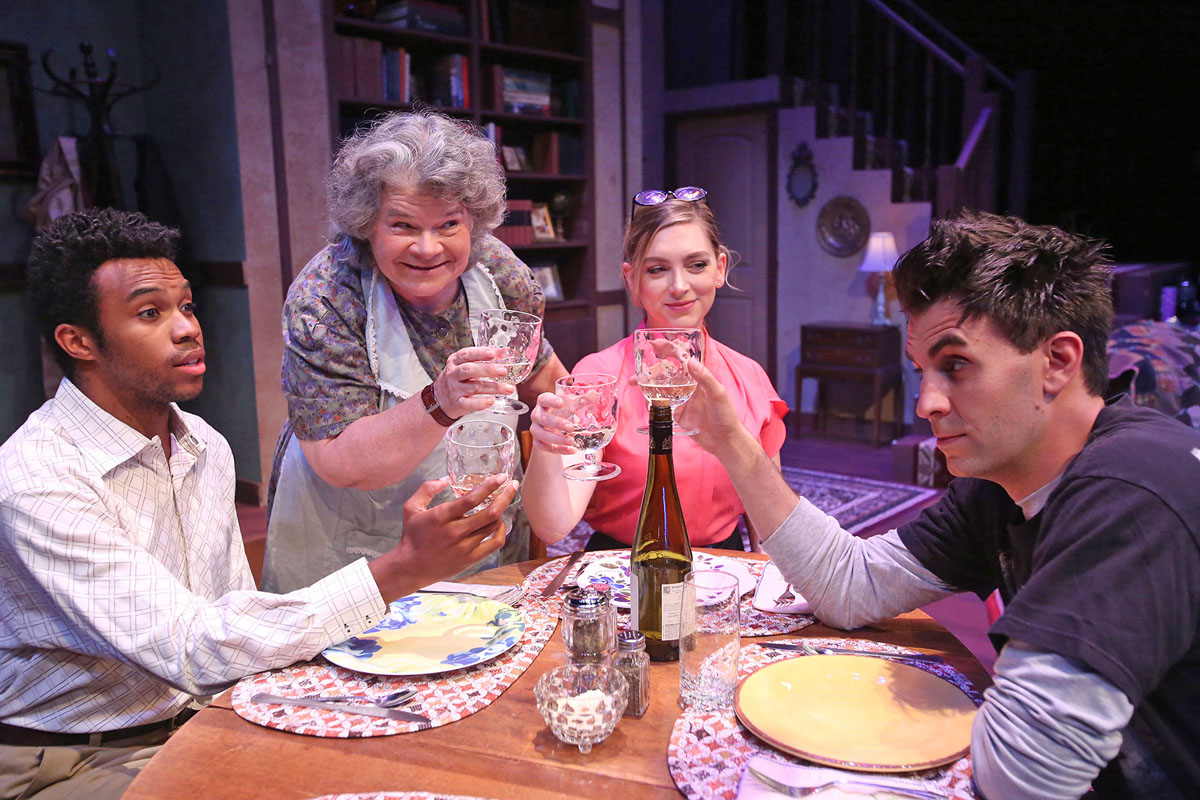 Any writer who has ever stared at a blank piece of paper will recognize the angst of coming up with that first line.  This is illustrated in the world premiere production of Peter Quilter’s BESTSELLER at the International City Theatre in Long Beach. The West End and Broadway playwright, whose plays have been translated into 27 languages and performed in over 40 countries, has written a clever script, which comically takes you into the hearts and souls of a group of writers who have converged on an isolated lakeside cottage in the British countryside for a retreat.  The loving proprietor of this temporary oasis for writers is Maureen, wonderfully played by Wendy Worthington who, in referring to writers, says such delicious lines as “They walk that tight rope between eccentric and psychotic.”

Under the mostly tight direction of Jane Page, the action begins with a young writer named Damien (Ian McQuown) typing away at his typewriter – yes, typewriter.  His forte is writing ultra-violent characters with a propensity for bizarre acts of mayhem. Referring to Damien’s work, Maureen quips, “If it gets to be too much, we keep the police on speed dial.”  The other writer is a rather flamboyant, and outrageously flirtatious  “Queen of Romance Novels” Shelley, (Alexandra Ruth Wright) a successful novelist who specializes in schmaltzy love stories using her serial romances and or engagements as fodder for her characters.  None of the men in her life are safe from her salacious pen. She admits, “Everything I write is pure trash.”  The final writer to appear is Alex, (Eric Myrick) who is devastated by recent traumatic events, when both his girlfriend and agent dumped him at the same time.  Regarding the actor playing Alex, it seemed his concentration waivered, so at times he looked uncomfortable and wasn’t quite sure of what to do with his body, sometimes resorting to a very subtle form of grimacing. What is particularly fun about this production is the playwright bringing to life the characters being written by the playwrights, all of which are characterized by the very talented Julia Davis and Sam Spanjian.  The first to emerge are from Shelley’s latest novel about two shipwrecked people who swim to a deserted island.  He is sexy and she is scantily clothed and being somewhat of an airhead, is more concerned about the fact that she lost her cell phone than being rescued.  She barks commands at him about building a shelter and finally exasperated he shouts, “I’ll collect the twigs – you go see if there’s an Ikea.”

Another set of characters that come to life is from Damien’s book called “The Necklace of Death.”  We see two murderers who have just bludgeoned someone to death and stole her necklace.  The male character looks like a stock Igor, the traditional cliché hunch-backed assistant or butler. His coat and face are covered in blood and according to his female boss, and ringleader of this murderous duo, comments that he looks like he got caught in an “explosion of a ketchup bottle.” Laugh lines abound throughout Quilter’s script, one of which is from Damien, “I may kill people, but it doesn’t stop me from having good manners.” At last Alex is unblocked and writes a story about a Russian couple – Tatiana and Victor.  Although separated for six years, neither one will leave their home.  So, the court orders a wall be built separating both sides of the house. The writer decides he doesn’t like the Russian characters so he changes them to an American couple living in Milwaukee named Brandon and Crystal.  Even though they are at each other’s throats, they are both uncertain about their separation and we hear the song “Never Can Say Goodbye,” a theatrical device created by sound designer Corwin Evans who reflects the action with the appropriate musical piece. Technically, Stacy McKenney-Norr’s scenic design and Christopher Scott Murillo’s lighting, nicely supports the production, although the exterior lighting did not reflect what we are to believe is a bad storm.

While many playwrights cannot write a strong second act, Quilter’s Act 2 is just as much fun as Act 1.  It begins with Igor sneaking down the stairs to search for the necklace, which he thinks is real “purty.”  His boss catches him in the act and holding a shotgun, insists that he toss the necklace to her. She snarls  “That’s the worst throw I’ve ever seen.”  The merriment continues and the shipwrecked Jessica and sexy Sergio are eventually rescued.  Soon the time arrives  for the writers to pack up their materials and head home. Maureen serves one last cup of tea to her departing guests.** Clearly, the funniest scenes are when the imaginary characters spring off the written page and come to life.  The pivotal character is Worthington’s Maureen who at one point reminisces about her husband Charles who disappeared during a walk around the lake. “Our love was gentle and easy like a summer breeze.”  She hopes that one day she will hear a knock on the door and he will reappear.  One of Quilter’s clever lines, “We’re all on the edge of madness,” could sum up the effect the political climate in Washington is having on the country. A temporary respite would be a ride down to Long Beach to catch this very entertaining evening of theatre.

*(Directing is acute attention to detail and one overlooked by Page is when Alex enters, supposedly with a rain-drenched umbrella and coat, both of which are completely dry.  That strains credibility as brushing off pretend raindrops from both the umbrella and coat is amateurish.)

** Note to director:  You might think about adding color to the water in both the wine bottle and teapot as the liquid appears to be plain water.)